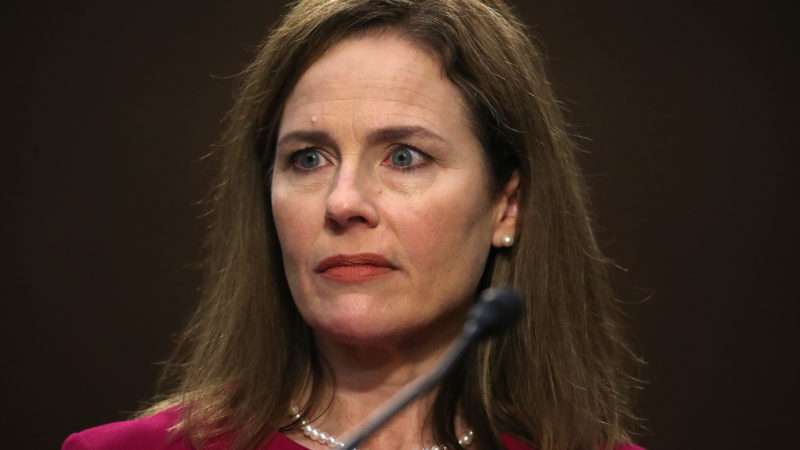 During Supreme Court nominee Amy Coney Barrett’s confirmation hearing today, several Democrats on the Senate Judiciary Committee worried that the 7th Circuit judge would vote to overturn the Patient Protection and Affordable Care Act. Sens. Chris Coons (D–Del.), Richard Blumenthal (D–Ct.), Mazie Hirono (D–Hawaii), Cory Booker (D–N.J.), and Kamala Harris (D–Calif.) all warned that such a decision would hurt Americans who depend on the law’s protections for patients with pre-existing conditions and its restrictions on coverage caps. They all described constituents who benefit from those provisions.

That argument is misleading for at least three reasons. First, while the predicament of patients like those described by Coons et al. figures prominently in the public policy debate about Obamacare, it is irrelevant to the legal question of whether the Affordable Care Act (ACA) is constitutional. Second, there is little reason to think that Barrett would in fact vote to overturn the law. Third, even if she did, there does not seem to be a majority on the Court in favor of that outcome.

As a Notre Dame law professor, Barrett criticized Chief Justice John Roberts’ controlling opinion in the 2012 case National Federal of Independent Business v. Sibelius, which implausibly construed the ACA’s individual health insurance mandate as a tax. Roberts did not want to uphold the requirement that every American buy government-approved medical coverage as an exercise of the congressional power to regulate interstate commerce because that position would extend the already stretched Commerce Clause into new territory. But he also did not want to overturn the mandate. So instead he treated it as an exercise of the tax power, notwithstanding all of the indications that it was meant to be a “penalty” for failing to make a legally required purchase.

“Chief Justice Roberts pushed the Affordable Care Act beyond its plausible meaning to save the statute,” Barrett noted in her contribution to a 2017 Constitutional Commentary forum on Georgetown University law professor Randy Barnett’s book Our Republican Constitution. “He construed the penalty imposed on those without health insurance as a tax, which permitted him to sustain the statute as a valid exercise of the taxing power; had he treated the payment as the statute did—as a penalty—he would have had to invalidate the statute as lying beyond Congress’s commerce power.”

Barrett rejected Barnett’s general argument that courts should be more active in overturning unconstitutional legislation, especially in the area of economic regulation. But she agreed with his criticism of Roberts’ opinion, saying “Barnett is surely right that deference to a democratic majority should not supersede a judge’s duty to apply clear text.”

Later that year, Congress passed a tax reform bill that eliminated the penalty for failing to comply with the health insurance mandate. Since the provision no longer raises any revenue, treating it as a tax is even more problematic now than it was in 2012. Given Barrett’s opinion that Roberts’ interpretation was already implausible, it is reasonable to expect that she would view the now-toothless mandate as unconstitutional. But that does not mean she would vote to overturn the law in its entirety.

The main issue raised by California v. Texas, a case that the Supreme Court is scheduled to hear on November 10, is whether the ACA can stand without the insurance mandate. The answer, as George Mason law professor Ilya Somin explains at The Volokh Conspiracy, depends on the Court’s approach to severability, the question of what happens to a statute when part of it is deemed unconstitutional. Barrett’s view of whether the individual health insurance mandate can reasonably be upheld as a tax tells us nothing about her views regarding severability.

Twenty Republican-led states, backed by the Trump administration, argue that the ACA cannot be upheld without the mandate. That position has been widely criticized by libertarian and conservative legal scholars, including Somin. “It’s unlikely that Barrett has a novel view of severability so restrictive that it would require collapsing the rest of the ACA in this case,” Somin says. And even if Barrett were receptive to the argument that the mandate cannot be separated from the rest of the law, he notes, at least six justices are not, judging from the positions they have taken on severability in other cases.

The predictions that confirming Barrett will doom the ACA, in short, should be viewed as Democratic fear mongering rather than realistic expectations. In any case, the fact that the ACA has benefited many Americans facing life-threatening illnesses, emphasized by one Democratic senator after another, has absolutely nothing to do with the constitutionality of the health insurance mandate or the question of severability, both of which are issues of law. As Sen. Thom Tillis (R–N.C.) noted today, Supreme Court justices “decide cases; they don’t make policy.”

Did Lying About Coronavirus Cover-Up The Fed’s Economic Destruction?

Fauci To Trump: ‘No More Rallies!’

Democrats Love To Promise Free College, So Why Did the U.K. Recently Start Charging Tuition?