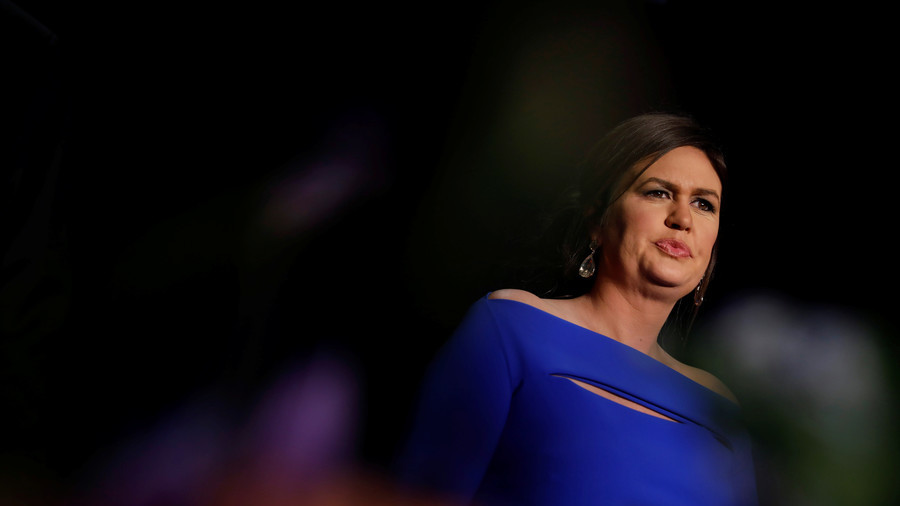 Liberals and conservatives are locked in a Twitter battle over the roasting of White House Press Secretary Sarah Huckabee Sanders at the correspondents’ dinner. Rulings range from “she deserved it” to “pathetic.”

The White House Correspondents’ Dinner is famous for poking fun at US officials, from presidents to secretaries of state and others. Even though the absent President Donald Trump got the usual share of mocking, it was the roasting of Sanders by comedian Michelle Wolf that is making waves in the Twittersphere.

Wolf compared Sanders to Aunt Lydia in The Handmaid’s Tale (a major villain) and went on to call her “resourceful” because she “burns facts and uses the ash to create a perfect smoky eye.”

Wolf also ended up referring to Sanders as: “What’s Uncle Tom but for white women who disappoint other white women?”

The roast prompted responses from all sides, reaching the top of Twitter trends in the US on Sunday morning. Conservatives, unsurprisingly, vented their anger.

Former Republican Congressman Joe Walsh stated that Sanders displayed “class and dignity” while being attacked by Wolf, an “out of touch, nasty, bigger, Hollywood lefty elite.”

Who cares about Michelle Wolf? She’s just another out of touch, nasty, bitter, Hollywood lefty elite.

I’d rather focus on the class and the dignity displayed last night by @PressSec. Well done Sarah.

And others went on grumbling about the political motivation of the mocking.

These women are all strong & resilient. They see their enemies for who they really are-jealous & still suffering from the defeat of HRC. Their merciless mocking of Sarah Sanders was pathetic & politically motivated. I would hope my daughters show such strength against the bullies

Meanwhile, political activist and commentator CJ Pearson, who has already made waves in the conservative world despite being only 15 years old, said he empathized with Sanders. “The Left hates free-thinking women just as much as they hate free-thinking blacks,” he wrote.

If they can’t control you, they try to destroy you. #WHCD#MAGA

The winner of last night was hands down @PressSec. Sitting poised and beautiful as #wchd comedian Michelle Wolf reminded us how ugly we can be when tearing another person down. I hope this inspires us all to be better, kinder, non-judging people.

Sincere and heartfelt THANKS to @maggieNYT for having guts to publicly denounce the vicious vile attack on @PressSec at WHCD. @PressSec handled it professionally but I pray her kids never see that. I pray more they never bully another person like that. https://t.co/UeJEaXTt8T

Another person took that word a bit further, calling it a “disgrace to all women.”

Sarah Huckabee Sanders was beautiful last night, what they did to her was a disgrace not only to her be to all women. Sad night!

In the other political camp, tweets were praising the roast as something Sanders deserved as Trump’s press secretary.

TRUE STORY: Sarah Huckabee Sanders is ugly not because of her physical appearance, but because she lies to the American people on a daily basis.

MORAL OF THE STORY: Lying is ugly and lying to cover up for the treasonous president of the United States is even uglier.

Journalist and entrepreneur Ed Krassenstein called the roasting of Sanders “glorious,” stating that it was “like watching a school bully being put in place in front of his entire school.”

Watching Sarah Huckabee Sanders’ reaction to Michele Wolf’s roast of her at the White House Correspondents dinner, was like watching a school bully being put in place in front of his entire school by the smart, funny nerd that she picks on. It was glorious! #WHCD

Some pointed out that Trump has a less-than-great track record when it comes to referencing women, including former presidential candidate Carly Fiorina.

Let’s look at what Trump has said about women:

About Mika B.: “She was bleeding badly from a face-lift.”

About Carly F.: “Look at that face! Would anyone vote for that?”

Let’s be real, if Sarah Huckleberry was a democrat, president Trump would be criticizing her physical appearance.

One person tweeted to Sanders to express hope that the way she was treated will make her understand “how innocent groups of people your boss insults and belittles feel.”

To @PressSec Sarah Huckabee Sanders. I’m sorry you were hurt tonight. Bottle up that hurt and pain at being insulted and mocked.

Then, tomorrow, unbottle it, and consider that this is how innocent groups of people your boss insults and belittles feel.

And rethink your life.

There has been no reaction from Sanders herself. Footage later showed her all smiles while talking to Chris Christie, the former New Jersey governor and US presidential candidate.

Fake Outrage! Sarah Huckabee Sanders aka Aunt Coulter was “fine” after Michelle Wolf’s roasting at #WHCD – Here she is afterwards yucking it up with discarded Trump flunkie Chris Christie. pic.twitter.com/M0TyqHYrzR