Bank You BILLINGSGATE POST: Joe Kocolochek, a retired farmer from Beaver Crossing, Nebraska, had taken all he could. After surviving… 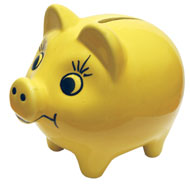 BILLINGSGATE POST: Joe Kocolochek, a retired farmer from Beaver Crossing, Nebraska, had taken all he could. After surviving fifty years with his termagant wife, he decided that he had to take action. Anything would be better than spending another day listening to her constant harping; mostly about his penchant for throwing darts at their wedding picture.

Kocolochek was a simple man, proud of his Bohemian heritage. He didn’t mind at all when his friends called him a “Dumb Bohunk.” Belying this, he was his high school valedictorian, passing on a scholarship to Yale because he didn’t trust snooty North Easterners. His collection of Viet Cong ears that he scored while serving in Vietnam was displayed in a glass exhibit more fit for butterflies.

There was only one bar in Beaver Crossing. He and his retired friends were all farmers, and most every day they would sit around the card table at Dugans playing poker and drinking beer. They laughed a lot, mostly when they were able to cheat Ernie Yokum who was nearly blind from his cataracts. Ernie was a good sport. He knew he was getting screwed, enjoying it in a perverted way. But then, Joe would finally have to go home and face the wife.

It was the first day of April. He walked into the National Bank of Beaver Crossing, which was owned by his old buddy, Ben “Bucky” Beaver. Bucky was born lucky; his father started the bank and once held mortgages on nearly every farm in the county. The town was incorporated in 1927 and bore his family name "Beaver." Townfolk added “Crossing” later. Bucky's old man had foreclosed on all the loans and took their farms during the Great Depression. It was short for "Double Crossing."

“Howdy do to you too, Joe. What can we do for you today?”

Joe handed a note to Bucky:

“This is a stick up. I’m robbing your f*cking bank. Clean out all your cash drawers and fork it over to me. I gotta gun.”

After Joe got the cash, he sat down in the lobby until the police came. After listening to him explain that jail would be better than going back to his wife, they put him under house arrest; his wife to supervise over him.

NOTE: This is a true story. Only the names were changed to protect the innocent.