US President Donald Trump has said he had “chemistry” with the CIA Director Mike Pompeo, but didn’t see eye to…

US President Donald Trump has said he had “chemistry” with the CIA Director Mike Pompeo, but didn’t see eye to eye with Rex Tillerson. Pompeo has replaced Tillerson as Secretary of State.

“I worked with Mike Pompeo for quite some time,” Trump told journalists following his decision. He added that he was “always on the same wavelength” with the former CIA director, and praised his “tremendous energy” and “tremendous intellect.”

Trump announced earlier on Tuesday that he had fired Tillerson and replaced him with Pompeo. The deputy director of the CIA, Gina Haspel was appointed to succeed Pompeo as the head of the US intelligence service.

“As far as Rex Tillerson is concerned, I very much appreciate his commitment and his service,” the president said, calling the former top diplomat “a good man.” Trump also said he “got along” with Tillerson “quite well,” while admitting that the two “disagreed on things.”
He specifically mentioned the Iran nuclear deal as one major point of disagreement. “We were not really thinking the same,” Trump said, referring to Tillerson’s attitude towards the deal. At the same time, the president said that he and Pompeo “have a similar thought process.” 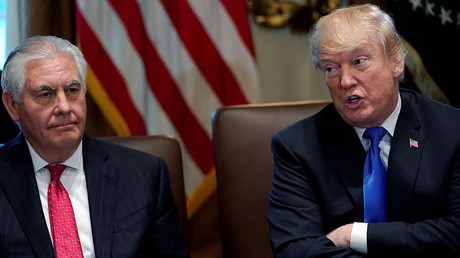 “I wanted either to break it or do something [with it],” Trump said of the Iran deal, adding that Tillerson “felt a little bit differently” about it.

The former top US diplomat did appear to have had a more moderate attitude towards the accord.
He repeatedly spoke of “fixing” the deal rather than scrapping it. In early January, it was reported that he was working with congressional leaders “on a very active basis” to draw up legislation that would “fix” the Iran deal. “The president said he is either going to fix it or cancel it,” Tillerson told AP at the time, adding that “We are in the process of trying to deliver on the promise he made to fix it.”

Later the same month, Tillerson said “some areas” of the deal should be “addressed” after he met with British Foreign Secretary Boris Johnson. He also said the US would send a diplomatic team to Europe to explore ways to “address the flaws” in the nuclear agreement.
However, Trump pursued a hardline approach to the agreement, which he called “the worst deal ever.” He also repeatedly threatened to pull out of the accord.

I Am a Book Critic. Here’s What Is Wrong With “Black Lists” — and What Is Good.