Spread the love      Tweet    (Consortium News) — The announcement on Wednesday that the U.S. will withdraw all remaining troops… 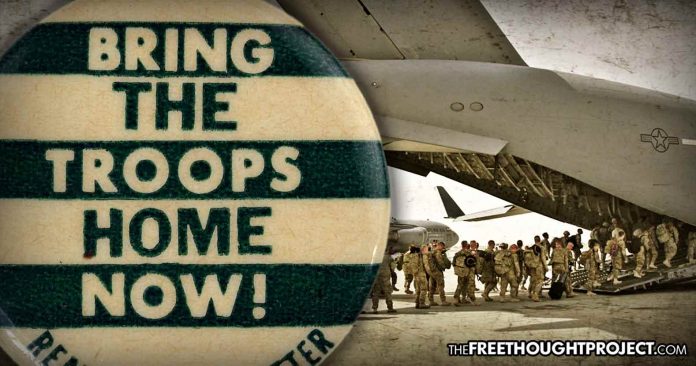 (Consortium News) — The announcement on Wednesday that the U.S. will withdraw all remaining troops from Syria within the next month looked at first like a rare victory for Donald Trump in his admittedly erratic opposition to senseless wars of adventure. “We have defeated ISIS in Syria, my only reason for being there,” the president tweeted with an unmistakable air of triumph.

Don’t get your hopes up. Just about everything in these initial reports is either wrong or misleading. One, the U.S. did not defeat the Islamic State: The Syrian Arab Army, aided by Russia, Iran, and Hezbollah militias did. Two, hardly was ISIS the only reason the U.S. has maintained a presence in Syria. The intent for years was to support a coup against the Assad government in Damascus—in part by training and equipping jihadists often allied with ISIS. For at least the past six months, the U.S. military’s intent in Syria has been to counter Iranian influence.

Last and hardly least, the U.S. is not closing down its military presence in Syria. It is digging in for an indefinite period, making Raqqa the equivalent of the Green Zone in Baghdad. By the official count, there are 503 U.S. troops stationed in the Islamic State’s former capital. Unofficially, according to The Washington Post and other press reports, the figure is closer to 4,000—twice the number that is supposed to represent a “full withdrawal” from Syrian soil.

It would be nice to think Washington has at last accepted defeat in Syria, given it is preposterous to pretend otherwise any longer. Damascus is now well into its consolidation phase. Russia, Iran, and Turkey are currently working with Staffan de Mistura, the UN’s special envoy for Syria, to form a committee in January to begin drafting a new Syrian constitution.

It would also be nice to think the president and commander-in-chief has the final say in his administration’s policies overseas, given the constitution by which we are supposed to be governed. But the misleading announcement on the withdrawal of troops, followed by Trump’s boastful tweet, suggest something close to exactly the opposite.

As Trump finishes his second year in office, the pattern is plain: This president can have all the foreign policy ideas he wants, but the Pentagon, State, the intelligence apparatus, and the rest of what some call “the deep state” will either reverse, delay, or never implement any policy not to its liking.

Syria is a case in point, but one among many. Trump announced in March that he would withdraw American troops as soon as the fight against ISIS was finished. By September the Pentagon was saying no, U.S. forces had to stay until Damascus and its political opponents achieved a full settlement. From the new HQ in Raqqa, The Washington Post tells us, U.S. forces will extend “overall control, perhaps indefinitely, of an area comprising nearly a third of Syria.”

This is how 2018 has gone for Trump. This president has very few good ideas, but we can count on his foreign policy minders to block those he does have if they fail to conform to the orthodox playbook—the foreign policy “blob,” as Barack Obama famously called it.

Earlier this month Trump complained about the Pentagon’s out-of-control budget and pledged to cut it, if marginally, from its current $ 716 billion to $ 700 billion in the 2020 fiscal year. “I am certain that, at some time in the future,” he said in one of his inevitable tweets, “President Xi and I, together with President Putin of Russia, will start talking about a meaningful halt to what has become a major and uncontrollable Arms Race. The U.S. spent 716 Billion Dollars this year. Crazy!”

Days later the president had a meeting with Defense Secretary James Mattis and the chairmen of the House and Senate Armed Services Committee. The White House announced immediately afterward that the three had agreed on a 2020 defense budget of $ 750 billion: from a 2 percent cut to an increase of nearly 5 percent in the course of one meeting.

Trump’s idea of improving relations with Russia has faced a wall of opposition from the first, needless to say. His summit with President Putin in Helsinki last July ignited a fresh uproar—and his suggestion that Putin come to Washington in the autumn still another. With Director of National Intelligence Dan Coats in the lead, that invitation was mocked to death within days. A New Year’s prediction: There will be no second summit with Putin, probably for the duration of Trump’s term in office.

Among the biggest disappointments of the year has been the administration’s failure to build on Trump’s effort to advance a settlement with North Korea after seven decades of tension in Northeast Asia. The Trump–Kim summit in Singapore last May did what initial encounters between heads of state are supposed to do: It established a working rapport. By that measure, any detached judgment of the meeting would have to count it a success.

But the U.S. press uniformly criticized Trump nonetheless for not coming home with the full details of the North’s nuclear disarmament. These same media have since treated us to the usual stories, sourced from the intelligence agencies, that the North is misleading us once again. Result: A second summit appears to have fallen off the White House’s agenda despite Trump’s statement at the UN last autumn that the two leaders would meet again “quite soon.”

One does not have to entertain any liking for Donald Trump to find this pattern disturbing. It suggests that our foreign policy cliques, wedded to an orthodoxy devoted more or less entirely to U.S. primacy, have positioned themselves—over the course of many administrations—to dictate America’s conduct abroad even to our presidents. There is danger in this, no matter who the occupant of the White House happens to be.

Patrick Lawrence, a correspondent abroad for many years, chiefly for the International Herald Tribune, is a columnist, essayist, author, and lecturer. His most recent book is Time No Longer: Americans After the American Century (Yale). Follow him@thefloutist. His web site is www.patricklawrence.us. Support his work via www.patreon.com/thefloutist.

Please give to our end-of-year fund drive, by clicking Donate.