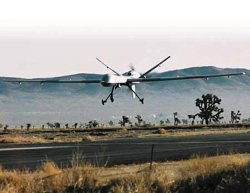 Better than "the dog ate it"…

Police are investigating an incident in which a student from a local school alleged that, whilst he was busy doing his homework on Monday night, a drone came through his open bedroom window, and stole the book from under his nose!

The incident happened at around 9pm last night in Battambang, when the 10-year-old boy had finished his tea, followed by a glass – or maybe two – of rice wine, then settled down to complete his homework task, a Science exercise set by his teacher, Moys Kenwood.

According to the boy, he had "almost finished", when there was a whirring sound outside the window, then the drone entered, hovered over the boy, then grasped his exercise book and flew out of the window again.

No other eyewitnesses were available.

The police, who didn't even know what a drone was, until it was explained to them, have promised to keep a sharp eye out for it and the homework, in between their frequent long periods of beauty sleep.