The Russian State Duma has refused to pass a draft address describing the activities of former leaders Mikhail Gorbachev and Boris Yeltsin, which led to the fall of the Soviet Union, as “destructive and anti-national.”

The rejected address was drafted by the nationalist-populist opposition party, the LDPR. “For the sake of historical justice it’s necessary to give an assessment of political activities of the first Soviet President Mikhail Gorbachev and first Russian President Boris Yeltsin, recognizing these activities as destructive and anti-national,” the document read, as quoted by RIA Novosti. 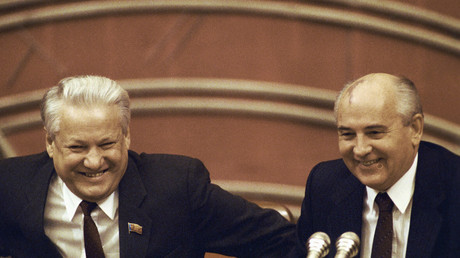 LDPR members said the policies of Gorbachev’s Perestroika and the subsequent market reforms launched by Yeltsin “worsened the situation inside the country and Russia’s positions on the international arena” and urged the current generation of Russian politicians not to repeat the mistakes of the past.

The lower house committee for regulations and control rejected the draft address, but noted that its members “shared the regrets of the document’s authors.” The committee experts wrote that the address lacked particular examples of wrong and harmful decisions made by Yeltsin and Gorbachev or some proof that the dramatic events of this period of Russian history came about as a result of these decisions.

In earlier comments on the LDPR’s initiative, Gorbachev branded the move an attempt to increase tensions within Russia. The first and only Soviet president also promised to take no reciprocal steps against the LDPR but said that the party should be dissolved over actions which create strife among citizens.