Seven Palestinians, including a local militant commander, have been killed during a covert Israeli operation in Gaza, Palestinian officials say…. 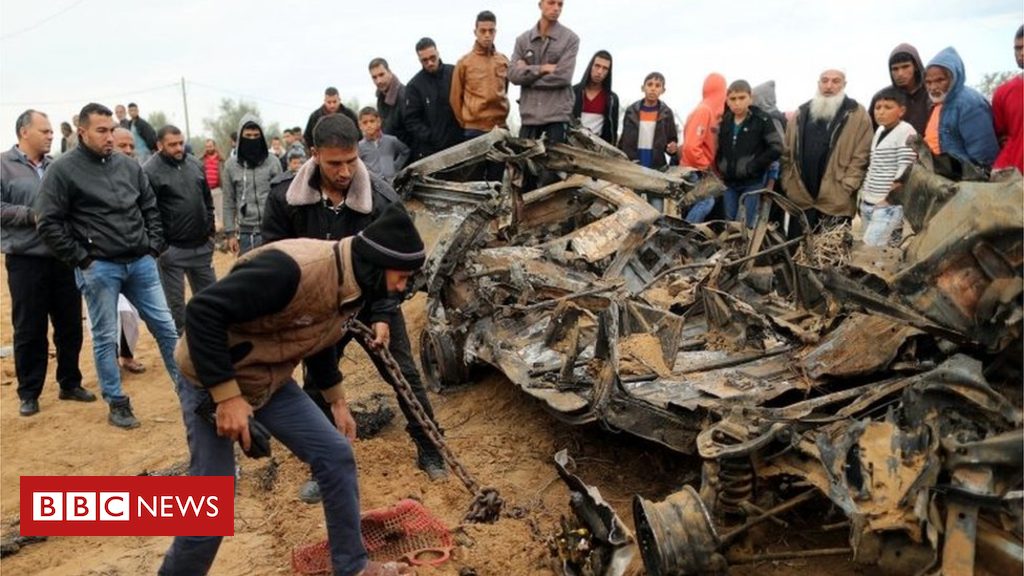 Seven Palestinians, including a local militant commander, have been killed during a covert Israeli operation in Gaza, Palestinian officials say.

An Israeli soldier was also killed and another wounded, the Israeli military said, after a firefight erupted.

Palestinians said an Israeli unit travelling in a civilian vehicle had killed the Hamas commander.

Sirens later sounded in communities across southern Israel and rockets were fired from Gaza, without causing harm.

According to Palestinian sources, the Israeli unit was about 3km (2 miles) inside the Gaza Strip, which borders Israel, when it fired at Nur Barakeh, a commander of the Izzedine al-Qassam brigades, Hamas’ military wing.

The incident is reported to have happened east of Khan Younis, in the south of the territory.

A gun battle erupted and Israeli tanks and aircraft opened fire in the area, witnesses said.

Six of the Palestinians killed belonged to Hamas – the militant Islamist group which controls the Gaza Strip – and the seventh was a member of the militant Popular Resistance Committees, AFP news agency cited Palestinian officials as saying.

The Israel Defense Forces (IDF) said a member of the special unit involved was killed and another was lightly wounded.

In the wake of the clashes, Israeli Prime Minister Benjamin Netanyahu cut short his visit to Paris for events to mark the 100th anniversary of the end of World War One and returned to Israel, his office said.

Why did Israel kill the commander?

Due to the secrecy of the operation, Israel has not revealed specific details about the mission.

The IDF said though that the operation was “not intended to kill or abduct terrorists, but to strengthen Israeli security”.

The BBC’s Tom Bateman in Jerusalem says that according to a former Israeli general, the incident was likely to have been an intelligence gathering operation that went wrong.

The exposure of such an operation by Israeli special forces inside Gaza would be extremely rare, he says.

What have both sides said?

Fawzi Barhoum, a spokesman for the group, denounced the incident as a “cowardly Israeli attack”.

The Israeli military said that after the clashes 17 rockets had been fired from Gaza into Israel and three were shot down.

Why are Israel and Hamas in conflict?

While Mr Abbas’ umbrella Palestine Liberation Organisation (PLO) has signed peace accords with Israel, Hamas does not recognise Israel’s right to exist and advocates the use of violence against it.

Israel, along with Egypt, has maintained a blockade of Gaza since about 2006, in order, they say, to stop attacks by militants.

Israel and Hamas have gone to war three times, and rocket-fire from Gaza and Israel air strikes against militant targets are a regular occurrence.

Sunday night’s incident comes after apparent progress in an Egyptian- and UN-brokered process to mediate after a series of escalations between the two sides in recent months.

More than 200 Palestinians in Gaza have been killed by Israeli forces since the end of March – most during weekly protests along the border at which thousands have expressed their support for the declared right of Palestinian refugees to return to their ancestral homes in what is now Israel.

Israel has said its soldiers have only opened fire in self-defence or on potential attackers trying to infiltrate its territory under the cover of the protests.

One Israeli soldier was killed on the Gaza-Israel border by a Palestinian sniper in July.