Elizabeth Warren’s wealth tax is the worst form of stunt policy: a bad idea that gets us nothing. Also, of… 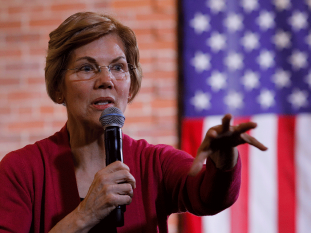 Elizabeth Warren’s wealth tax is the worst form of stunt policy: a bad idea that gets us nothing.

The plan, released last week as the Massachusetts senator launched her bid for the Democratic Party’s 2020 presidential nomination, would impose a 2 percent annual tax on assets for households worth more than $ 50 million, plus a 1 percent surtax on households with a net worth of $ 1 billion or more.

Warren says the tax would affect only the “tippy top 0.1%,” or about 75,000 households. She has framed the proposal as a way to make them “pay their fair share,” to reduce wealth concentration, and to “accelerate badly needed investments in rebuilding our middle class.” Estimates from the Berkeley economists Emmanuel Saez and Gabriel Zucman, who back the proposal, suggest it would raise about $ 2.75 trillion in new tax revenue over a decade.

So it’s being advertised as a revenue raiser that boosts the government’s capacity to fund programs for the middle class. But the real-world experience of nations that have imposed wealth taxes suggests that this is a bit optimistic. Regular wealth taxes tend to be a challenge for tax collectors. They require annual assessments of wealth, and the very rich tend to own unique assets that can be difficult to value.

As the Tax Foundation’s Nicole Kaeding and Kyle Pomerleau note, the very rich “own more than publicly-traded stock, such as real estate holdings, trusts, and business ownership interests. It is difficult to value these assets on an ongoing basis. Imagine a large privately-held company—its value could change almost daily. How would the tax handle these fluctuations?”

To handle the challenge, Warren has called for increasing the number of agents at the Internal Revenue Service—rarely a promising sign for a campaign proposal. In any case, inherently tricky valuations remain tricky no many how many bureaucrats you throw at the problem.

More likely, the rich would find ways to avoid those assessments entirely. Sweden’s wealth tax, for example, was frequently blamed for capital flight and a depressed rate of national entrepreneurship. Relative to other European nations, Swedes were less likely to own their own business, and those who did often took their money elsewhere rather than reinvest it at home. The founder of Ikea, for example, moved much of his wealth into offshore foundations that shielded the money from the tax.

I say it was blamed because a little more than a decade ago, Sweden eliminated its wealth tax. The move was easy to make, because the government lost essentially no revenue. As The Financial Times reported, the elimination of the tax had “virtually no effect of government finances.” So much for making the rich pay their share.

Nor is Sweden an outlier in its decision to nix a tax on wealth. European countries that have imposed wealth taxes have largely given up on them; of the dozen OECD nations that had wealth taxes in 1990, just four still have the tax on the books. Warren wants the U.S. to adopt an idea that has been tried and discarded.

Her proposal is unlikely make it through Congress and past the president’s desk. But even if it does, we might not ever find out what sort of revenue it would raise, because it would be quickly challenged in court as unconstitutional.

Aside from the income tax, which required a constitutional amendment before it could be implemented, the Constitution prohibits the federal government from levying “direct taxes”—taxes that aren’t spread out amongst the states according to population. Some proponents of the estate tax have argued that it could pass constitutional muster, but opinions are split, and there’s probably more reason than not to believe that it would be struck down. When estate taxes were challenged, for example, they were upheld as taxes on the transfer of wealth rather than on its existence. That wouldn’t be true in this case. Warren’s wealth tax would target fortunes simply for existing.

Which I suppose is the point. Taxes are typically imposed for one of two purposes: to raise revenue, or to discourage behavior that politicians dislike. In this case, what Warren doesn’t like is the fact that some people have amassed large personal fortunes, sometimes through inheritance, but often by starting or running successful businesses. She wants an America where that happens less often, or where, when it does happen, the wealth ends up elsewhere.

Warren’s proposed wealth tax is thus best understood not as a targeted revenue raiser, but as a symbolic declaration of opposition to the existence of outsized wealth, irrespective of how it was obtained. She has described it as a tool for addressing inequality, but really it is a presidential candidate’s way of saying, “I oppose the existence of very rich people.” She could have just said it.

Inflation To Get Much Worse! Courtesy of The “Inflation Reduction Act”