Moo Poo on Mars Eloon Musk today purchased several thousand head of Jersey dairy cattle, some yet to be born,… 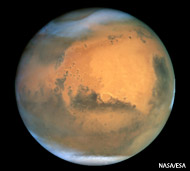 Eloon Musk today purchased several thousand head of Jersey dairy cattle, some yet to be born, with the promise to breed up to 6 million to send a constant stream of the bovines to the planet surface of Mars.

Each cow would be equipped with its own dehydrated food supply and space suit, enough for it to live 5 years on the red planet without needing outside feed. However, its excrement and urine would be allowed to hit the Red Planet's frozen surface.

"The current atmosphere does not have nearly the pressure that would be needed to support an earthlike atmosphere," explained Musk. "We must release enough methane gas on the surface at a fast enough rate for it to build up in the current weak atmosphere," he continued.

Scientists familiar with Mars chemistry and current ice and water make-up doubt that Musk's plan can work or be sustained, as, even with suits on, dairy cattle would not be able to survive the extreme temperatures and pressure.

"If you need methane," said one scientist, "just send the U.S. Congress; they would out-produce 6 million dairy cattle. Send Eloon too."