None of the contestants An Elvis Presley lookalike competition in the pretty East Yorkshire seaside town of Bridlington yesterday, drew… 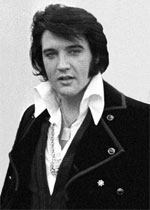 None of the contestants

An Elvis Presley lookalike competition in the pretty East Yorkshire seaside town of Bridlington yesterday, drew contestants from all over the world, none of whom looked like Elvis Presley.

The 'Welcome To Elvis 2018' event is being staged at Bridlington Spa, and is a great draw for tourists, who enjoy taking photographs of, and being photographed with, the 'Presleys' who do not even remotely resemble Elvis.

Not only did these 'Elvis impersonators' not look like Elvis, they did not sound like him either. Feeling like they were obliged to, at least, try sounding like Elvis, the bogus Presleys staged an impromptu singalong with bewildered daytrippers on the seafront promenade. They burst into 'Jailhouse Rock'. Clouds – not crowds – gathered. One member of the audience laughed:

"Who yer supposed to be doin – Shakin' Stevens?"

The watchers, about 8-strong, roared with laughter. The Presleys moved away to seek a new audience. Finding some elderly folks sitting on benches eating ice-creams around some rather lovely beds of yellow and white chrysanthemums, the Kings of Rock stopped and tried again. This time, they went 'low-key' for the oldies, and crooned 'Love Me Tender'.

"Get the fuck owdavit!" shouted a man, about 80, "Fuckin Teddy Boys! We don't want your sort round ere! Piss off to Southend, y'silly bastards!"

Shame-faced, the now-dwindling group of Presleys sloped off again. Rain started to fall. One of their number, wearing a Hawaiian shirt similar to the one his idol wore in 'Blue Hawaii', pulled his shirt over his head to protect his coiffeured quiff, as the gang made its way into Bridlington town center, looking rather bedraggled.

Seeing a group of buskers playing just inside the railway station, one of the Presleys asked if the musicians knew 'Blue Suede Shoes'. They did. It was on! As the Elvis look-not-likes hammered out the opening lines, and the musicians gave it their all, the show was finally on the road! Now they had their audience, their 5 minutes of fame! One woman, clearly impressed, said:

"I always liked a bit of that Roy Orbison!"