The Cabin Crew will collect your tray. Please make sure you do not steal anything There was 'tension around the… 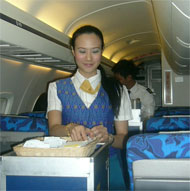 The Cabin Crew will collect your tray. Please make sure you do not steal anything

There was 'tension around the table' in one Battambang household on Monday evening, when it was revealed that an airline fork, part of a cherished collection of airline cutlery, had gone missing.

The fork – stolen from an EVA Air flight from Bangkok to London in around 1995 – was a metal, 4-pronged model, about 6 inches long, with the airline logo set stylishly in the handle. It was priceless.

More recently, the fork had been used by Delma, the 3-year-old daughter of its 'owner', Englishman Moys Kenwood, to feed herself her 'din-din'. Suspicion naturally, then, fell upon the tot.

Under oath, however, the adorable sweet thing swore that she knew nothing of the fork's mysterious disappearance, and stuck steadfastly to her story during her 2-hour interrogation.

Kenwood's one-year-old son, Norman, was also unable to shed any light on the matter, primarily because he can't talk yet. His movements are being closely monitored.

In light of the failure to thus far identify the culprit, the lady of the household, Mrs Kenwood, has now attracted the attentions of the investigator. It's thought she may have inadvertently thrown the fork into the rubbish bin along with leftovers from a meal, but has resolutely denied this.

Kenwood, though, has vowed to get to the bottom of the matter.

"I have vowed to get to the bottom of the matter", he said