Carroll County, GA — In September 2015, on a rainy Saturday night, Georgia state trooper Anthony Scott was flexing his above the law privilege and driving at dangerously high speeds for no reason. He was doing 91 mph in a 55 mph zone. Scott was not on his way to a call, nor did he have any official reason for driving fast. While travelling at such a high rate of speed, he slammed into a Nissan Sentra carrying four kids. Kylie Hope Lindsey, 17, and Isabella Alise Chinchilla, 16, who were in the back seat of the Nissan, were killed.

For four years, Kylie’s family has been fighting for justice for their daughter. However, thanks to a corrupt system, not only has this cop avoided any and all accountability, but he’s been rewarded in the form of two elected positions. As TFTP reported at the time, Scott was elected to city council only three months after killing young Kylie and Isabella. It was also reported that he can even return to law enforcement.

But that’s not all.

This week, as the city of Buchanan held their elections, Scott ran uncontested and after serving as a member of the city council, it now appears that this killer cop will be the mayor. Amazingly enough, the media coverage of who won mayor is completely non-existent.

The victim’s mother, Kellie Lindsey, sent us a photo of the receipts from the poll counter. It does appear that Scott will by the next mayor of Buchanan. 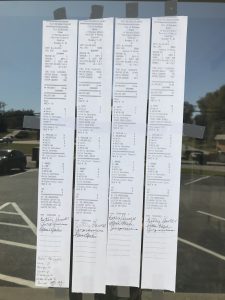 Imagine for a moment that the police officer responsible for killing your only daughter was not only never held responsible for his actions, but actually went on to become the mayor of your town. How would this make you feel? Sadly, this is a reality for Lindsey.

“It’s been an incredible heart ache,” Kellie Lindsey told TFTP this week. “Not only did we lose our only daughter, we’re having to fight tooth and nail to get this sociopath held accountable.”

Sociopath is not an unfounded term either.

Lindsey also shared with us the fact that just last November, Scott was arrested for Assault and Battery in the 3rd degree in Dillon County, South Carolina. There is no news coverage of it and the results of these charges are not clear.

One thing is certain, however, and that’s the fact that these charges did not hinder his ability to run for mayor and reportedly win in Georgia.

As TFTP reported at the time, Dillon Lewis Wall, 18, who was driving the Nissan, and front-seat passenger Benjamin Alan Finken, 17, were critically injured and taken to Grady Memorial Hospital after the crash.

Months after the crash and Dillon would still be recovering from a brain injury, paralysis, hearing loss and multiple broken teeth. However, according to Dillon, it’s his heart that was hurt the most as this young man was crazy about Kylie.

After the crash, Capt. Mark Perry of the Georgia Department of Public Safety released a statement noting that Scott had no reason to be travelling that fast.

“Turns out he was running at a high rate of speed through this intersection in a territory that’s he’s familiar with and should have known the dangers that potentially exist,” Perry said speaking about the 10 crashes that had occurred at this intersection over a three year period.

An internal ‘investigation’ said that Scott’s speed only ‘contributed to the crash,’ but that Dillon’s failure to yield was to blame. However, according to Dillon’s aunt, he could not see the trooper.

Dashcam video of the crash backs up Dillon’s claim of not being able to see Scott approaching. As Scott sped up the hill on that dark highway, Dillon had no way of seeing or reacting fast enough to the trooper’s car travelling at such a high speed.

After watching the dashcam footage, you can clearly see who was at fault in this scenario. However, Anthony Scott is a privileged member of the establishment, and, therefore, he is entitled to a privileged form of justice — literally.

As the Atlanta-Journal-Constitution reported at the time:

The former trooper went before a grand jury, which was investigating why he was driving 91 mph on a dark highway in Carroll County seconds before his car collided with that of the teenagers. Anthony Scott made use of a privilege that Georgia extends to law enforcement officers: the officer may choose to make a statement to a grand jury that is deciding whether to indict him for a crime. The statement comes at the end of the proceeding, and no one may challenge it or cross-examine the officer.

Scott took advantage of that privilege and was the concluding witness before the grand jury, District Attorney Pete Skandalakis said.

The grand jury chose not to indict Scott.

“There are no winners here,” Scott’s attorney, Max Pilgrim, said at the time. “This has been harder on him than anything he ever did in the Marine Corps.”

Scott’s attorney is wrong. There is a clear “winner” here, and it’s the man who is alive and who gets to go home to his family in spite of his criminal negligence. And, he literally won elected office, not once, but twice.

After a long battle for justice, Scott would eventually be charged with second-degree vehicular homicide, two counts of serious injury by vehicle, violating oath of office and one count each of speeding and reckless driving. However, during the trial, Scott’s attorney asked for a mistrial, citing new evidence. Judge Simpson granted the mistrial while the jury was deliberating, saying the defendant’s constitutional rights were violated because the prosecution withheld evidence of an “alternative theory’ that had already been discounted before trial.

“If it had been a regular citizen, and we were going 90 miles an hour in a 55, suggested 45, and we hit and killed twp teens, we would have already been handed our justice,” Tatum said.

In May, District Attorney Herb Cranford said he plans on getting the case back in front of a jury but this has yet to happen. The case is now tied up in the appellate courts and there’s still no new trial date. There is one positive detail to this tragic series of events, however, and in September, according to law.com, John Simpson, chief judge of the Superior Court of the Coweta Circuit, issued an order recusing himself from further involvement in the case against former Georgia state trooper Anthony “A.J.” Scott and asking that it be reassigned to another judge.

Hopefully, one of these days sooner than later, these grieving families will see justice. If you’d like to follow the families’ fight for justice, you can do so on their Facebook Page, here.

WATCH: Cop Suspended for Choking Child, Lifting Him Off the Ground BY HIS NECK

Who Owns The Fed? Are They To Blame For 40 Million Unemployed?

Illinois Is on the Verge of Legalizing Marijuana. Here Is What the Bill Would Do.