Spread the love San Jacinto, CA — Since the passage of Proposition 64, residents of the state of California are…

San Jacinto, CA — Since the passage of Proposition 64, residents of the state of California are now legally allowed to grow marijuana. As long as the person growing the marijuana is 21 years of age or older, they are allowed to cultivate no more than 6 plants on their property. Sam Davis and his wife both knew the law and were following it to the letter. However, cops are still addicted to kicking in doors and devastating people’s lives over a plant and because of this, Sam Davis and his family are fighting an uphill battle.

Last year, on October 17th, Davis was at his Riverside County home with his family when multiple cops shows up to arrest him for his entirely legal marijuana plants growing in his backyard. When Davis attempted to assert his rights and ask for a warrant, all hell would break loose — much of it captured on video.

Davis explained to the Free Thought Project that Detective Wade Grier with the San Jacinto Sheriff’s department refused to show the warrant. When Davis and his wife pulled out their phones to record the home invasion, the cops got violent.

“When I asked for a warrant they would not present it so I started recording them and they beat up me and my wife because they did not like us recording them,” said Davis.

Showing the unnecessary nature of the raid, police did not arrest Davis and his wife for growing weed and appeared to have scrambled to make up charges on the fly.

Police claimed that Davis and his wife were “endangering” the children by growing their legal marijuana plants in the back yard — which is not a crime.

“The crazy part is we were only charged with child endangerment because they said that there was weed around the kids but the only weed laying around the house was the weed that they threw all over during the search,” Davis said.

Nevertheless, despite their innocence, the child endangerment charges were used to kidnap their children and Davis and his wife were thrown in a cage. Davis said they had to deplete all their savings of $ 28,000 to fight the charges and get their kids back.

“They knew that they could not get us on the cannabis charge and they were mad that we were recording so they used the child endangerment charge just to take our kids away from us and take us to jail out of spite,” Davis tells TFTP.

It took them 78 days to get their children back from the state and they are still fighting the charges.

Davis explained to TFTP that the warrant used to raid his house was expired. “In California they only have 10 days to execute a search warrant once it is issued but they raided us on October 17th and the warrant was issued on September 17th,” he said. 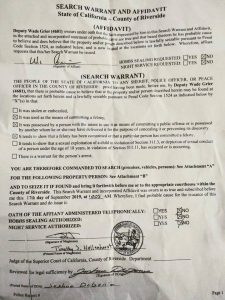 What’s more, Davis and his wife are still fighting the charges and they are facing 6 months in jail each. In an email, Davis told TFTP that he has since fled to Mexico where they are seeking refugee status as they believe they are innocent and being wrongly charged.

“The kids are completely devastated and constantly in fear every time there is a knock at the door or we have to go to the CPS office for something,” Davis said of how this raid has taken a toll on his family.

For growing a plant in a state where it is legal to grow this plant, an innocent family has been torn apart by people claiming to keep them safe. Now, they are forced to flee the country so they don’t suffer further. It is a tragedy that takes place across the land of the free on a daily basis.

While this case is certainly extreme, Davis was lucky to get his children back from the state. Other families have not been so fortunate. Many times the children are taken from caring parents and thrown into torturous and outright sadistic situations where they end up raped, tortured, and even murdered.

As TFTP reported, Alexandria Hill, a 2-year-old little girl, was taken from her father because he used marijuana to treat his seizures. The state removed Alexandria from a home with loving parents over marijuana and put her in a home with an abusive woman, Sherill Small, and her crack addict husband who ran a racket keeping foster children. Six months later, this couple would beat the toddler to death.

WATCH: Drop the Complaint or Be Arrested, CTA Supervisor Arrested for Reporting Cop for Assault