Spread the love      Tweet    Los Angeles County, CA – A man is speaking out after he claims he… 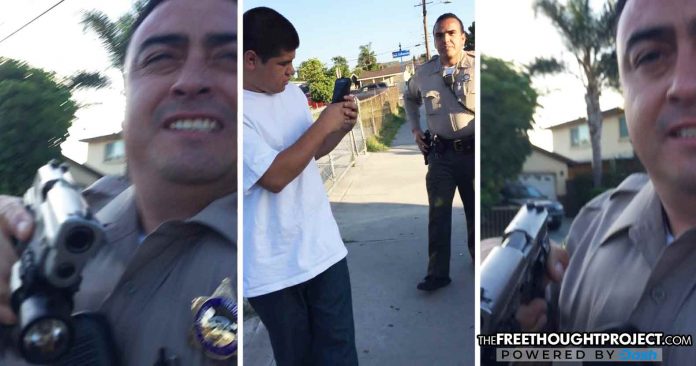 Los Angeles County, CA – A man is speaking out after he claims he and his friend Alex Borja were walking down a residential street and filming their walk when they were harassed, threatened with guns, assaulted and detained by police with no explanation, and they have the video to prove it.

Hi guys please help and share this video. yesterday I was walking down the Street with my friend and we got pulled over by officer cruz and officer Ramos they have no reason why to pull us over and to make it worse he had the nerve to put the gun in my head and put his hands on my neck and turned me around & hit me in my ribs I honestly can’t believe it just for walking on the street I used to worry about getting shot in the street by someone else and now I have to worry about the cops killing me. Please people hop out and share this video try to make this shit go viral by the way not looking for fame just looking for justice

From their recording of the incident, the two can be seen walking down the sidewalk when they were confronted by police. Cruz immediately identified the two officers, who he was openly filming, as “Officer Cruz and Ramos.” Cruz’ has said he’s gotten a lot of flack because he’s apparently known by police. The truth is Cruz says everyone in the neighborhood knows their names because they “want to be known as the ones that can’t be touched, the badass ones.”

He told TFTP in an exclusive interview the pair of police officers have been harassing him for the last five years. When asked how many times he’s been stopped and frisked by Ramos he said, “Oooh, I’ve lost count.” Each time, “He lets me go and I keep telling him you’re wasting your time man, go get the criminals down the street.”

Citizens are under no obligation to speak with police, even after they have been detained and questioned. Cruz asked the officers why they were being questioned, but neither officer answered. Feeling free to continue to move about his neighborhood, Cruz attempted to cross the street. That is when an officer, who was hiding behind a van, popped out, gun drawn, and took Cruz to the ground.

Cruz told The Free Thought Project that neither he or his friend were charged with any crime. They were handcuffed and placed into the back of the squad car while their probation status was checked. Having not committed a crime, not being suspected of any crime, not having any warrants, and being completely innocent, the two were then released.

This police contact is disturbing on many levels. First, it is clear that the two young men have already had run-ins with the officers who they already know by name. To protect their rights, Cruz was recording. Recording in public and refusing to speak with police officers is not a crime. In fact, citizens should be encouraged to record all interactions with police and they should refrain from speaking to them—both are constitutionally protected forms of free speech and prevention from incriminating oneself.

The most disturbing part of this incident occurred when officer Ramos pulled his gun and pointed it at Cruz’ head! If a citizen had done such an action, that person would be arrested and jailed for “brandishing a weapon” and “assault with a deadly weapon,” both of which are felonies. But regularly, under the presumption of “officer safety” police comport themselves like bandits, rolling up on people, pulling their guns, kidnapping them, and if they so choose, putting them in cages for nothing more than recording in public.

As The Free Thought Project has reported, citizens who record police regularly have guns drawn on them. One twitch of the finger and a person could ostensibly be killed for documenting the work of police and holding them accountable for their actions. A recent example of this occurred earlier this month—also in California—when a citizen journalist and the reported son of a former police chief, had a gun pointed at him as he was recording an officer with a GoPro. The encounter made national headlines, highlighting the experiences of people who record in public.

Fortunately, the two young men were not killed, and were free to resume their First Amendment rights to film police in public. However, now, the two could and probably should sue the police department and the city for having their rights violated. Cruz told TFTP Ramos has pulled his gun on him somewhere between five and ten times but he’s only caught it on video twice. Ramos once took him to the police station all because he had “fuck the cops” written on his hand in magic marker. He also said Ramos has gotten so angry with him that he once threatened to kill him and place a gun on his dead body. “It’s not the first time he’s done this type of thing and it’s not going to be the last. He’s done the same thing to my friends.”

If Cruz does sue, he’ll probably win and the American taxpayer will have to pick up the tab if a court rules the officers had no right to stop, question, threaten with a gun, handcuff and detain the two men. Cruz says he’s interested in speaking with any lawyer in the Artesia area who can put an end to the police harassment he and his friends are currently experiencing. He believes he has a strong federal civil rights lawsuit, but admits he would rather have Ramos transferred to another area to patrol so he will simply leave him alone.

One Year Later, No One Has Been Punished for the IRS Leak of Billionaires’ Tax Data

Why a Wealth Tax Is a Bad Idea