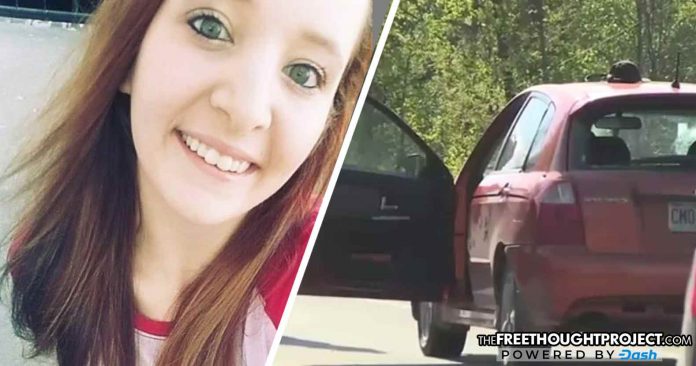 Aurora, MO – Initial reports claimed that a young mother was shot and killed after she attempted to run over a police officer, but her family is now speaking out and claiming that she was actually attempting to help police, and was tragically killed in an operation gone wrong.

Savannah Hill, 21, was killed last month after it was reported that she was driving a vehicle that struck an officer during a traffic stop, while police were attempting to arrest Mason Farris, 19, who was in the car with her.

Farris was dating Hill’s friend, Nicole Helling, and now friends and family are claiming that the two women were caught between a rock and a hard place when they were confronted by officers who were chasing Farris and threatened with arrest if they did not attempt to help police nab Farris and other known drug dealers.

The two knew Farris would flee if police attempted to arrest him so they crafted a plan to help police take him into custody. At a local gas station, Hill called 911 and told dispatch she would help police arrest Farris. She said she would get him into the back seat of her car, where the child safety locks would prevent him from getting out of the car and fleeing on foot. But she insisted the police wait and pull them over after they exited the gas station and got onto the road.

Two Aurora Police officers were notified of the plan and promptly pulled over the vehicle Hill was driving. When they did, as expected, Farris attempted to get out of the car but couldn’t because of the child safety locks. Panicked, he jumped into the front seat and pressed down on Hill’s knee. The car lunged backwards, striking Aurora Officer Chris Kozisek, and knocking him to the ground with such force that the car was dented and the rear glass shattered.

The other officer on the scene, David Chatman, opened fire on the vehicle and shot and killed Hill. Farris jumped out and ran, but was later apprehended. Now Farris has been charged with Hill’s murder.

The Missouri State Highway Patrol conducted an investigation and Officer Chatman was cleared of all wrongdoing—but questions remain. Did Chapman have to fire on the person who was, in good faith, attempting to help the two officers? Hill’s father thinks something is not adding up.

In an exclusive interview with The Free Thought Project, Savanna Hill’s father, Chris Nethery, said that he and his family are devastated and he blames the Aurora Police Department for the tragic death of his daughter. “It seems to us that it is an execution of a confidential informant,” he said, explaining just how tense the relationship was between Aurora PD and his daughter.

Nethery said that Hill previously had a run-in with Kozisek, where he put her in handcuffs and then threatened to arrest her for possession of cannabis if she did not comply. Nethery said Hill had been working with police as an undercover informant, for quite some time afterward, and helped take down several high-profile drug dealers.

“It’s a small town of 5,000 people,” Nethery said, noting that when word got out on the street that she was helping police, one drug dealer put a “$ 2,000 hit on her head.” People who wanted to claim the money were “chasing her at 90 mph” around town trying to kill her.

Nethery told TFTP that the message communicated to her by police was, “If she did not help them, they were going to take her kids tonight. And that was the night she showed police where the dealer was who put the hit out on her.”

Nethery, who is now a truck driver, worked for four years prior as an Aurora 911 police dispatcher. He said he knows the officers were reckless in the way they handled his daughter and claimed that “She couldn’t go to Aurora without getting pulled over. They were harassing her.”

The father said he was about to go and confront the police department but his daughter was killed by her handlers before he got a chance. He is now planning to sue the department and the officers involved in a wrongful death lawsuit. “There were so many things that were done wrong on this,” Nethery concluded.

The angry father, who said he does not want to see himself as “anti-police” cannot get some questions out of his mind. Hill was the only person hit but bullets that night, and only one bullet of the 10-12 reportedly fired by Chatman struck Hill. The one bullet wound she sustained was through the side of her head.

Nethery said it appears as though she was killed “execution style.” Officer Kozisek, whose partner killed Hill, was not as badly injured as reports appear to indicate he was. After Kozisek was struck by Hill’s car, he was seen by friends of the family who said he was “walking around and laughing.” The officer also attempted to walk into Hill’s hospital room later that night but was prevented from doing so by Missouri State Highway Patrol who had taken over the investigation. So he was reportedly seen walking around at the scene and later that night. “We believe it was a set-up,” stated Michelle Nethery, Hill’s mother.

The officer who killed their daughter, has his own troubled past. Chatman is known in police accountability circles as a “Gypsy Cop,” one who cannot keep a job as an officer, often for very disturbing reasons. According to a report from the Springfield News-Leader, “Chatman once falsified a report to cover up alleged police brutality, worked at five different law enforcement agencies over four years and left at least two recent jobs on bad terms.”

If you would like to share your opinion on the Aurora Police Department’s lenient treatment of officers Chris Kozisek and David Chatman, call 417-678-5025, or visit the Lawrence County Sheriff’s Department’s Facebook page.