Here’s what happened in Denver on Saturday: Lee Keltner, a right-wing demonstrator, was shot and killed after he assaulted Matthew…

Here’s what happened in Denver on Saturday: Lee Keltner, a right-wing demonstrator, was shot and killed after he assaulted Matthew Dolloff, a reporter’s bodyguard, who retaliated for a blow to the head and a spray of mace by firing a single gunshot from point-blank range.

The skirmish, which escalated to deadly violence in less than 10 seconds, unfolded in broad daylight, directly in front of witnesses outside the Denver Art Museum. One was a conservative demonstrator who caught the sound of the gunshot and the sight of the victim collapsing to the ground in distressing video. A second was a livestreamer who rushed to the scene with the police, capturing the gunman’s arrest. A third was a staff photographer for The Denver Post, whose startling, close-up images of the whole incident were online by the end of the day. 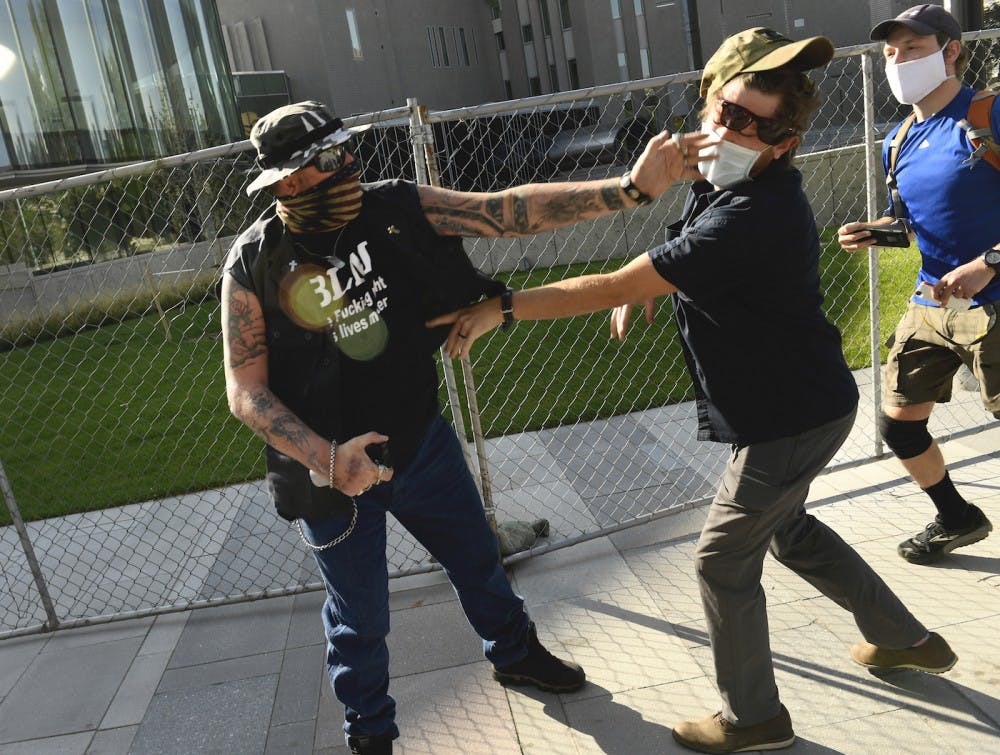 On Saturday in Denver, Lee Keltner, a right-wing demonstrator, approached Matthew Dolloff, a bodyguard for a local news station, and struck him in the face. Moments later, Keltner sprayed mace at Dolloff, who responded with deadly gunfire.

But far-right Twitter personalities, who thrive by providing their followers with fresh reasons to be outraged around the clock, do not wait all day to leap to conclusions about unfolding events. Within minutes of the shooting — which took place after a sparsely attended rally described as a “patriot muster” against “BLM, Antifa, and related Marxist associations” by the organizer, a former military contractor who survived the Benghazi attack — influential conservatives with hundreds of thousands of followers began to speculate that the gunman must have been an antifascist activist.

Just over an hour later, those same trolls flooded social networks with misinformation, amplifying a mistaken report from the Denver Post that the gunman was “a left-wing demonstrator.” That report, which was corrected later in the day, was apparently based on the account of Helen Richardson, the newspaper photographer who watched the shooting unfold through her viewfinder and had no idea that Dolloff was, in fact, a bodyguard for the reporter standing behind him.

Before the Post corrected its report, popular far-right Twitter commentators with a combined audience in the millions treated it as all the proof they needed to inform their readers that the killing was the work of an antifascist activist.

The viral spread of those false claims apparently alarmed the Denver Police Department, which had taken Dolloff in custody along with the journalist he was guarding and quickly determined that they were not left-wing protesters. Less than four hours after the shooting, the department tried to stem the tide of misinformation by tweeting an update on its investigation, in which it reported that detectives had determined that “the suspect is a private security guard with no affiliation with Antifa.”

Even after the Denver police statement, one of the trolls, Ian Miles Cheong, a Malaysian blogger with a big following among American conservatives, continued to pretend that antifascists were behind the shooting of Keltner by sarcastically invoking former Vice President Joe Biden’s description of antifa as an idea rather than a group in a caption for a video of the dead man at work in 2012.

On Sunday, a leader of the pro-Trump youth movement Turning Point, Charlie Kirk, continued to make the false claim. “A conservative was just gunned down in the streets by ANTIFA and not a single ‘mainstream’ news outlet has asked Joe Biden to condemn the organization he called ‘just an idea,’” Kirk tweeted to his 1.8 million followers. “We don’t have a media in this country anymore,” Kirk added. “We have activists posing as journalists.”

What is remarkable about Kirk’s comment is the lack of awareness of how ironic it is, given that so many right-wing activists posing as journalists on Twitter have refused to retract their false claims that Dolloff was an antifascist gunman. The Denver Post, by contrast, corrected and explained the error in its report as soon as it was contradicted by the police investigation.

Rather than retract their own false reports, however, several of the most influential Twitter conservatives, joined by 4chan trolls, began scouring the web for evidence that Dolloff was somehow secretly an antifa assassin. Failing to find any such thing, they then moved the goalposts quite a distance by treating scraps of evidence, gleaned from Twitter and Facebook accounts that appeared to be his, of his past support for Sen. Bernie Sanders and the Occupy Denver movement as a good enough substitute. None remarked on the fact that Dolloff also praised the “insight” into politics of conservative commentator Charles Krauthammer.

Lauren Boebert, a far-right Republican candidate for Congress and QAnon fan, also ignored the police statement and tweeted on Sunday that the fatal shooting in Denver was an example of “the violence perpetrated in the streets by ANTIFA, BLM & other radical leftist groups.”

In fact, the visual evidence makes it clear that Keltner initiated the violence that led to his death, perhaps because he also mistook Dolloff and the journalist he was guarding for counter-demonstrators.

Taken together the video and photographs of the incident show that Keltner first got into a heated confrontation with a counter-demonstrator in a “Black Guns Matter” shirt as he left the rally. After another conservative separated the two men, Keltner, a 49-year-old Navy veteran who made cowboy hats, appeared to take exception to two other men who were observing the argument at close range: the reporter for Denver’s NBC affiliate, 9 News, and Dolloff, the bodyguard provided to the station by Pinkerton security.

What led Keltner to strike Dolloff in the head, knocking off his cap, remains unknown, but Helen Richardson, the photojournalist, wrote on Instagram early Sunday morning that “the two exchanged heated words, the patriot hit the man in the face, then backed up to spray what looked like pepper spray at him. Literally in that split second the man who had gotten hit by the patriot pulled out a gun from his waistband and shot the patriot.”

“It isn’t clear who fired first,” Richardson added. However, the sound of the spray being released can be heard a split second before the gunshot rings out, and Keltner collapses to the pavement, in the final seconds of video posted on Twitter by another witness, a conservative who had just left the “patriot muster” in nearby Civic Center Park, which was jeered at by antifascist protesters from across the park.

Elijah Schaffer, a freelance producer for Glenn Beck’s Blaze TV and a pro-Trump political activist, also ignored the Denver police statement when he posted video of the man in the “Black Guns Matter” shirt, who had initiated the conflict with Keltner, celebrating his death immediately after the incident. Schaffer falsely described the man as “an Antifa protester.”

DENVER: “It was a white supremist, right in the dome…f*ck yeah”

These people are evil. They want blood. And you better be ready #antifamurders
pic.twitter.com/ixhDewMdvZ

Video shot by another reporter for 9 News, Marc Sallinger, appeared to show that same man, who provoked the initial argument with Keltner but was not involved in the shooting, being arrested a short time later.

Following news reports on Sunday that Dolloff might have been operating as a security contractor without a license, conservative trolling moved on to accusing the news station, an NBC affiliate, of irresponsibly hiring an armed guard without proper screening. However, Dolloff was apparently working for a subcontractor of Pinkerton, a long-established security firm.

Dolloff, who is being held without bond on suspicion of murder, made a virtual court appearance on Sunday, during which he reportedly strained to hear the judge.

Defendant Matthew Dolloff appears in virtual court this morning. He is accused in the Denver shooting and reportedly was acting as a private security guard for 9News. pic.twitter.com/2rJTCa0PyR

From the Old City to Tel Rumeida Hill: Israel’s Takeover of Hebron Forges Ahead

As Medical Aid Dwindles, Some Syrian Refugees May Be “Too Expensive” to Keep Alive

Lee Camp: How the Media Used the Bounty Scandal to Stop the ‘Threat’ of Peace in Afghanistan