Not quite, but not far off There was hysterical laughter aplenty at one school in Battambang this morning, when a… 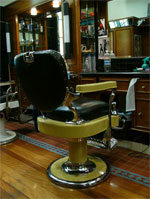 Not quite, but not far off

There was hysterical laughter aplenty at one school in Battambang this morning, when a student sat down rather too heavily on a computer chair, whereupon it disintegrated underneath him.

The boy, aged 6, and weighing around 150lbs, was waiting to be picked up from the school by his dad, when he spied the empty chair and decided to 'take the weight of his pins'.

The chair winced; his legs looked nothing like pins.

Instead of just sitting down, the boy gave his knees a bend, and performed a little 'backwards jump' as he sat. The chair, a sturdy-enough-looking-model, was no match for Billy Bunter – it made a sound like a TV set being thrown from a tower block – and collapsed into smithereens. A receptionist screamed, the fat boy giggled, and a teacher standing nearby smirked, as you knew he would.

The chair was unrecognizable as ever having been a chair, as the fat student struggled to his feet, and wiped various bits of plastic from his person. Then he ate a pack of chips and a chocolate bar.

Nobody, apart from the chair, was hurt in the incident, and elsewhere in the school, lessons continued as normal.