Spread the love      Tweet    Miami, FL — On Thursday, a federal judge made a bombshell ruling which stated… 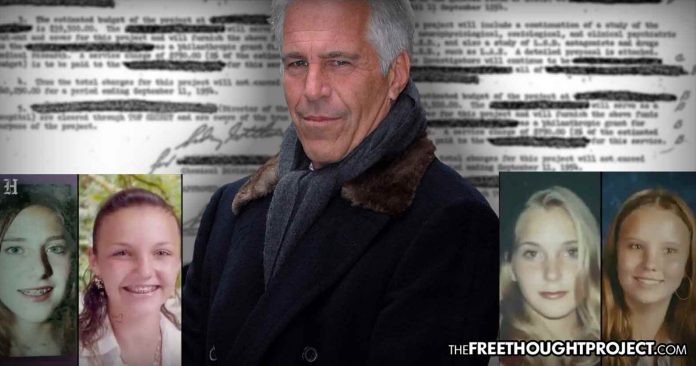 Miami, FL — On Thursday, a federal judge made a bombshell ruling which stated that the prosecutors who worked under former Miami U.S. Attorney Alex Acosta—now Trump’s Labor Secretary—broke the law when handling the case of billionaire pedophile Jeffrey Epstein.

According to the ruling, the prosecutors acted illegally when they concealed a plea agreement from more than 30 underage victims who had been sexually abused by the New York hedge fund manager.

“The government aligned themselves with Epstein, working against his victims, for 11 years,’’ Brad Edwards, who represents Courtney Wild — Jane Doe No. 1 in the case — said. “Yes, this is a huge victory, but to make his victims suffer for 11 years, this should not have happened. Instead of admitting what they did, and doing the right thing, they spent 11 years fighting these girls.’’

This ruling is certainly a victory for Epstein’s victims, however, as the Miami Herald reported late Thursday, the federal judge, Kenneth A. Marra, stopped short of overturning Epstein’s plea deal, or issuing an order resolving the case.

Marra, in a 33-page opinion, said prosecutors not only violated the Crime Victims’ Rights Act by not informing the victims, they also misled the girls into believing that the FBI’s sex trafficking case against Epstein was still ongoing — when in fact, prosecutors had secretly closed it after sealing the plea bargain from the public record.

Instead of overturning the plea deal, the judge gave federal prosecutors 15 days to seek a settlement between Epstein’s victims and their attorneys. However, the victims were not seeking any type of monetary damages as part of the suit and merely wanted some light shined into the darkness.

When the follow up lawsuit was scheduled to begin in December—which implicated a member of the British Royal Family—it was over before it started as the billionaire effectively hushed everyone by throwing an untold sum of money at them.

This new ruling, however, paves the way for a new case as it exposes crimes of federal prosecutors.

“As a legal matter, the non-prosecution agreement entered into by the U.S. Attorney’s Office in the Southern District of Florida does not bind other U.S. Attorneys in other districts. They are free, if they conclude it is appropriate to do so, to bring criminal actions against Mr. Epstein and his co-conspirators,’’ said lawyer David Boies, representing two of Epstein’s victims who claim they were trafficked by Epstein in New York and other areas of the country.

According to the Herald, it’s not clear whether the victims, now in their late 20s and early 30s, can, as part of the settlement, demand that the government prosecute Epstein. But others are calling on the Justice Department to take a new look at the case in the wake of the judge’s ruling.

As TFTP has reported, Epstein is a convicted child molester and sexually abused no less than 40 underage girls. Despite this fact, Acosta protected him while serving as a U.S. Attorney in Florida.

Instead of going to prison for life, as he should’ve considering the evidence against him, Epstein only got 13 months and was allowed to stay in the Palm Beach County Jail in his own private cell where he was allowed to leave the prison six days a week for “work release”. Epstein was forced to register as a sex offender for life, but with his money and his connections he doesn’t seem too bothered. He currently resides on his private island in the Virgin Islands.

The plea deal given to Epstein was already swarming in controversy before this ruling.

As TFTP reported in May, the FBI released nearly 300 pages of documents in eight parts. Although the majority of the content was made up of clippings from newspaper articles about Epstein, lists of the pages that had been deleted, and large blank spaces where information was being redacted, there was one document that stood out. Page 21 of Part 6 stated:

As the report in the Herald notes:

The eccentric hedge fund manager, whose friends included former President Bill Clinton, Donald Trump and Prince Andrew, was also suspected of trafficking minor girls, often from overseas, for sex parties at his other homes in Manhattan, New Mexico and the Caribbean, FBI and court records show.

Facing a 53-page federal indictment, Epstein could have ended up in federal prison for the rest of his life.

But on the morning of the breakfast meeting, a deal was struck — an extraordinary plea agreement that would conceal the full extent of Epstein’s crimes and the number of people involved.

Not only would Epstein serve just 13 months in the county jail, but the deal — called a non-prosecution agreement — essentially shut down an ongoing FBI probe into whether there were more victims and other powerful people who took part in Epstein’s sex crimes, according to a Miami Herald examination of thousands of emails, court documents and FBI records.

The pact required Epstein to plead guilty to two prostitution charges in state court. Epstein and four of his accomplices named in the agreement received immunity from all federal criminal charges. But even more unusual, the deal included wording that granted immunity to “any potential co-conspirators’’ who were also involved in Epstein’s crimes. These accomplices or participants were not identified in the agreement, leaving it open to interpretation whether it possibly referred to other influential people who were having sex with underage girls at Epstein’s various homes or on his plane.

These are undisputed facts — yet Trump still appointed Acosta.

During his appointment hearing in 2017, Acosta even defended the way he handled the Epstein case.

Let’s see how he defends this deal now, knowing that a federal judge just ruled his prosecutors all broke the law. Perhaps these victims may see justice after all.

Better Late Than Never: Bolton Ruined A Lot For Trump (And Peace)

Democrats Are In A Bind … Impeachment Hysteria A Huge Distraction

Has D.C. Found the Right Way To Do ‘Free’ Public Transit?