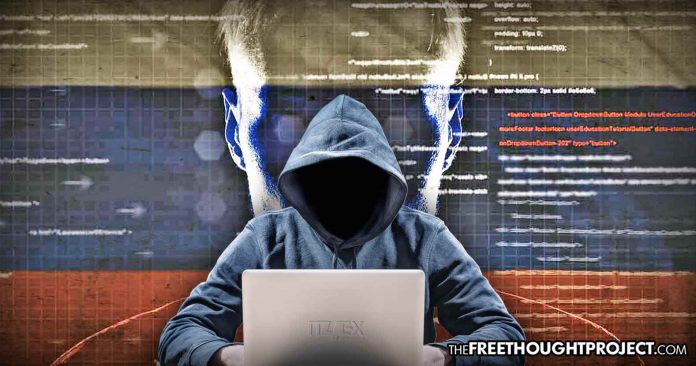 (RT) — The co-founders of cybersecurity firm New Knowledge warned Americans in November to “remain vigilant” in the face of “Russian efforts” to meddle in US elections. This month, they have been exposed for doing just that themselves.

Ryan Fox and Jonathan Morgan, who run the New Knowledge cybersecurity company which claims to “monitor disinformation” online, penned a foreboding op-ed in the New York Times on November 6, about “the Russians” and their nefarious efforts to influence American elections.

At the time, it struck me that Fox and Morgan’s reasoning seemed a little far-fetched. For example, one of the pieces of evidence presented to prove that Russia had targeted American elections was that lots of people had posted links to RT’s content online. Hardly a smoking gun worthy of a Times oped.

Morgan and Fox, intrepid cyber sleuths that they are, claimed in the article they had detected more “overall activity” from ongoing Russian influence campaigns than social media companies like Facebook and Twitter had yet revealed — or that other researchers had been able to identify.

The New Knowledge guys even authored a Senate Intelligence Committee report on Russia’s alleged efforts to mess with American democracy. They called it a “propaganda war against American citizens.” Impressive stuff. They must be really good at their job, right?

This week, however, we learned that New Knowledge was running its own disinformation campaign (or “propaganda war against Americans,” you could say), complete with fake Russian bots designed to discredit Republican candidate Roy Moore as a Russia-preferred candidate when he was running for the US senate in Alabama in 2017.

The scheme was exposed by the New York Times — the paper that just over a month earlier published that aforementioned oped, in which Fox and Morgan pontificated about Russian interference online.

New Knowledge created a mini-army of fake Russian bots and fake Facebook groups. The accounts, which had Russian names, were made to follow Moore. An internal company memo boasted that New Knowledge had “orchestrated an elaborate ‘false flag’ operation that planted the idea that the Moore campaign was amplified on social media by a Russian botnet.”

Moore lost the race by 1.5 percent. To be fair, accusations published by the Washington Post that he pursued underage girls back in the 1980s may have had something to do with it as well, but that’s a different story.

Of course, New Knowledge and even the New York Times, which blew the lid of the operation, are trying to spin this as some kind of “small experiment” during which they “imitated Russian tactics” online to see how they worked. Just for research, of course. They have also both claimed that the scheme, dubbed ‘Project Birmingham’ had almost no effect on the outcome of the race.

The money for the so-called research project came from Reid Hoffman, the billionaire co-founder of LinkedIn, who contributed $ 750,000 to American Engagement Technologies (AET), which then spent $ 100,000 on the New Knowledge experiment. After the scheme was exposed, Hoffman offered a public apology, saying he didn’t know exactly how the money had been used and admitting that the tactics were “highly disturbing.”

If people like Fox and Morgan actually cared about so-called Russian meddling or the integrity of American elections, they would not have run the deceptive campaign against Moore, no matter how undesirable he was as a candidate. Their sneaky and deceitful methods are in total contrast to the public profile they have cultivated for themselves as a firm fighting the good fight for the public good. But is it really that much of a surprise?

You would think that a newspaper like the New York Times would have cottoned on to the fact that guys like Fox and Morgan, with their histories in the US military and intelligence agencies, have clear agendas and are not exactly squeaky clean or the most credible sources of information when it comes to anything to do with Russia. But that kind of insight or circumspection might be too much to ask for in the age of Russiagate.

Facebook removed Morgan’s account on Saturday for “engaging in coordinated inauthentic behavior” around the Alabama election. Three days after publishing its initial article on the scandal (the one in which it played down the effects of New Knowledge’s disinfo campaign), the New York Times published a follow-up piece about the Facebook removal, in which it admitted that the controversy would be a “stinging embarrassment” for the social media researcher, noting that he had been a “leading voice” against supposed Russian disinformation campaigns.

In Fox and Morgan’s original NYT oped, they warned of the ubiquitous “Russia-linked social media accounts” and estimated that “at least hundreds of thousands, and perhaps even millions” of US citizens had engaged with them online. One must now wonder, were they including their own fake Russian bots in that count, or were they leaving those ones out?

It’s nearly two years into the Trump presidency and still we have no solid evidence that the Russian “collusion” theory is anything more than a fantasy concocted by Democrats desperate to provide a more palatable reason for Hillary Clinton’s loss than the fact that she simply ran a bad campaign.

In fact, at this point, we actually have more solid and irrefutable evidence of election meddling from the likes of dodgy American and British companies like Cambridge Analytica and New Knowledge than we do of any meddling orchestrated by Russia.