Top Story Spine deformities, such as idiopathic scoliosis and kyphosis (also known as “hunchback”), are characterized by an abnormal curvature… 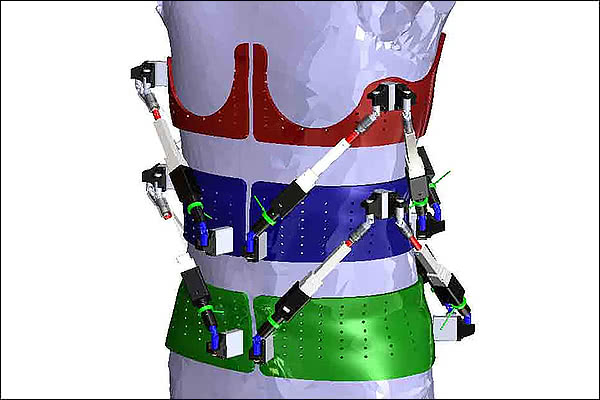 Spine deformities, such as idiopathic scoliosis and kyphosis (also known as “hunchback”), are characterized by an abnormal curvature in the spine. The children with these spinal deformities are typically advised to wear a brace that fits around the torso and hips to correct the abnormal curve. Bracing has been shown to prevent progression of the abnormal curve and avoid surgery. The underlying technology for bracing has not fundamentally changed in the last 50 years. While bracing can retard the progression of abnormal spine curves in adolescents, current braces impose a number of limitations due to their rigid, static and sensor-less designs. In addition, users find them uncomfortable to wear and can suffer from skin breakdown caused by prolonged, excessive force. Moreover, the inability to control the correction provided by the brace makes it difficult for users to adapt to changes in the torso over the course of treatment, resulting in diminished effectiveness. To address these deficiencies, Columbia Engineering researchers have invented a new Robotic Spine Exoskeleton (RoSE) that may solve most of these limitations and lead to new treatments for spine deformities. The RoSE is a dynamic spine brace that enabled the team to conduct the first study that looks at in vivo measurements of torso stiffness and characterizes the 3-D stiffness of the human torso.

2019 Preview: DNA testing will lead to a decline in genetic disorders

How can India clean up when all of its waste has an afterlife?

Acid bath: The new threat to lakes and rivers

Sperm whales are tracking fishing boats and stealing their fish

How to keep the lights on without burning the planet

Quiz of the year: Test your knowledge of 2018’s science stories