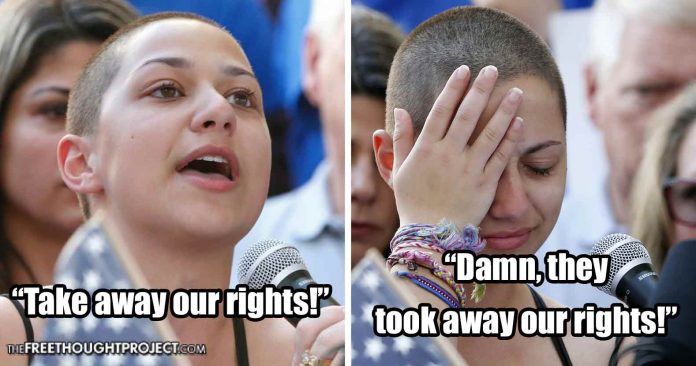 Parkland, FL — After the tragic shooting in Parkland, Florida last month, a group of anti-gun high school children became the darlings of the anti-gun movement. They were given widespread coverage and platforms on all mainstream media networks to call for the disarming of Americans. They were sanctioned by the government to do so—and now they are getting what they asked for—less rights.

In the Land of the Free, marching for change used to mean that you were standing up to the government to demand more or equal rights. Fast forward to 2018, however, and it is the exact opposite.

The mainstream media and the government tells us that these students are brave for walking out of class and demanding change—but how is it brave to be used as a tool of the state?

Activism involves challenging the establishment and what these kids were tricked into doing is not activism.

Earlier this month, millions of students across the country were encouraged by the government, mainstream media, and even their own school systems to walk out of class and demand the government take away their rights. It was, by no means, a challenge of authority and, in fact, it was a celebration of it.

The message was simple: we want this government to take our rights away.

Young Americans across the country marched to demand less freedom from their rulers and the mainstream media, celebrities, and politicians alike shoved this down our throats as some grassroots heroic political activism. However, it was the opposite, and now even the cheerleaders of this movement, David Hogg, Emma González, et. al., are beginning to realize what happens when you beg the state to take away your rights. They take away your rights.

On Friday, the Broward County School system announced its plan to violate the students’ right to privacy be implementing a clear backpack policy.

“Clear backpacks are the only backpacks that will be permitted on campus,” said Broward County School Superintendent Robert Runcie said in a letter sent to parents.

Now, all students will have to allow anyone at anytime to view the contents of their backpacks as well as wear IDs so they can be properly identified by school authorities. 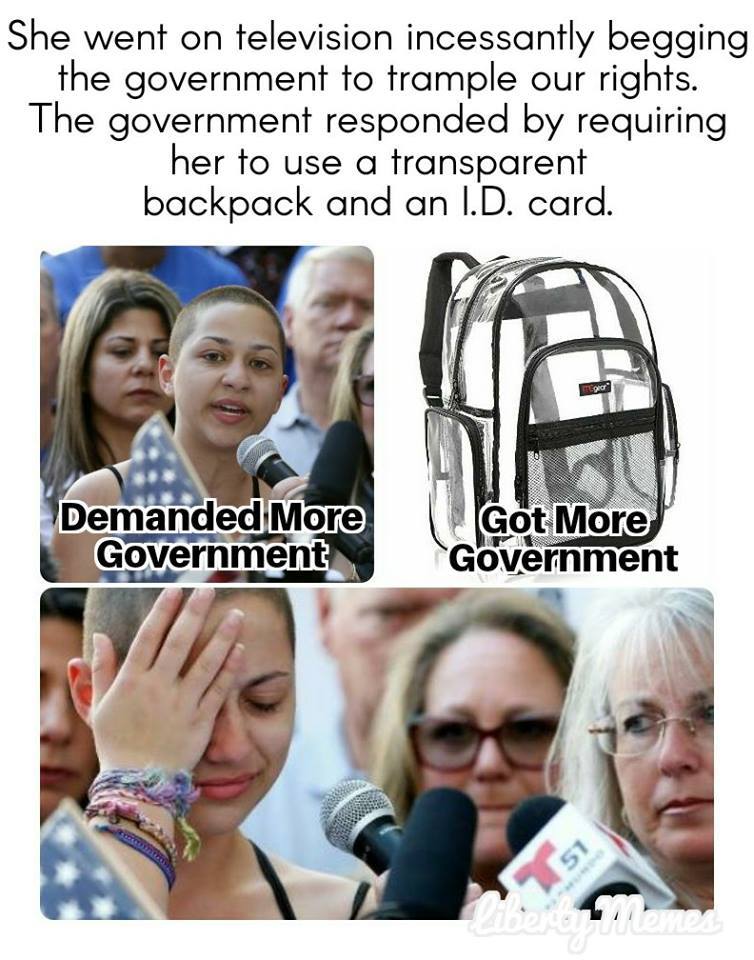 These new measures now have the darling activists on the defensive.

“I’m not happy with it. Why are you punishing me for one person’s actions?” Tyra Hemans, 19, a Stoneman senior, told CNN on Friday. But this is exactly what they wanted. These students wanted to punish the tens of millions of law-abiding gun owners by demanding the government take away their right to defend themselves—all for the actions of one person. Now, they are getting a taste of their own medicine, and it stinks.

“It’s unnecessary, it’s embarrassing for a lot of the students and it makes them feel isolated and separated from the rest of American school culture where they’re having essentially their First Amendment rights infringed upon because they can’t freely wear whatever backpack they want regardless of what it is,” Hogg said.

Trampling the 2nd Amendment is just fine to David Hogg, but touch the first, which is upheld by the second, and you are a tyrant.

“One of the other important things to realize is many students want their privacy. There are many, for example, females in our school that when they go through their menstrual cycle, they don’t want people to see their tampons and stuff,” he explained.

“What we should have is just more policies that make sure that these students are feeling safe and secure in their schools and not like they’re being fought against like it’s a prison,” he added.

The irony of the students’ ignorance is astonishing. Luckily, there are still many people out there that see this irony and are calling it out.

I get what you mean.

It’s REALLY frustrating when the law abiding are punished because of the actions of a criminal.
🤦‍♂️ https://t.co/5UqKM6e8pr

This is incredible. Hogg apparently now objects to giving up rights or privileges for safety, but only those rights and/or privileges that he personally cares about. https://t.co/OdSh657ClP

Destroy the second amendment?
No problem!

“I feel like our school is now a prison,” Nicholas Fraser, a 16-year-old Stoneman student said. “It doesn’t feel like home.”

Indeed, when you advocate for only government to have guns, you are making the entire country a prison. Bravo young America, you have successfully asked for fewer rights and you now have fewer rights. Hopefully, this serves as a wake-up call to those who think it is somehow heroic to punish law-abiding Americans for the actions of a single deranged lunatic.

If this ridiculous astroturf activism is not called out for what it is, these are the folks who will be responsible for creating the horrid police state that comes from their selective definition of “freedom.”

Here at the Free Thought Project, we find it is important to note that when you say, “I believe in freedom,” you don’t follow that sentence up with the word “but.”

If Impeachment Hearings Occur, They Will Backfire on Democrats