Top Story Fluorescence imaging is widely used for visualizing biological tissues such as the back of the eye, where signs… 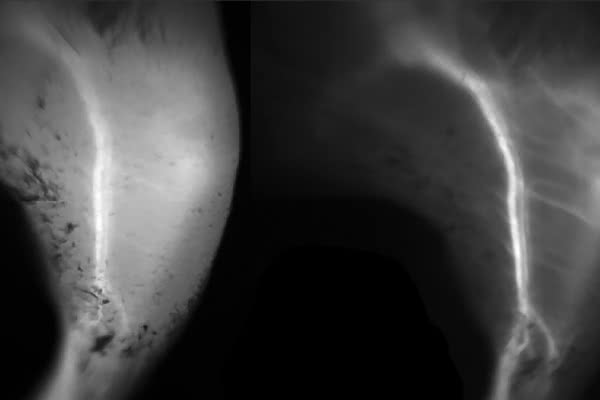 Fluorescence imaging is widely used for visualizing biological tissues such as the back of the eye, where signs of macular degeneration can be detected. It is also commonly used to image blood vessels during reconstructive surgery, allowing surgeons to make sure the vessels are properly connected. For these procedures, as well as others now in clinical trials, such as imaging tumors, researchers use a portion of the light spectrum known as the near-infrared (NIR) — 700 to 900 nanometers, just beyond what the human eye can detect. A dye that fluoresces at this wavelength is administered to the body or tissue and then imaged using a specialized camera. Researchers have shown that light with wavelengths greater than 1,000 nanometers, known as short-wave infrared (SWIR), offers much clearer images than NIR, but there are no FDA-approved fluorescence dyes with peak emission in the SWIR range. A team of researchers at Massachusetts Institute of Technology and Massachusetts General Hospital has now taken a major step toward making SWIR imaging widely available. They have shown that an FDA-approved, commercially available dye now used for near-infrared imaging also works very well for short-wave infrared imaging. Imaging this dye with a camera that detects short-wave infrared light could allow doctors and researchers to obtain much better images of blood vessels and other body tissues for diagnosis and research.

Fixing a flaw in photosynthesis could massively boost food production

2019 Preview: AI to best humans at one of world’s most complex games

The most elusive whales reveal their secrets in their wakes

Don't miss: A chance for gamers to plot their own robot revolution

Why are there so many devastating volcanic eruptions right now?

The frogs bouncing back after almost being wiped out by disease