Russian investigators have charged former Ukrainian Defense Minister Anatoly Gritsenko with inciting terrorist activities after he urged his supporters to bomb Russian trains during a televised interview in 2014.

The press service of the Russian Investigative Committee – the federal agency dealing with especially important crime – reported on Wednesday that a new criminal case had been launched.

Under Russian law publicly calling for acts of terrorism to be carried out is punishable by prison terms of between two and five years, as well as significant fines. 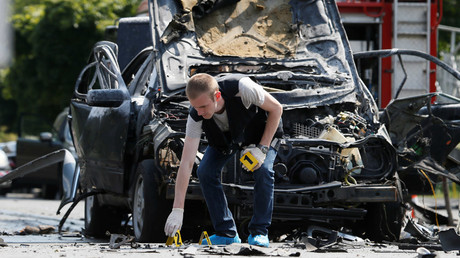 The new charges will be added to the criminal case that the Investigative Committee launched in late 2017 – into another of Gritsenko’s televised statements. Back in June 2016 the ex-minister urged his supports to explode car bombs in the Russian cities of Moscow and Taganrog. Taganrog is a South Russian port city with a population of about 250,000 and it’s not entirely clear why the ex-minister named it as a prospective target.

In the same statement Russian investigators reminded the public that the criminal code allows for the prosecution of foreign citizens suspected of committing crimes against Russian state interests – even if these crimes took place outside Russian territory.

Under this provision the Investigative Committee has already initiated several criminal cases against Ukrainian officials and military officers over war crimes against the ethnic Russian population of Donbass. In 2016, the agency charged the Ukrainian defense minister and several top military commanders with using banned methods of warfare and attempted genocide of Russian-speakers in the self-proclaimed Donetsk Republic.

In the same year, the agency charged two senior officials of the Ukrainian Defense Ministry with attempted murder after establishing that official units had deliberately and repeatedly shelled Russian territory in 2014. In 2018, the Investigative Committee started a probe against Ukrainian Interior Minister Arsen Avakov for barring Russian citizens from entering their country’s diplomatic missions to vote in March’s presidential elections.