Spread the love Dade County, FL — “Please take me out! I can’t take it anymore!” screamed Darren Rainey, a… 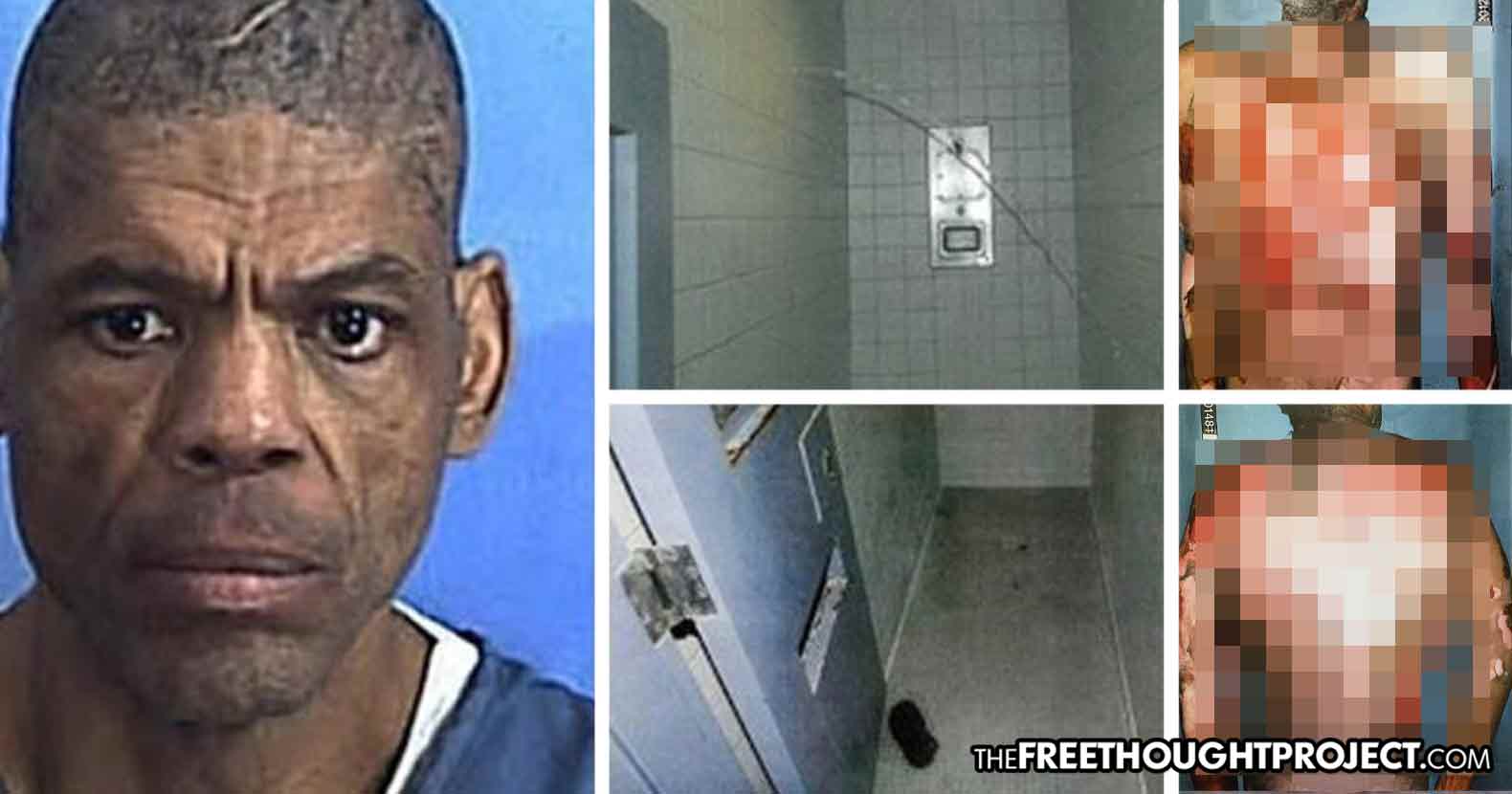 Dade County, FL — “Please take me out! I can’t take it anymore!” screamed Darren Rainey, a schizophrenic man serving time in prison for cocaine possession — as he kicked the door of the scalding hot shower repeatedly — while four guards stood just outside for two full hours, laughing sadistically at his agonizing pain.

This happened 8 years ago, this week, and neither John Fan Fan, Cornelius Thompson, Ronald Clarke, nor Edwina Williams — officers at Florida’s Dade Correctional Institution, who forced the man into the 180-degree shower as a demented punishment — were ever charged.

On the eight year anniversary of Rainey’s torturous death, his case is receiving some renewed attention on social media. This is largely due to the fact that the prosecutor who refused to charge the officers involved, Miami-Dade State Attorney Katherine Fernandez Rundle, is up for re-election.

As the Miami New Times reports:

Rundle’s decision to clear the officers is largely regarded as one of the biggest stains on her 27-year career as Miami-Dade County’s top prosecutor. Now, as protests mount over the lack of police accountability in America, the Rainey case is receiving renewed attention ahead of Miami-Dade’s August 18 election, in which voters will choose to re-elect Rundle for an eighth term or install her progressive challenger, Melba Pearson, a former prosecutor in Rundle’s office who resigned her post as deputy director of the American Civil Liberties Union of Florida in order to run against her former boss.

There is now a campaign going viral to expose Rundle and the system which allowed her to shield these killer cops from accountability.

Activist Billy Corben posted a video on Twitter this week, calling attention to the scenario. Warning, it is gruesome in nature as it shows the injuries Rainey sustained while being tortured to death.

“Is it hot enough?” one of the four cruelly quipped, as Rainey’s skin literally cooked off his bones.

“He was found crumpled on the floor. When his body was pulled out, nurses said there were burns on 90 percent of his body,” the Miami New Times reports. “A nurse said his body temperature was too high to register with a thermometer. And his skin fell off at the touch.”

This would, for all intents and purposes, appear to be an open-and-shut case of homicide — or perhaps manslaughter or negligent homicide — since the aforementioned are the facts of the case. For charges to be brought against the vindictive killers would be the natural course of events.

However, in an iniquitous move befitting the deplorable dearth in value the system deems the lives of those in State cages, Miami-Dade State Attorney Katherine Fernandez Rundle’s office announced in 2017 that none of the four who took it upon themselves to boil Rainey alive — and laugh about it — will face charges.

Despite overwhelming evidence to the contrary, Emma Lew, the Miami-Dade medical examiner who performed an autopsy on Rainey, concluded that the skin peeling was due to “body decomposition” and not burning.

“The shower was itself neither dangerous nor unsafe,” the report states. “The evidence does not show that Rainey’s well-being was grossly disregarded by the correctional staff.”

News of this abomination of justice came intentionally just before the weekend — the end of the work week being typical timing for announcements making naked the State’s unseemly and unconscionable decisions. Given Rundle’s background,  sneaking the ludicrous lack of charges against corrections officers into a weekend’s news dump is likely a familiar pattern. New Times explains,

“Rundle took over as Miami-Dade’s top prosecutor in the 1990s, after then-State Attorney Janet Reno left to join the Bill Clinton administration. She has remained the state attorney every since. In that time, she has never charged a Miami police officer for an on-duty shooting.

“It’s important to note that all Rundle had to do to show that she cared was to charge the prison guards with a crime. It is up to a jury to assess guilt. Despite the fact that a man died in a shower, and that multiple witnesses said they saw burns on his body and heard screaming, Rundle didn’t think there was enough evidence to bring criminal charges.”

Where the state attorney failed to equate searing a man’s flesh with scorching water to the point skin slipped off upon contact has investigative reporters and whistleblowers baffled.

“They’re gonna cover this up,” a nurse told Harriet Krzykowski, a psychiatric technician, on the nature of Rainey’s death the morning after the fatal shower. She was right.

Krzykowski, the New Yorker reported, ultimately blew the whistle about what had happened — and faced bullying, harassment, and had to seek therapy over abuses suffered by embittered prison staff.

Having smeared excrement all over his body and cell on June 23, 2012, Rainey — who had a history of this behavior — was escorted by guards and told to clean up. According to testimony quoted in the state attorney’s memorandum, guards checked several times and found Rainey backed into a corner, away from the water — not bathing.

That specific shower abutted a janitor’s closet, whose sink connected to a hose inserted through the wall to provide water — controls in the stall weren’t operational so guards could ensure those who refused to bathe themselves would not shut off the tap. With tiled walls and floor, a steel door with a window, a lip at the edge to prevent water running into the hall, and a single drain, the institutional shower lacked sufficient ventilation to siphon off excess steam.

Rainey had collapsed from two hours in the squelching steam of the confined space — but he landed on top of the room’s only drain, causing water hot enough to cook ramen noodles to flood the space sufficiently to cook most of his body — boiling the man like one would a lobster until there was no struggle left.

Rundle did not find this sufficient grounds to press charges — in part because she turned mostly to a fraught autopsy report, mentioned above “that has been roundly criticized by civil-rights advocates. The report claims Rainey was not found with burns when he died.  Howard Simon, executive director of the Florida American Civil Liberties Association, has said in the past that the autopsy, which was leaked to the press during the investigation, showed that a federal investigation was needed,” the New Times notes.

Additionally, Rundle’s office loudly discredited Hempstead’s diary of names as ‘inaccurate and unreliable,’ and dismissed witness accounts from other inmates as “inconsistent,” and therefore moot.

“Accordingly and in conclusion,” Rundle stated in the disgraceful memo, “the facts and evidence in this case do not meet the required elements for the filing of any criminal charge.”

Adding insult to torturous death is the fact that the cops all remained on the payroll for years. As the New Times reports,

At least three of the officers who were investigated in Rainey’s death continued their careers in law enforcement. John Fan Fan (sometimes spelled Fanfan) worked for the Florida Department of Corrections through October of 2018. According to the Herald, Thompson took a job in the federal prison system.

Clarke, meanwhile, was hired in 2014 by the Miami Gardens Police Department, where he was twice investigated for having sex while on duty. Tania Francois, a spokesperson for the City of Miami Gardens, says that after going through due process, Clarke was terminated from the police department this past Thursday.

After he brutally murdered a mentally ill man, Clarke was hired as a cop a couple of years later where he would work until just last week. He had so many complaints on him while he worked in the department’s traffic unit that they moved to fire him two years ago. The timing of his termination cannot be understated. The department likely did so to cover themselves. Had there not been a massive pushback against police corruption in recent weeks, Clarke would likely still be employed.

As Claire Bernish pointed out for the Free Thought Project, this is the treatment given most often to the mentally ill and nonviolent drug offenders. This is the State laying bare the complete lack of worth it places on those unfortunate enough to be caged in its horrendously inadequate and inhumane facilities. This is the State gifting Get Out of Jail Free cards to torturers — yet another case where a badge grants impunity of steel — even when a murder is in question.

This is the Injustice System of Police State, U.S.A. — and it’s literal Hell for people like Darren Rainey.