The head of the House Freedom Caucus, Republican Rep. Andy Biggs of Arizona, helped plan the January 6 event that…

The head of the House Freedom Caucus, Republican Rep. Andy Biggs of Arizona, helped plan the January 6 event that culminated in a storming of the Capitol, according to Ali Alexander, a lead organizer of the gathering. Alexander, a pro-Trump personality, was an early founder of the “Stop the Steal” movement, and helped bring together various right-wing factions around a mass event on January 6, aimed to coincide with objections to the counting of Electoral College votes.

Alexander made his claim in three separate livestreams in late December, adding that Reps. Paul Gosar of Arizona and Mo Brooks of Alabama were also involved. “We’re the four guys who came up with a January 6 event,” Alexander said. On December 8, the Arizona Republican Party boosted Alexander, asking supporters if they were willing to give their lives in the fight over the results of the presidential election.

His claim is also buttressed by a fourth video from a December 19 rally at the Arizona state Capitol, at which Alexander played a video that Biggs had supplied. In the video, Biggs mentions Brooks as his ally in the fight. Gosar spoke in person at the event.

Biggs’s connection to Alexander was reported on Sunday by the Arizona Republic, which quoted his spokesperson, Daniel Stefanski, denying any connection to Alexander. “Congressman Biggs is not aware of hearing of or meeting Mr. Alexander at any point — let alone working with him to organize some part of a planned protest,” Stefanski said. “He did not have any contact with protestors or rioters, nor did he ever encourage or foster the rally or protests.”

Neither Gosar nor Brooks responded to inquiries from The Intercept. Brooks, after the event, sought to legitimize political violence in a radio interview. Alexander did not respond to a text or phone call; his voicemail was full. Alexander, who adopted a new name after pleading guilty to felony property theft in 2007 and felony credit card abuse in 2008, has been suspended from Twitter and other platforms for his role in organizing the January 6 event. As the Daily Beast reported, he has said he has been unfairly blamed for the violence on January 6, and has gone underground.

Alexander’s contemporaneous claims have taken on new relevance as House Speaker Nancy Pelosi has floated the possibility of expelling members of Congress who are found to have been involved in the riot. “Your views on the 25th Amendment, 14th Amendment Section 3 and impeachment are valued as we continue,” she wrote to her colleagues over the weekend.

Section 3 of the 14th Amendment, ratified after the Civil War, reads:

No person shall be a Senator or Representative in Congress, or elector of President and Vice President, or hold any office, civil or military, under the United States, or under any State, who, having previously taken an oath, as a member of Congress, or as an officer of the United States, or as a member of any State legislature, or as an executive or judicial officer of any State, to support the Constitution of the United States, shall have engaged in insurrection or rebellion against the same, or given aid or comfort to the enemies thereof. But Congress may by a vote of two-thirds of each House, remove such disability.

Alexander made his comments in a livestream posted December 28. Jason Paladino, an investigator with the Project on Government Oversight, archived the video from Alexander’s now-suspended account and provided it to The Intercept. “I was the person who came up with the January 6 idea with Congressman Gosar, Congressman Mo Brooks, and then Congressman Andy Biggs. We four schemed up of putting maximum pressure on Congress while they were voting so that who we couldn’t lobby, we could change the hearts and the minds of Republicans who were in that body hearing our loud roar from outside,” Alexander said in the livestream.

Alexander reiterated the claim of collaborating with Biggs, Gosar, and Brooks a second time, using almost identical language in a December 29 livestream similarly provided by Paladino, who has tracked Alexander. “I’m the guy who came up with the idea of January 6 when I was talking with Congressman Gosar, Congressman Andy Biggs, and Congressman Mo Brooks. So we’re the four guys who came up with a January 6 event — #DoNotCertify — and it was to build momentum and pressure, and then on the day change hearts and minds of congresspeoples who weren’t yet decided, or saw everyone outside and said, ‘I can’t be on the other side of that mob,’” Alexander said a week before the event he predicted would bring more than a million people to Washington, D.C.

On December 21, Alexander made the same claim on a livestream. “We’re working closely with Congressman Mo Brooks, we’re working closely with Congressman Andy Biggs, and closely with, obviously, Congressman Paul Gosar, my great friend,” Alexander said. “I believe that the president should do something brave, I think the vice president should do something brave. I believe that that’s how we maintain the White House. … It’s a moral imperative to maintain the White House.”

The Office of Congressional Ethics has seen some of the claims made by Alexander and is looking into the connection between him, Gosar, Brooks, and Biggs, according to two sources familiar with the situation. The OCE was unable to confirm or deny whether any specific investigations are underway, in accordance with the office’s rules.

At the December 19 rally, two days before that claim, Alexander more clearly delineated the different roles Biggs and Gosar were playing. “Congressman Gosar has been the spirit animal of this movement, and he’s helped out where he could. He’s offered to call donors. We actually had our first D.C. march because he called me and he said, ‘You need to go to the Supreme Court.’ I said, ‘All right, my captain,’” Alexander told the audience at the Arizona state Capitol.

“One of the other heroes has been Congressman Andy Biggs. Now, when the good doctor Paul, now a friend, has been concentrating on the movement, Andy Biggs has been running ahead of him and whipping votes in Congress. So he stayed in Washington, D.C.,” Alexander noted, explaining that Biggs had “sent us a video.”

In the video, Biggs tells the audience:

I wish I could be with you today. I pledge to you that I’m going to keep fighting for President Trump. And when it comes to January 6, I’ll be right down there in the well of the House with my friend from Alabama, Mo Brooks, and dozens of others who will join me as we look at some of the elections around the country and we say, “How do you explain that?” And more than that, we’re going to stand up for this president and for the voters of America. That’s legal; not only is it legal, that’s constitutional; not only is it constitutional, it’s the moral thing to do. And we’re going to keep fighting. And I implore you to keep fighting too.

When asked why Biggs would record a video for someone he doesn’t know, Stefanski told The Intercept: “Rep. Gosar’s team asked for the video, and he provided it.”

On the day of the riot, Gosar used his official Twitter account to call for peaceful protest, urging Trump supporters “not to get carried away” so no one gets hurt, while spreading an entirely different message on Parler, a right-wing social media platform created in opposition to Twitter. “Americans are upset,” he wrote, sharing a photo of the rioters climbing the Capitol walls. 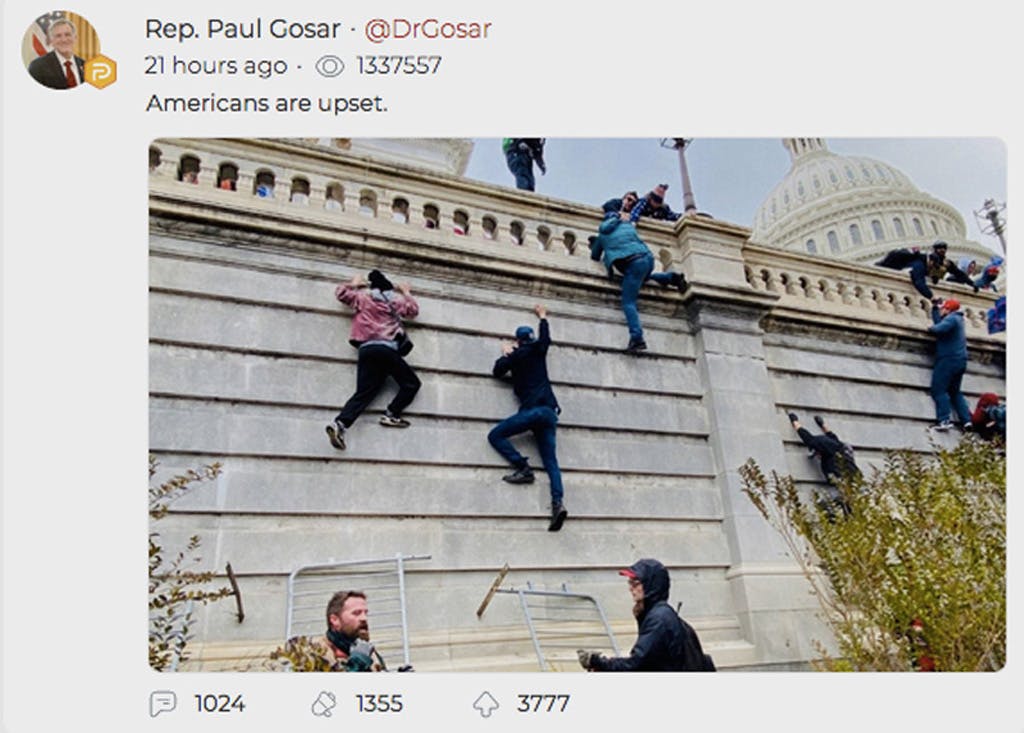 “Let me tell you an open secret. The president watches these rallies, and he’s watching you today,” Alexander said, leading the crowd variously in “Fight for Trump,” “1776,” and “Christ is King” chants.

That day, Donald Trump posted to his since-suspended Twitter account: “Big protest in D.C. on January 6th. Be there, will be wild!”

Gosar tagged Alexander on Twitter twice on January 6, and tagged him repeatedly in his posts throughout November and December.

As the mob broke into the Capitol, Gosar was in the middle of his speech objecting to the certification of Arizona’s Electoral College votes. Once the Capitol was cleared, Gosar continued to object, as blood dried on the marble floors just steps away.

The American Money Tree: The Untold Story of US Aid to Israel

The Washington Post Nominated Glenn Kessler for a Pulitzer Prize