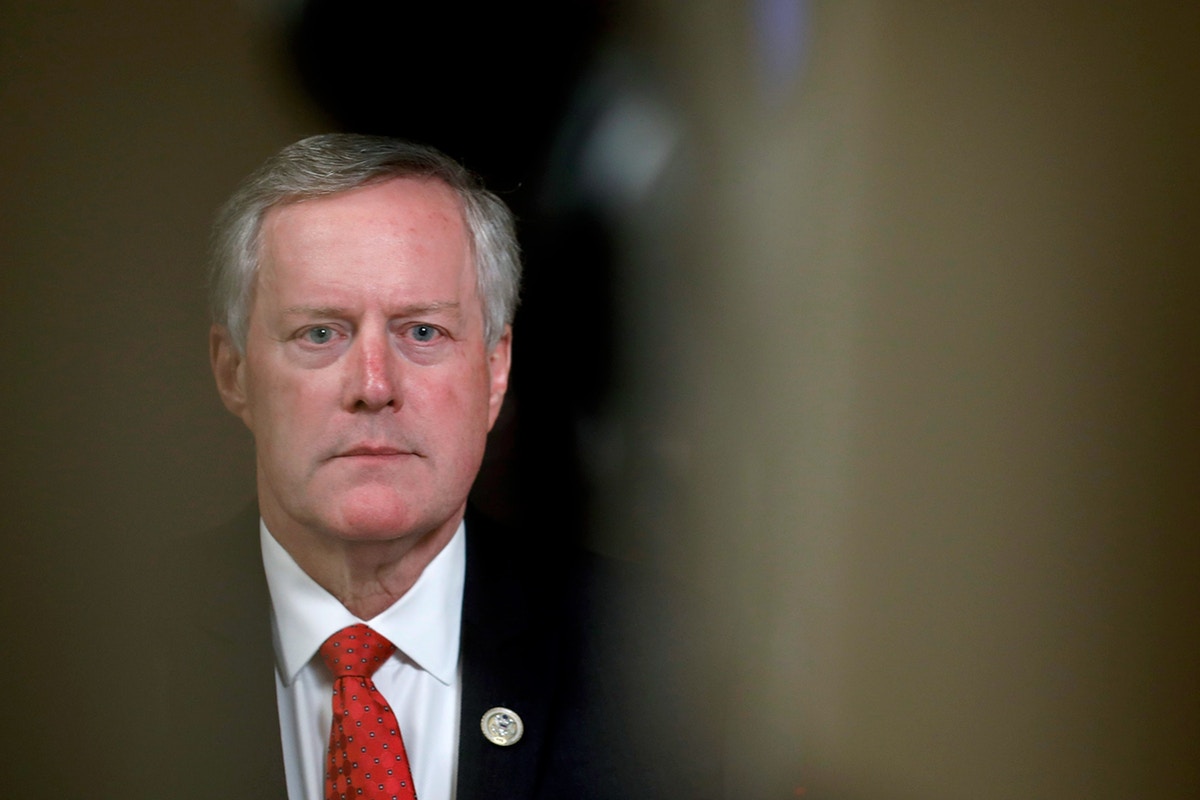 Meadows voted against House Democrats’ sweeping ethics and reform bill, which passed the chamber Friday morning on a party-line vote. But there were parts of it he agreed with, the North Carolina Republican told The Intercept.

One thing he supported, Meadows said, was the effort to reform election finance. He said that he’d tried, and failed, to add an amendment that would have eliminated Super PACs, or political action committees. However, H.R.1, a 600-page document, overall had “too many conflicting messages,” Meadows said, to get support “among conservative members.”

Super PACs remain the dark-money tool of choice for the political establishments of both parties, but Meadows’s move is a reflection of a growing consensus on both the far right and the far left that there is something wrong with the way that campaigns are financed today. From a practical perspective, rank-and-file lawmakers see Super PACs as unpredictable threats to their incumbency, and they are also deeply unpopular among the general public.

Meadows and Texas Sen. Ted Cruz introduced a bill last year that would have eliminated Super PACS, but that’s about as far as the common ground with the left goes. Instead of allowing individuals to contribute unlimited amounts to Super PACs, the legislation would allow those same people to give directly to the campaigns of the political candidates themselves.

Under current law, donors are capped at $ 2,700 per candidate. The Supreme Court, for now, has ruled that such limits are constitutional in order to maintain faith in elections and the lawmaking process, though conservative legal activists have long pushed to have them overturned. The Meadows-Cruz bill would do it legislatively.

In their newly held majority, Democrats have made curbing the outsized influence of big money in politics a signature goal.

The GOP approach to campaign finance reform reflects a longstanding ambition to rewrite the rules of the game in their favor, a fairly intuitive approach that hasn’t been adopted by Democrats in a generation. Finally, Democrats have begun to take the issue seriously. In their newly held majority, Democrats have made curbing the outsized influence of big money in politics a signature goal, and H.R.1 is a clear reflection of that ambition. The package would implement a national pilot program for public financing of congressional campaigns, extend a code of ethics to Supreme Court judges for the first time, and stop lobbyists from being paid for working on behalf of foreign governments identified by the secretary of state as having “gross human rights violations.” It would establish a federal benchmark for automatic and same-day voter registration, and require the president and vice president to divest and disclose their business interests. While H.R.1 would not get rid of Super PACs altogether, it would limit their ability to coordinate with campaigns. It would also force 501(c)(4)s — tax-exempt, nonprofit social welfare organizations or local associations that, unlike 501(c)(3)s, can engage in unlimited lobbying and political activity — to disclose donors who contribute over $ 10,000.

The package won’t become law in its current form this session of Congress; Senate Majority Leader Mitch McConnell has said he will not bring the measure for a vote in his chamber any time before 2020, but House Democrats are planning to push through separate parts of the bill in smaller pieces. Some of those might actually have a chance of passing the Republican-held Senate.

Republican lawmakers like Meadows and McConnell oppose the proposed public campaign finance provision, claiming they don’t want taxpayers’ money to go toward candidates they might themselves oppose. Meadows noted that he would get $ 3.8 million for re-election under the proposed pilot program, because he is among the top-10 biggest small-dollar fundraisers, and he was sure, he said, that liberals wouldn’t appreciate their tax dollars going to a candidate like him.

Republicans also say that enhanced disclosure requirements for PACs and 501(c)(4)s put donors at risk of harassment, and that making it easier for people to register to vote opens the door for widespread fraud. They’ve used their own party’s behavior as a case in point.

The specter of voter fraud has been a central piece of Republicans’ opposition to the measure, which passed 234 to 193. Tennessee Rep. Mark Green opposed the bill’s same-day voter registration provision during the February House Oversight hearing, and said that allowing voters to provide a sworn written statement in lieu of identification at polls would increase “the likelihood of voter fraud.” At the same hearing, Georgia Rep. Jody Hice said automatic voter registration would “open the floodgates for fraudulent voting by illegal individuals in this country.” Meadows, for his part, said voter fraud was not his main concern with the legislation.

The GOP has used the myth of rampant voter fraud as a cover for voter suppression, but the reality is that instances of voter fraud are rare. The latest case of any type of recent fraud related to elections actually took place last year in North Carolina — but it wasn’t voter fraud, a false claim McConnell has repeated. It was electoral fraud, and it was waged on behalf of a Republican.

Republican Mark Harris has admitted to unknowingly being part of a scheme to collect and submit fraudulent ballots in his November election in North Carolina’s 9th Congressional District. After he won by a slim margin of 905 votes, election officials raised concerns about a major increase in absentee ballots, many coming from Bladen County in particular. Harris had worked with longtime political strategist Leslie McCrae Dowless, who’s from Bladen County and who election officials have accused of orchestrating the plan to forge signatures, fill out incomplete ballots, and pay workers to collect absentee ballots — a violation of the state’s election law. Harris is being investigated and has dropped out of the new race he himself called for following allegations of illegal conduct.

That hasn’t stopped Republicans from citing the North Carolina incident in their arguments against H.R.1’s provision to make voting easier. In an op-ed for the Washington Post, McConnell referenced fraud in North Carolina’s 9th District, without specifying that the fraud was electoral, not voter — and more importantly, that Republicans were behind it.

Republican Illinois Rep. Rodney Davis in remarks on the floor Friday morning criticized the bill for not addressing ballot harvesting — the charge in North Carolina — though he acknowledged that Republicans were to blame in North Carolina. House Minority Leader Kevin McCarthy had the same critique, but neglected to mention his party’s own malfeasance.

Though the GOP homed in on voter fraud, Republicans also pushed back against other aspects of H.R.1 like making Election Day a national holiday, restoring critical pieces of the gutted Voting Rights Act, and increasing transparency in election finance ahead of 2020. Democrats intend to push these proposals through regardless.

While Democrats see the sweeping ethics legislation as a way to make a strong statement on the state of the country’s electoral system and the direction the party wants to go as they head toward presidential elections next year, Republicans are depicting it as un-American. Republican Rep. Clay Higgins of Louisiana said the bill “resembles Russian government policy,” but conceded that it might have some worthwhile components, which he said “in the spirit of bipartisanship” should be divided into smaller parts. He did not specify what those were.

“I hope they keep saying that,” Rep. Ro Khanna, D-Calif., told The Intercept. “Because when they call this Russian socialism,” he said, “it kind of loses its impact. So I think it’s so over the top that it’s diminished that line of attack.”

The bill is “resonating,” Khanna told The Intercept. “I mean, I get asked about it in my town halls,” he said. “And then, if McConnell blocks it, we’re going to run on it in 2020, and our presidential candidates should run on it. It should be clear what’s at stake in the presidential election.”

“We pass this, we force McConnell to take a position,” Khanna said. “The single biggest issue I think the Democrats have run on is reform. We’re the party of reform. Barack Obama ran on reform. Donald Trump disingenuously ran on reform. Bernie Sanders ran on reform. The country’s desperate for reform — this is all about reform. I love a conflict where McConnell’s literally blocking reform.”

Maryland Rep. John Sarbanes, who sponsored the bill, told The Intercept that finding pieces of the package that might get bipartisan support was a key next step. “Passing a package creates momentum and some pressure I think on Republicans on the Senate to take a closer look at what we’ve done here, and maybe judge whether their own constituents have an appetite for it. And maybe that starts to bring him around,” he said.

“But in any event, we’ve demonstrated I think that this message of reform is powerfully resonant in the electorate,” he said. The freshman class of representatives “said this is what they wanted to get done, and they got it done,” Sarbanes added. “So the power of this for purposes of, kind of, the electoral system is clear.”

“If Mitch McConnell wants to be the face of opposition to the American people getting their democracy back, be my guest. I don’t think that turns out well for him or his party in the end,” Sarbanes said.

Last week’s floor debate revealed areas of bipartisan agreement, like redistricting reforms, election security measures, transparency with respect to foreign money in elections, and the Honest Ads Act, which enhances disclosure requirements for online political ads, a response to reported Russian interference in social media during the 2016 election, Sarbanes said. “There’s enough there that we can test whether [Republicans are] serious about anything,” he said.