There is a fight raging over voting rights across the country — especially in Georgia. The contours of the battlefield are usually…

There is a fight raging over voting rights across the country — especially in Georgia.

The contours of the battlefield are usually seen as partisan; restrictions on voting rights tend to be a Republican project. But testimony in a lawsuit brought by the NAACP and former Attorney General Eric Holder over a redistricting effort led by the Georgia GOP alleges that racially gerrymandered district maps were approved by the then-Democratic caucus leader in Georgia’s legislature, Stacey Abrams — and Abrams’s involvement could upend the effort to have the new district maps thrown out.

Abrams is one of the Democratic candidates for governor in Georgia this year, vying for the nomination against another former Democratic legislator, Stacey Evans. Both candidates have claimed the mantle of championing voting rights, but accounts of Abrams role in the 2015 redistricting could call her positioning into question.

Abrams’s involvement in the gerrymandering could upend the effort to have the new district maps thrown out.

The redistricting proposal was rapidly passed three years ago, shifting the lines in 17 House districts in the state legislature. Proponents of the unusual move to reshuffle state assembly districts in the middle of a decade — only four years after the redistricting that followed the decennial national census — claimed to be making minor tweaks to the map. No one in the Georgia House publicly objected at the time, and the bill passed unanimously.

But when the bill, HB 566, arrived in the Georgia Senate, legislators and activists noticed that the maps appeared to be redrawn in a deliberate attempt to section off African-American voters in swing districts, entrenching several white Republicans in crucial seats.

“It didn’t take me long to see the redistricting in Gwinnett, in Henry, and in Atlanta were all dilutions of black voting strength,” says former state Sen. Vincent Fort, D-Atlanta, in an interview. “I remember reading it in my office and just about hitting the roof. I remember saying this was just an obvious case, even Ray Charles could see this was the dilution of black Democrat voting power.”

Though the bill met strong opposition by several Democrats in the state Senate, including from Fort and other Democratic leaders, it was too late. HB 566 passed and was sent to Republican Gov. Nathan Deal for his signature.

“When the lines are redrawn to virtually cancel out my ability or any other woman’s ability to run for office, it hurts,” said Renita Hamilton, a former Democratic candidate in one of the redrawn districts, at a press conference denouncing the proposal.

The Georgia GOP went on to maintain their majority in the House in the 2016 elections, defeating Democratic challengers in the redrawn districts. Many Democrats saw the districts as too rigged to even try to challenge Republican control, and few candidates stepped up to run in the districts in question. That election cycle, the Georgia House of Representatives had the highest number of uncontested seats in the nation.

The debate over the redistricting effort, however, didn’t end there. Last year, the Georgia State Conference of the NAACP and the National Redistricting Foundation, a group led by Holder, filed separate lawsuits against the redrawn maps, alleging that the maps represented a racial gerrymander.

House Districts 111 and 105 were changed by HB 566 with the intent of a “racial gerrymander, enacted for the purpose of electing and protecting white Republican incumbents,” the NAACP and other plaintiffs claimed. The lawsuits, which were later merged, contended that the changes were in “violation of the Fourteenth Amendment and Section 2 of the Voting Rights Act” because they were designed to “prevent African-American voters from having an equal opportunity to elect a candidate of choice.”

The Georgia lawsuit is part of a push by civil rights groups to challenge what they see as gerrymandered maps in states across the country. Courts have found that Republicans improperly used racial considerations for redistricting in Alabama, North Carolina, and Virginia.

Recent testimony in the NAACP-Holder effort to throw out the new district maps, however, paints a murkier picture than the lawsuit does of the motivation for the redistricting.

In 2015, Democrats in the state House were led by then-caucus leader Abrams, who is now a candidate for governor in the state’s Democratic primary. Lawmakers have testified under oath that the gerrymandered maps were presented to Abrams, and that she consented to the changes, which is why the Democratic caucus was instructed to support the measure. 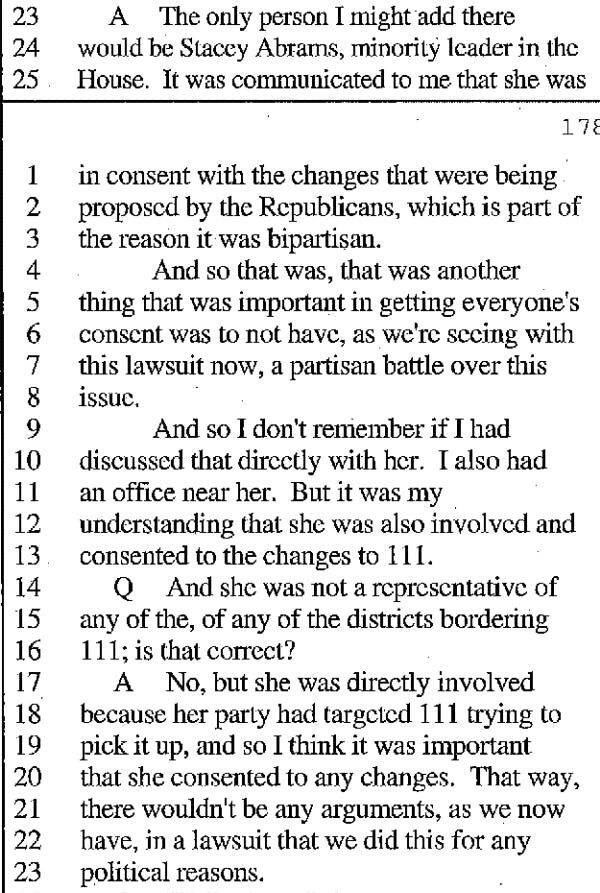 State Rep. Brian Strickland, R-McDonough, one of the members who requested the new maps, testified that he was told that Abrams “was in consent with the changes that were being proposed by the Republicans, which is part of the reason it was bipartisan.” Abrams, Strickland said, “had signed off” on the new maps.

Another member, state Rep. Randy Nix, R-LaGrange, who chaired the House reapportionment committee overseeing the process, testified that he was in communication with Abrams about the proposed changes. Nix said he welcomed Democratic input and consent for moving forward with HB 566. “We had people on both sides of the aisles who wanted to make changes,” Nix testified.

The testimony corresponds to what other Democrats serving in the legislature recalled: that Abrams, as leader, endorsed the measure and instructed the caucus to vote for it. Democratic House lawmakers, not knowing that the details of the map would undercut Democratic prospects and African-American voting power, followed her lead.

“It’s not unusual on political votes, including redistricting matters like HB 566, for the caucus to vote unanimously,” said Ronnie Mabra, a former Democratic lawmaker who served during the 2015 session, in a statement to the Intercept.

“In this instance,” said Mabra, “the Leader had information relevant to the bill that the caucus by and large was not privy to, and so when we saw that she was on board with the bill, we followed her lead.”

“It was a pretty consistent problem with the Abrams-led caucus. Questions were shunned.”

LaDawn Jones, another former Democratic Georgia House lawmaker during the 2015 session, said she recalled the vote in a similar manner. “It was a pretty consistent problem with the Abrams-led caucus. Questions were shunned,” she said. “In caucus meetings, if there was dissent on issues like this one, unless it came from the top or the leadership, it was not considered or discussed. Just follow the leadership.”

Evans, then a state representative and now Abram’s opponent in the Democratic gubernatorial primary, also voted for the redistricting bill, as did every other House Democrat — according to testimonies of some of them — under the direction of Abrams.

Abrams’s alleged role in supporting the GOP redistricting plan may undermine the gerrymandering lawsuit. Georgia Secretary of State Brian Kemp, a Republican, filed a brief last month attempting to dismiss the NAACP-Holder lawsuit, in part on grounds that Abrams had consented to the redistricting changes.

The Abrams campaign declined to comment directly on the redistricting bill, but sent The Intercept a statement affirming Abram’s support for voting rights.

“Stacey Abrams is the founder of a nonprofit that successfully forced the Secretary of State to restore thousands of illegally cancelled voters to the rolls, and submitted registrations for 200,000 Georgia voters,” said Priyanka Mantha, director of communicators for the Abrams campaign, in the statement. “In the legislature, Abrams worked to block Republican gerrymandering. She is proud of that record.”

Abrams has worked to promote voting rights across the nation. Last year, she joined the board of Let America Vote, a national Democratic group set up to highlight cases of voter suppression.

But Abrams has also courted controversy over her voting rights record. In 2011, Abrams supported a Republican measure to cut early voting in half, from 45 days to 21 days.

She later founded the New Georgia Project, a group with the ambitious goal of registering hundreds of thousands of voters of color, garnering both praise and skepticism from progressives. The group raised $ 3.6 million during the 2014 elections, paying Abrams $ 177,500 for her role as part time chief executive. The following year she was paid $ 85,000 for a year for 15 hours a week of work. Though the group submitted thousands of new voter forms, the rate of voter registration was still below that of the 2010 election four years prior. The New Georgia Project has also filed lawsuits claiming that Georgia state officials have engaged in voter suppression.

Abrams’s voting record as a state legislator, however, has received little scrutiny.

Abrams has projected a national profile as a fiery progressive, with glossy profiles in national outlet like the Washington Post, The Nation, and Cosmopolitan, largely focusing on her background. Abrams’s voting record as a state legislator, however, has received little scrutiny.

The Abrams-supported revision of the program increased the GPA threshold for qualifying students, lowering the number of students who could obtain free tuition. The Abrams campaign claims that she supported the effort in order to gain a seat at the negotiation table to prevent more draconian cuts. Other Democrats say they had no idea Abrams had been secretly negotiating with the governor and that Abrams provided bipartisan cover — including appearing with Deal for the signing ceremony — to undermine one of the most progressive higher education laws in the South, with little to show for it.

As The Intercept recently reported, Abrams bucked most Democrats in Georgia’s General Assembly and made the unusual decision last year to help Republicans rewrite state liability laws to make it much more difficult to hold bank executives and directors accountable for their predatory lending decisions. Georgia was ground zero for subprime lending practices that fueled the housing crisis and financial meltdown, and the vote last year came in response to an Obama administration effort to hold bank executives responsible for their role.

The accounts of the redistricting bill that indicate Abrams supported the 2015 gerrymandered maps angered Fort, who for years championed voting rights in the state legislature and has closely monitored the NAACP-Holder lawsuit. He pointed to the testimony on the gerrymandered maps and Abrams’s support for the GOP bill in 2011 to rollback early voting.

“When you put all that together, it’s really disturbing,” the former Atlanta senator said. “It calls into question the profile that she’s tried to create as a protect-your-voting-rights candidate. It seems to me she was collaborating with Republicans to weaken black voting rights.”

Top photo: Stacey Abrams holds a news conference to announce she has qualified to run for governor on March 6, 2018 in Atlanta.