Georgia Sen. David Perdue claims in his official biography that during his time as CEO of Dollar General from 2003…

Georgia Sen. David Perdue claims in his official biography that during his time as CEO of Dollar General from 2003 to 2007, “he created thousands of quality jobs and helped working families make it from payday to payday.”

During that time, Dollar General opened up over 100 new stores in Georgia, bringing the total to 464 in the state. While Perdue earned over $ 50 million in total compensation from the company, the employees holding those allegedly quality jobs launched multiple lawsuits claiming that Perdue’s generous executive compensation was the product of wage theft and systemic exploitation.

Under Perdue’s leadership, no less than four class-action lawsuits — eventually combined into one — were filed against the company for wage theft, alleging systematic misclassification of managers to deny them overtime pay. The company’s business model relied on exploiting a loophole in overtime rules. If an employee could be classified as a “manager,” then the company could push them to work 60 or 80 hours a week but pay them no overtime or extra salary.

The company’s annual reports during the time Perdue ran it emphasized that Dollar General pursued “lean staffing of usually two to three employees in the store at any time” and stressed that “changes in minimum wage laws” could undermine the company’s bottom line. The company also warned that profits would be hit if “a significant portion of our employee base unionizes, or attempts to unionize.”

Dollar General paid $ 8.4 million in 2014 to settle allegations that it had withheld overtime compensation to its managers, who rarely performed managerial duties and instead performed the normal functions of running a Dollar General store, for 60 to 90 hours per week. The lawsuit was filed on Purdue’s watch in 2006. Dollar General had also paid out $ 18.7 million the same year for gender-based pay discrimination for violations that had also occurred on Perdue’s watch.

In his successful 2014 campaign for the U.S. Senate, Perdue showed that his own views closely mirror those described in Dollar General’s financial statements. “As I have said, if you increase the minimum wage, you will kill jobs in this country,” Perdue said in a debate with his Democratic opponent.

The Republican Senate majority has steadfastly refused to take up a possible hike in the minimum wage. The Democrat-controlled House passed a minimum-wage increase that would raise the wage from the current $ 7.25 to $ 15 by 2024, which all but six Democrats voted for and all but three Republicans voted against.

The two Senate races in Georgia, which will hold a runoff on January 5, will determine both control of the Senate and the likelihood of an increase in the minimum wage, which is virtually guaranteed if Democrats win control of the Senate. Data from the National Employment Law Project shows that 45.3 percent of Georgians make less than $ 15 per hour.

“The convergence of low wages and increased cost of living was already a problem and the pandemic made it worse for retail workers,” said Valerie Barnhart, a spokesperson for United Food and Commercial Workers Local 1996, which represents retail workers in the South. “We need to see the minimum wage go up in Georgia to at least $ 15. That’s not going to happen at the state level because of the Georgia General Assembly. That’s why these Senate races are so important because this is the only way Georgia workers will get a raise.”

“The economy is continuing to create more of our core customer,” Perdue’s successor as Dollar General CEO, Todd Vasos, announced on a Wall Street earnings call in 2017. Vasos was referring to the fact that rising levels of poverty meant more shoppers at Dollar General. Rising poverty means not just shoppers more likely to seek the lowest prices, but also declining rates of reliable car ownership, which forces people to seek what is immediately in their town or neighborhood — which is a dollar store.

On Perdue’s watch at Dollar General, a similar dynamic held. Nationwide, Perdue oversaw Dollar General’s growth from 6,273 stores to 8,260. A Harvard Business School case study done in 2007 with Perdue’s collaboration attributed the explosive growth to two factors: “the new bargain-based mentality of the American consumer” and “the rising percentage of U.S. households in lower-income brackets and/or fixed incomes.”

“It’s been pretty clear that these stores do well during economic downturns,” said Jerry Shannon, an assistant professor of geography at the University of Georgia who has studied the impact of dollar stores. Dollar stores grew, Shannon noted, with “the decline of small, independent retailers in the wake of both the recession and the increasing corporate consolidation of retail options either through Walmart or other large supermarket chains, and the increasing number of households facing precarious economic circumstances in the wake of the recession.”

Perdue took the helm of Dollar General in the wake of the 2001 dot-com recession, reaping the benefits of higher poverty by pushing expansion. Perdue’s work reached its zenith when the company was purchased by a consortium of private equity firms and banks led by KKR in 2007. Perdue received a $ 42 million payout; $ 9.5 million of that payout was a severance agreement triggered by a change in ownership — a change in ownership that was facilitated by Perdue, Securities and Exchange Commission filings show. 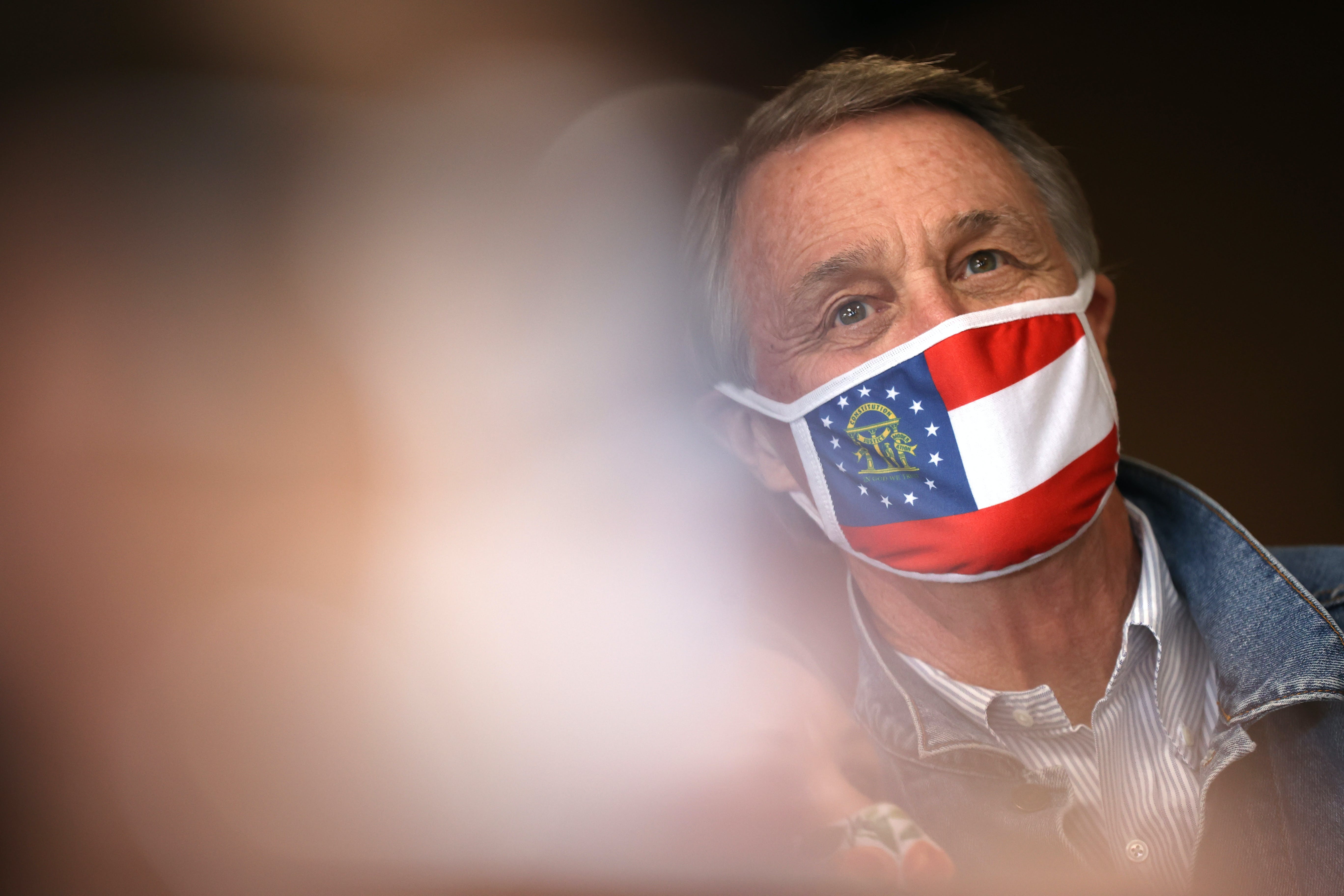 Republican Senate candidate David Perdue looks on during a campaign event at Pot Luck Cafe on Oct. 31, 2020 in Monroe, Ga.

As governor, Perdue repeatedly cut funds for public education — $ 1 billion annually below the established formula. A 2016 study from the Quarterly Journal of Economics found that increased state education spending led to higher wages and lower poverty in the neighborhoods receiving the additional funds.

“Dollar stores have proliferated like crazy and particularly targeted small towns, rural areas, and low-income urban neighborhoods, particularly African American ones,” said Stacy Mitchell, co-director of the Institute for Local Self-Reliance, which advocates for sustainable local economies. “Dollar stores feed more Americans than Whole Foods Market, and what we’ve learned is that they’re not just a symptom of poverty, they are a cause of it.”

A central way that dollar stores generate poverty is that they undermine independent locally owned grocery stores that sell produce. “Dollar stores will come in and set up across the street from an independent grocer,” Mitchell said. “They sell key items for very low prices at a loss. As a grocer, you’re not making very much money on the fresh food, you make it on the packaged stuff. If you lose that profit margin, you go into the red. Time and time again, you see dollar stores come in and cause existing grocers to close,” Mitchell said.

“Dollar stores feed more Americans than Whole Foods Market, and what we’ve learned is that they’re not just a symptom of poverty, they are a cause of it.”

Given the impact of Dollar General on local business ecosystems, some municipalities in the state have hit the pause button. DeKalb County has announced a moratorium on new dollar stores in unincorporated areas, as has the city of Stonecrest. DeKalb County Commissioner Lorraine Cochran-Johnson has led an effort in the county to place a moratorium on new dollar stores and said that the push came out of complaints from her constituents. “A person said to me, ‘I hope you understand that dollar stores are not economic development in our communities. They cause us far more harm than good,’” Cochran-Johnson recalled. “What you find is when there is a massive presence of dollar stores, that’s where you tend to see food deserts and the greatest health disparities.”

Mitchell also noted the low wages paid by dollar stores. “Dollar stores do have very low wages and a history of wage and hour lawsuits and [Occupational Safety and Health Administration] violations, as well as history of violence, with quite a few staff members who lost their lives. The quality of these jobs is quite poor. Even the so-called managers are paid very low for the number of hours they work.”

David Perdue’s use of low wages as a business tactic didn’t stop with Dollar General. The Atlanta Journal-Constitution reported in 2017 that a 78-year-old trucking company acquired by David and Sonny Perdue in 2012 apparently failed as a “result of poor management that manifested in low pay and aging equipment, among other things, while the industry has just enjoyed two prosperous years.”

A spokesperson for David Perdue defended his role as CEO. “As CEO of Dollar General, David Perdue led a turnaround — expanding its presence to over 8,500 stores nationwide and creating thousands of quality American jobs. Perdue worked his way through college and created tens of thousands of jobs throughout his career — he has worked hard and earned everything he’s got,” and accused Perdue’s opponent Jon Ossoff of being a “privileged liberal.”

The January election is likely to be extremely competitive and expensive. Both Democratic candidates running, Ossoff and Rev. Raphael Warnock, have pledged to support a minimum-wage increase in the Senate. Perdue’s running mate, Kelly Loeffler, does not have a public position on raising the minimum wage.