An enormous effigy of John Bercow, the former House of Commons speaker, was set on fire along with the Parliament… 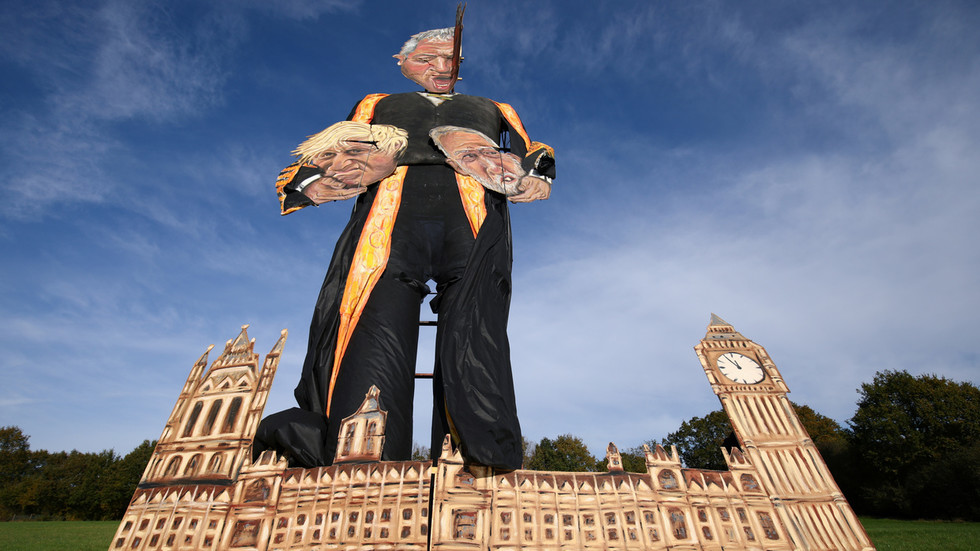 An enormous effigy of John Bercow, the former House of Commons speaker, was set on fire along with the Parliament building and the heads of PM Boris Johnson and Labour leader Jeremy Corbyn as part of a Guy Fawkes bonfire.

The 11-meter effigy went up in flames in the town of Edenbridge, Kent, serving as the culmination of the traditional torchlight parade.

Bercow, who stepped down as speaker on Friday, has been in the spotlight recently, having to frequently shout ‘order!’ amid heated Brexit debates in Parliament.

“This year we have chosen the infuriating Commons Speaker John Bercow as our celebrity guy,” the local bonfire society chairman, Bill Cummings, said. “Our message to Mr Bercow is that you cannot keep disrupting Parliament and this is one situation you cannot argue yourself out of.”

The MP was in tight competition with controversial TV personality Piers Morgan for the celebrity spot in the almost century-old local tradition.

However, he was not the only one to be burned – ‘Bercow’ was holding the severed heads of Prime Minister Johnson and his staunch opponent Corbyn while the entire Parliament building stood at his feet.

Before the blazing finale, Bercow’s effigy suffered from the strong winds, losing its head.

Guy Fawkes Night commemorates the events of November 5, 1606 when a group of English Catholics attempted to blow up the Parliament over their grievances with the country’s policies.