Piers Morgan eviscerated Health Secretary Matt Hancock over his handling of the coronavirus pandemic, hours after Downing Street lifted its… 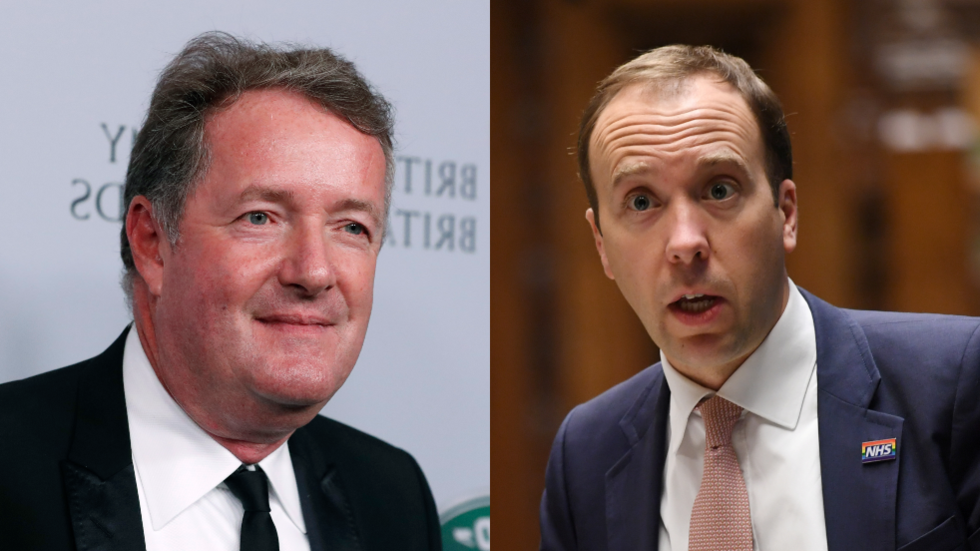 Piers Morgan eviscerated Health Secretary Matt Hancock over his handling of the coronavirus pandemic, hours after Downing Street lifted its boycott of the network. Morgan’s performance earned him credit from left and right.

The cantankerous Piers Morgan has been a fierce critic of the government’s handling of Covid-19 from the outset of the pandemic, so much so that Downing Street refused to allow MPs to appear on ITV’s ‘Good Morning Britain’ program in April. Following the departure of Boris Johnson’s communications chief, Lee Cain, and senior adviser, Dominic Cummings, last week, the boycott was lifted on Monday, and Morgan launched straight into a live tirade against Hancock.

“You said that the public didn’t need to wear masks. Now you say they do. You said it was fine to shake hands … you said mass gatherings were fine … Now we know that was a catastrophe,” Morgan thundered. “The lockdown was at least two weeks too late. We stopped community testing at a critical time because we were pursuing … a policy of herd immunity, which we then screechingly reversed.”

After a Gov’ boycott of 202 days @piersmorgan finally gets a chance to hammer squirming Health Secretary Matt Hancock with a charge sheet of failures in a rip roaring master class of how to hold a Gov’t to account #GMBpic.twitter.com/zFR1HhMNzY

“I put it to you,” Morgan concluded his grilling, “Given that we now have over 50,000 deaths in this country, which is the worst death toll in the whole of Europe, why are you still health secretary?”

Hancock defended his record, saying his government had met its testing targets, and had changed its guidance on gatherings as new information on the virus’s spread came to light. “Of course we’ve made mistakes,” the West Suffolk MP admitted, before adding: “We’ve been learning.”

Morgan is himself no stranger to controversy. Back in January, he was hammered for allegedly using racist language on air, and more than a thousand Ofcom complaints were filed against him. He has also alienated many viewers in the US with his criticism of Donald Trump and his advocacy for gun control.

However, his confrontational face-off with Hancock earned him praise from both sides of the aisle. As left-wing pundit Owen Jones tweeted, “If more of the media had uncompromisingly challenged the government’s catastrophic handling of the pandemic like @piersmorgan here, then tens of thousands of lives could have been saved.”

The truth is, if more of the media had uncompromisingly challenged the government’s catastrophic handling of the pandemic like @piersmorgan here, then tens of thousands of lives could have been saved. pic.twitter.com/mC0Nog9bx0

In just a few minutes, Piers Morgan holds this putrid cabal of feral shysters to account, which is more than the BBC have done in the last 6 months.I hate to say it, but Morgan is acting as a journalist. Marr, Kuenssberg Peston etc are stenographers,The difference is stark.

Shortly after his ITV appearance, Hancock told the BBC that a vaccine, manufactured by US drug firm Pfizer, may be rolled out before Christmas. However, he said the “vast majority” of Britons would have to wait until 2021 for the shot.

The UK recorded nearly 25,000 new cases of Covid-19 on Sunday. SInce the pandemic began, Britain has registered more than 1.3 million cases of the disease, and almost 52,000 deaths. Worldwide, the virus has infected almost 55 million people and killed 1.3 million.