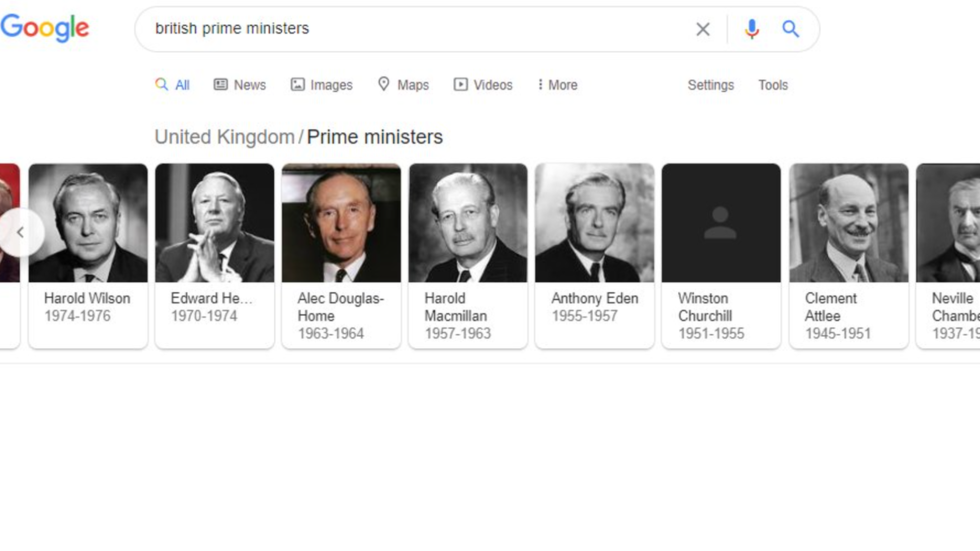 Google has claimed there is a perfectly benign reason for Winston Churchill’s photograph disappearing from its search engine – but many are unconvinced, as the iconic British PM is now in the eye of the protest storm.

In a list of UK prime ministers generated by the tech giant, Churchill lacked a photograph, while his predecessors and successors were all given portraits.

“Utterly disturbing that such a company can have that power to censor our British history,” wrote one outraged Twitter user.

Google has removed Churchill’s photo out of all the previous Prime Minister’s photos.Utterly disturbing that such a company can have that power to censor our British history.Shame on you @Googlepic.twitter.com/aRC0PY93qs

Breitbart journalist Chris Tomlinson suggested there was something sinister afoot after pointing to the fact that a statue of Churchill in London had only recently been boarded up, purportedly in an effort to shield it from Black Lives Matter demonstrators.

“We’re aware an image for Sir Winston Churchill is missing from his knowledge graph entry on Google,” the firm’s search liaison arm said on Twitter.

The company soon acknowledged the error, but they insisted it was not purposeful and would be fixed.

We’ve now resolved the issue that was preventing the picture of Sir Winston Churchill from being updated to appear in his knowledge panel and Knowledge Graph-related lists. Again, this was not purposeful. Our apologies for the concerns caused. pic.twitter.com/qoH2tEWhhq

“Images in such panels are automatically created & updated. During an update, they can briefly disappear,” Google said in a statement on Twitter. “We’ll want to explore exactly why an automatic update caused it to disappear & see if there are any improvements in those systems to address.” The company later announced that the issue had been resolved.

Anger over the decision to cocoon the Churchill statue, along with other monuments, led to counter-protests in London and other British cities over the weekend. Scuffles with police and BLM demonstrators broke out after crowds of veterans and other self-described patriots showed up, saying they were attempting to guard the landmarks from harm.