Far from restoring order, the arrival of federal agents from the Department of Homeland Security (DHS) and Border Patrol in… 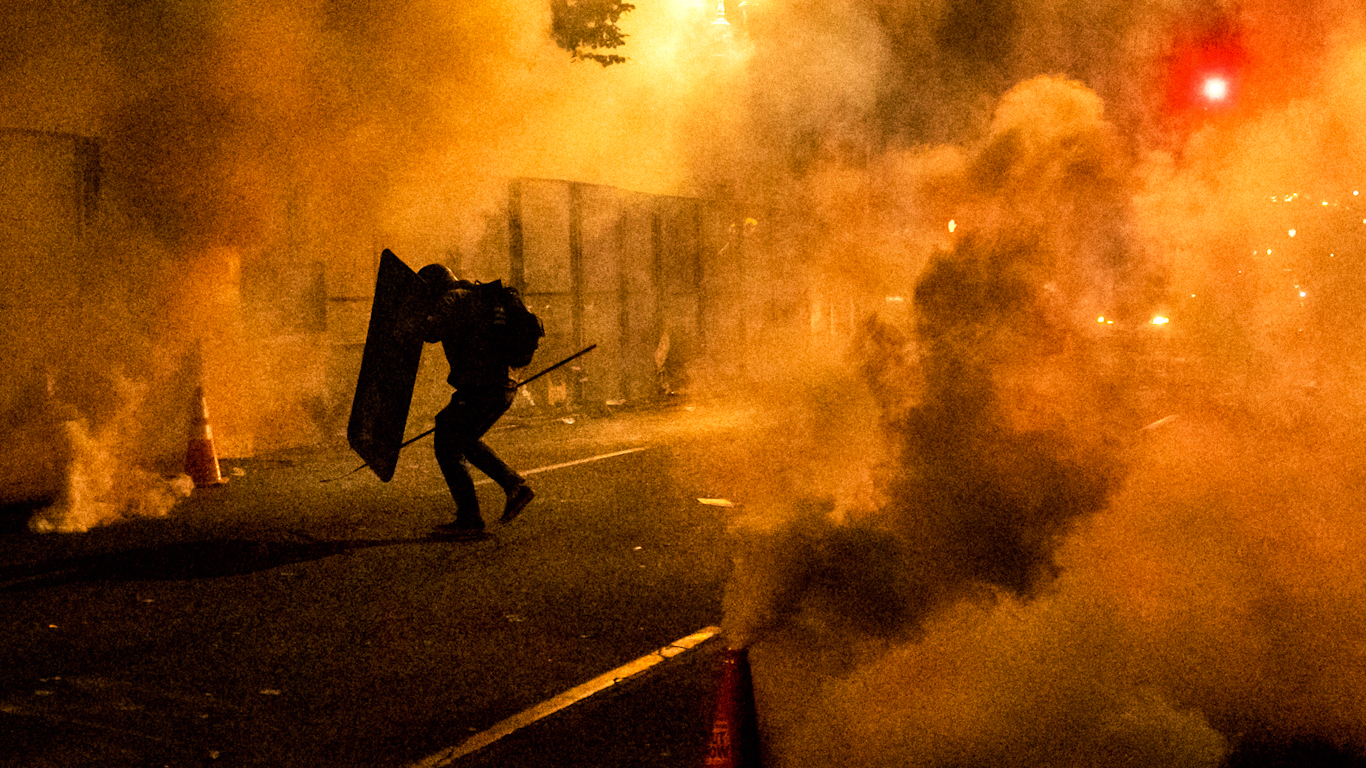 Far from restoring order, the arrival of federal agents from the Department of Homeland Security (DHS) and Border Patrol in Portland, Oregon has only heightened tensions, with agents attacking and arresting protesters nightly. DHS’ Acting Deputy Secretary Ken Cuccinelli took to social media yesterday to share images of items confiscated from demonstrators.

“Here is a shield and a couple of gas masks from a rioter arrested in Portland. Not a sign with a slogan that someone expressing their first amendment rights might carry, but preparations for violence. Peaceful protester? I don’t think so,” he wrote. Evidence that demonstrators were using inherently defensive items like shields and gas masks to protect themselves from tear gas, rubber bullets and pepper balls appeared not to convince many to drop their support of the movement. “‘The steps you take to protect yourself from the violence I perpetrate against you are the evidence that you deserve that violence’ is rarely articulated quite so plainly. At least not in public,” replied Angus Johnston of Hostos Community College (City University of New York).

Here is a shield and a couple of gas masks from a rioter arrested in Portland. Not a sign with a slogan that someone expressing their first amendment rights might carry, but preparations for violence. Peaceful protester? I don’t think so. pic.twitter.com/0Re1V129ge

The DHS justifies its invasion of Portland — over the objections of city and state officials — on the grounds that it is protecting federal property, particularly the Mark O. Hatfield Federal Courthouse, which has become a venue of intense struggle. “Simply put, we need to make sure [it is] not burned down, as rioters have tried to do for weeks. That’s our mission,” it stated. Yet it is far from clear whether the DHS has the legal remit to do so. Its own website notes that its mission is “striving to prevent future [terrorist] attacks against the United States and our allies, responding decisively to natural and man-made disasters, and advancing American prosperity and economic security long into the future,” none of which would be covered by protesters graffiting federal property. The American Civil Liberties Union is suing the government and the DHS for their actions.

Despite this, Cuccinelli has promised to expand the use of federal troops or police nationwide, including into a number of Democratic-run cities. “This is a posture we intend to continue not just in Portland but in any of the facilities that we’re responsible for around the country,” he told NPR.

Fears over live ammo and violence against the press

Local elected officials appear far more concerned about the violence of the feds than of any damage protesters have done. The city’s mayor, Ken Wheeler, has repeatedly demanded federal agents leave the city immediately. Instead, they gassed Wheeler himself when he joined the demonstrations.

What I saw last night was powerful in many ways. I listened, heard, and stood with protesters. And I saw what it means when the federal government unleashes paramilitary forces against its own people. It is unconscionable and un-American. We are all committed to change – this must stop so the work can move forward,” he wrote.

Wheeler also raised concerns over unconfirmed reports that agents had been authorized to use live ammunition. Despite Wheeler and many other Oregon representatives’ opposition to the President’s moves, demonstrators themselves have criticized the mayor for failing to rein in his own police force, who have been no less aggressive. Despite a judge banning the use of tear gas, earlier this month, police broke the court order and declared a riot, using flashbang grenades and tear gas to disperse protesters.

According to the U.S. Press Freedom Tracker, Portland has seen 52 attacks on journalists since the nationwide protests against racist police violence began in late May, Minneapolis being the only city recording more. Not counted among the 52 is the case of MintPress contributor Wyatt Reed. Late Wednesday night, federal agents shot him in the face with pepper balls, injuring his eye. Last night, he was also hit in the knee and the hand. “For the record I was sitting by myself, well away from anyone else & nowhere near any of more militant demonstrators when these “specially trained” federal agents shot me directly w chemical weapons projectile,” he tweeted.

The current protest movement was sparked by the viral images showing the police killing of George Floyd in Minneapolis. Since then they expanded to every state in the union and to other nations. One recent Morning Consult poll found that 23 percent of police officers said they held “very” or “somewhat favorable” views of white supremacy, by far the highest proportion of over 100 identifiable groups the survey asked. President Trump has opted to confront the protests head on, rather than make concessions. If shields and gas masks are now considered weapons, it appears likely that more government escalation is on the cards for Portland.

The TPP Was All but Dead, Now DC Think Tanks Are Quietly Urging Biden to Bring It Back