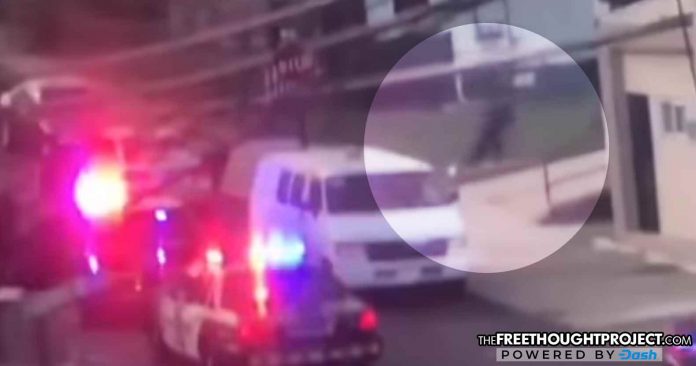 Pittsburgh, PA — An extremely disturbing video was shared with the Free Thought Project Tuesday night which shows Allegheny County Police in East Pittsburgh shoot and kill a 17-year-old boy as he fled a traffic stop on foot. The boy was a passenger in a vehicle that had been stopped by police.

According to police, they responded to calls of a shooting in the neighborhood of North Braddock. When they arrived, they found a 22-year-old man who’d been shot and witnesses reported a vehicle fleeing the scene.

Police then found a vehicle fitting the description of the car which allegedly fled the scene, so they pulled over the driver. As police were placing the driver into handcuffs, the 17-year-old child and another person exited the vehicle and took off running. This decision would prove to be fatal for the 17-year-old.

To show how unnecessary the shooting was, police are asking for the third person—who escaped—to turn himself in to let them know what happened.

“ACPD Superintendent Coleman McDonough is asking that he turn himself in so that he can give a comprehensive description of what occurred this evening,” police said in the press release.

“Anyone having information on these incidents, or video of any portion of the incidents, is asked to contact the Allegheny County Police Department. Callers to the ACPD Tip Line can remain anonymous – the number is 833.ALL.TIPS (833.255.8477). The department can also be reached via its social media sites,” the county police department said. In a Facebook post, the department added, “Please note that information is still being gathered regarding these incidents and is subject to change. Additional information will be provided as we are able.”

Indicating that the boy who was shot was unarmed, police have not stated whether or not they found a weapon on the scene. Rest assured, had there been a weapon, they would have stated this fact immediately. Also, according to witnesses the boy was unarmed.

TWO WOUNDED: After a shooting in North Braddock and then shots fired after police pull over the suspect’s car in East Pittsburgh. Stay with @KDKA for updates. pic.twitter.com/gZuq1CeiRS

Whether or not this person posed a threat remains unknown. Even if this draconian law was used, as the police report states, officers on the scene couldn’t have known whether or not this boy had committed a crime—nor did they have enough time to deduce whether or not he was imminent threat to others.