Fate Vincent Winslow was sentenced to life without the possibility of parole after selling an undercover officer $ 20 worth of marijuana in 2008. As the middleman between the cop and a dealer, he made $ 5 in the transaction.

For 12 years, Winslow, who is now 53 years old, was imprisoned at the Louisiana State Penitentiary, better known as Angola — a prison complex roughly the size of Manhattan that sits atop a former slave plantation. During that time, more than a dozen states legalized recreational marijuana. While Winslow made 80 cents a week cleaning crowded prison dorms, pot entrepreneurs made millions selling the same drug that landed him in prison. The reason was not a mystery to him. “We both [know] no money no justice that’s just the way the world is,” he told the Intercept in 2018.

But a series of unexpected twists and significant changes in the criminal justice system led to Winslow’s freedom last week. “I am so full of joy. I never thought this day would come!” he told The Intercept a few days after his release.

For most of his sentence, Winslow’s chances of getting out were virtually nil. He is guilty of the crime he was convicted of, so there was no path to getting his conviction thrown out. And it was his fourth offense, precluding the possibility of catching the attention of a public sympathetic to the plight of “first-time offenders” — like activists did with Alice Marie Johnson — to appeal to the mercy of executive lawmakers with pardon power. Johnson was granted clemency by President Donald Trump after viral appeals from celebrities like Kim Kardashian, who stressed that Johnson had made just one mistake. Because Winslow wasn’t eligible for parole, it was unlikely he would get a grant of clemency from the Louisiana governor, as governors tend to defer to parole boards.

He didn’t have a lawyer until his case was taken up by the Innocence Project of New Orleans in 2019. That his case was taken up by a group whose primary goal is to take on cases in which the prisoner is innocent of the crime, and whose most high-profile work has been to overturn wrongful convictions in capital punishment cases, signals a shift in the advocacy community’s understanding of innocence, guilt, and punishment. 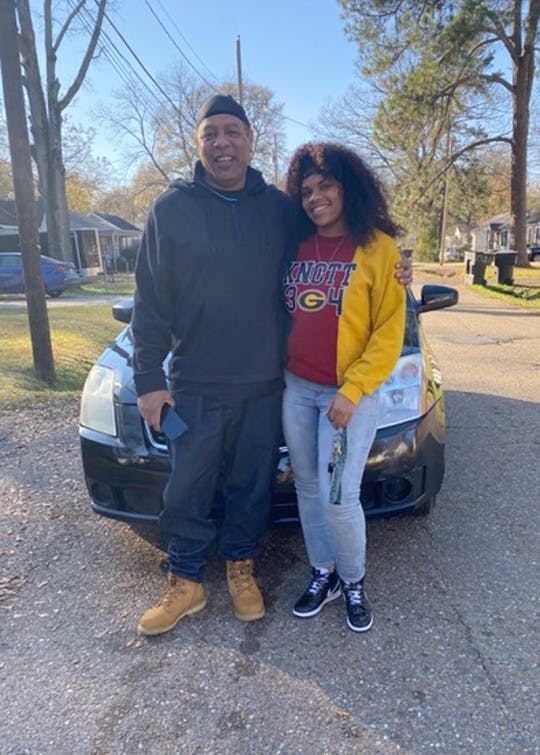 In the spring, as Covid-19 ravaged Angola, Winslow got sick and feared he might die. The guards’ handling of the crisis did not inspire confidence, he said at the time.

“Today all the guards showed up to work with masks on to protect themselves from us, when it is us that needs protection from them,” he wrote in April. “No caution for human life, no compassion, no Love.”

Three months later, in July, a change in Louisiana law regarding post-conviction changes to sentencing, coupled with the Innocence Project’s advocacy and the support of the local prosecutor, made Winslow’s release possible. On December 15, the judge overseeing his case resentenced him to 12 years of time served, and he was released the next day.

His last night in prison, too restless to sleep, Winslow fantasized about the perks of freedom. “Can’t wait to get some Popeyes chicken!” he joked. A few days later he had a feast of fried chicken, red beans, and mashed potatoes, a far cry from the prison fare he ate for years in a crowded mess hall.

Winslow’s fate was a consequence of unjust sentencing laws, an underfunded public defense system that so often lacks the resources to vigorously defend indigent clients, and the racism that is pervasive throughout the criminal justice system.

In 2008, he’d been living on the streets of Shreveport, Louisiana, when two undercover officers approached him and asked for “a girl.” Winslow declined to bring them a sex worker. But he was able to get them some weed. He went to a dealer he knew and returned to the cops with $ 20 worth of pot. Winslow has said that he took part in the deal because he was hungry and didn’t have enough money for food.

The officers arrested him — but not the white dealer. Winslow went to trial. The 10 white jurors voted guilty, while the two Black jurors voted not guilty. Because he had priors — all nonviolent, all linked to living on the street and drug addiction — the prosecutor, Jason Brown, pursued life without the possibility of parole. Brown, who was later fired for withholding evidence in a murder case, was recently discovered to have “Whites Only” signs on his property.

Eight years later, in 2018, Winslow wrote to The Intercept that maybe a rich person would take notice and help him get a lawyer to appeal his sentence, but indicated he wouldn’t be holding his breath: “A rich person … ha ha,” he wrote skeptically. “Luck does happen …”

The next year, Jee Park, the head of the Innocence Project in New Orleans, heard about Winslow’s case from another New Orleans lawyer. “Whether it’s an innocence case or not, there’s something wrong with this case. Take a look at it,” she recalled that he told her.

“Whether it’s an innocence case or not, there’s something wrong with this case. Take a look at it.”

Still, Park approached District Attorney James E. Stewart Sr., a former judge elected in 2015 and the first Black top prosecutor in Caddo Parish. Stewart is no flamethrower. Caddo Parish is conservative even by Louisiana standards, and his campaign messaging revolved around vague themes like “community investment.” But he was a far cry from his predecessor, Charles Scott, who was part of a trifecta of prosecutors that earned the parish the nickname “death penalty capital of America” in the aughts.

After he carefully reviewed the documents, Stewart told Park that he wouldn’t oppose clemency for Winslow, but he couldn’t be seen as subverting the will of the jury or the authority of the original sentencing judge, she told The Intercept. Stewart’s office declined to comment for this article.

Park’s team pored over the case for months, weighing different legal strategies. In the fall of 2019, the Louisiana Supreme Court agreed to take up a case — State v. Harris — that involved a claim of ineffective assistance of counsel, an argument that a defendant’s sentence should be revisited because his trial lawyer hadn’t put up a strong enough defense during the sentencing portion of the trial, failing to perform adequate discovery or call witnesses. At the time, Louisiana was the only state that prohibited a claim of inadequate counsel post-conviction.

“We knew the outcome of this case could have an impact on how we shape our legal claim for Fate,” Park told The Intercept.

There was plenty of evidence in the court record that Winslow’s public defender neglected to take basic steps that would have mitigated his sentence. The lawyer didn’t hire an investigator. He failed to inform the court that Winslow was unhoused. He failed to make it clear that Winslow was not a regular dealer, or bring up the fact that the white dealer who was never arrested gave Winslow the pot. “His attorney even failed to say ‘I object,’ when the verdict was announced, which is standard procedure,” Park said.

Park had a solid argument, but a positive outcome was far from guaranteed.

“Bringing claims of ineffective assistance of counsel successfully is quite rare,” David Carroll, executive director of the Sixth Amendment Center, told The Intercept. “It’s a very high burden of proof. Plus, the court has to admit a mistake was made and that the lawyers did a bad job; that’s rarely going to happen.” A 2010 Innocence Project study found that in 81 percent of cases where a suspect was exonerated based on DNA evidence, the courts had initially rejected an ineffective assistance claim.

Park took her claim of ineffective assistance of counsel to Stewart, the district attorney, hoping to get a green light before taking it to court.

“Not only did he agree to not contest our filing on behalf of Fate but he agreed that Fate should receive credit for time served and be immediately released,” Park said. Stewart’s support not only bettered their chance of success — it also expedited Winslow’s release.

“The case was presented to the Judge as fait accompli, where both sides agree so the Judge should just grant what both sides agree on. Grant the post-conviction application, then sentence Fate to 12 years with credit for time served,” Park said. “And that is exactly what happened. “

On December 11, Deedee Kirkwood, a California activist who’s spent years advocating for Winslow, was shocked to get the following message from him: “Well Mrs. Deedee I talked to Jee Park today a legal call every thing she said was good no parole no paper,” he wrote. “Free as a bird she say. I will leave Wednesday at the most. Jee Park is going to set up a website for me with my daughter it will go threw (sic) her so as soon it get done I will let you know … thank you so much for all your help you are a real angel.”

Kirkwood held her hopes in check. “I didn’t let myself believe it was for real because there were so many people coming forward over the years claiming to free him that I didn’t want to get my hopes up again,” she told The Intercept. “I was holding my breath until I saw the photo of him with that huge grin eating at the fast food restaurant,” she said. “I laughed and cried tears of joy.”

When Winslow found out he’d be getting out after all, he could hardly believe it.

“It was like the whole world changed,” he said. What he’s looking forward to most of all is spending the holidays with his family and meeting his 9-year-old grandson for the first time.

“I’m doing my best to stay focused,” he said. “Do it right this time.”