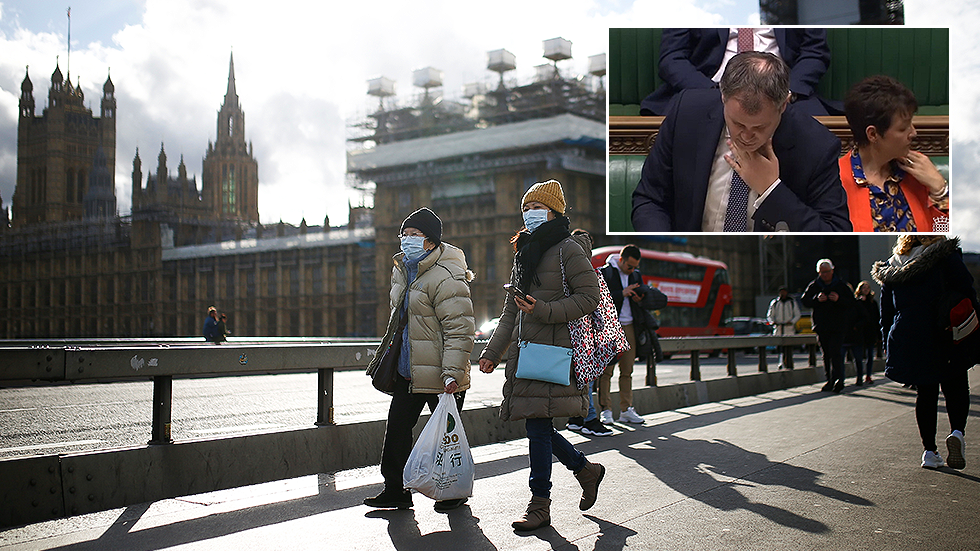 Footage of a UK health minister coughing and wiping his nose in the House of Commons has provoked anger online after it emerged he’d been placed into self-isolation after dining with MP Nadine Dorries – diagnosed with coronavirus.

Six MPs have now self-isolated as fears grow that Covid-19 is spreading throughout the Houses of Parliament in Westminster. Mental Health Minister Nadine Dorries revealed on Tuesday evening that she had contracted the deadly virus and now a second health minister, Edward Argar, was placed into self-isolation on Wednesday.

It comes just 24 hours after Argar was seen coughing, reaching for his throat and continually wiping his nose as he struggled at the dispatch box while addressing lawmakers in the House of Commons.

It prompted an angry response on Twitter with many suggesting the health minister wasn’t taking his own government’s advice on how to tackle and minimize the impact of Covid-19.

One person tweeted: “How can we trust these people to keep *us* safe?” While another mocked: “Remind us of the government advocating about not touching one’s face.” Gifs perfectly emphasizing this point were also posted.

Argar isn’t the first minister to feel the wrath of the public, after Foreign Secretary Dominic Raab was also caught not keeping to official coronavirus guidance during Chancellor Rishi Sunak’s budget address in parliament on Wednesday.

Transport Secretary Grant Shapps could be seen looking daggers at Raab across the front benches as the foreign secretary repeatedly spluttered into his hand, contrary to all public health organization warnings about best practices during the ongoing global outbreak.

The UK had 456 coronavirus cases and eight deaths linked to the virus as of Wednesday evening. PM Boris Johnson is scheduled to chair another emergency COBRA meeting on Thursday as the UK battles the virus outbreak.

Also on rt.com What happened to catch it, kill it? Dominic Raab goes VIRAL for UK parliament coughing antics