On Saturday, caucusgoers began gathering around 10 a.m. at the Desert Pines High School in Las Vegas, Nevada. It had…

On Saturday, caucusgoers began gathering around 10 a.m. at the Desert Pines High School in Las Vegas, Nevada. It had started raining early in the morning — a rare occurrence in Las Vegas — and didn’t lighten up until it stopped in the early afternoon.

The high school, whose mascot is a jaguar, is located in a predominantly Latino, working-class neighborhood. Almost all the caucusgoers were people of color. The school served as the caucus site for 12 precincts — divided between the cafeteria and the gym. None of the caucuses were very crowded; a precinct chair guessed it was due to the heavy rainstorm earlier that morning — giant puddles spotted the courtyard — and huge early voter turnout, with some 75,000 votes across the state coming early, compared with a total 86,000 people who caucused in 2016.

After the debacle of the Iowa caucuses, observers looked to Nevada with trepidation, but Sanders’s campaign remained focused on its major strategy of mobilizing Latino voters, who comprise nearly 30 percent of the state’s population. In the polls leading up to the caucuses, Sanders not only had an overall lead, he was also the candidate with the greatest share of Latino support, at 33 percent. While Sanders’s polling numbers had remained consistent since the summer, he benefited from a slip by former Vice President Joe Biden, who was leading among Latino Nevadans at 34 percent in June, but fell to 22 percent support this month. In 2016, Sanders received 53 percent of the Latino vote in Nevada. 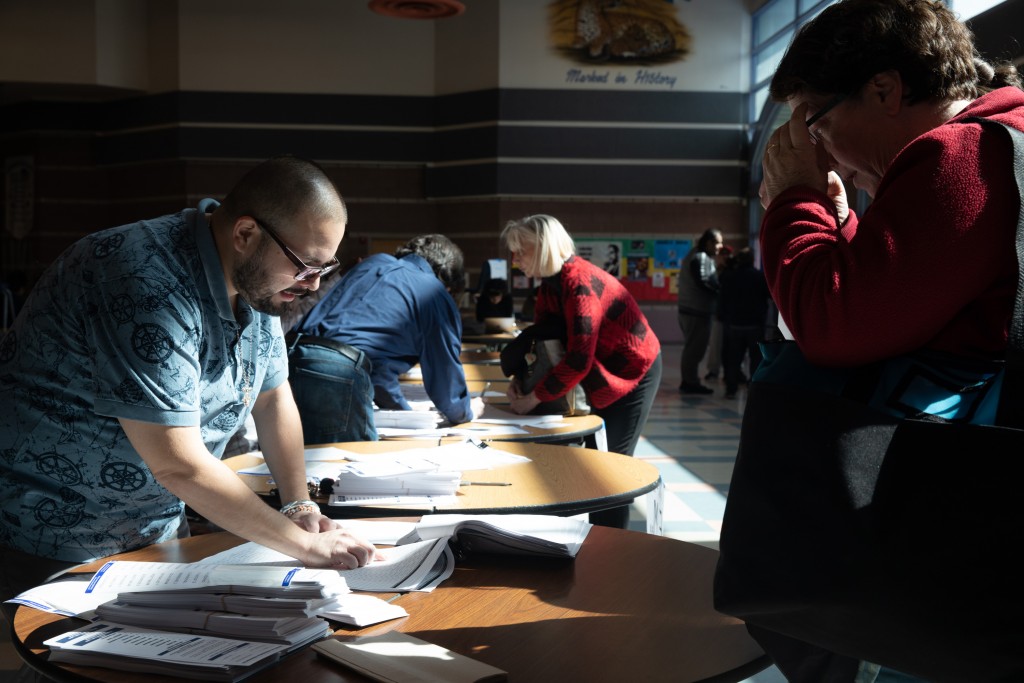 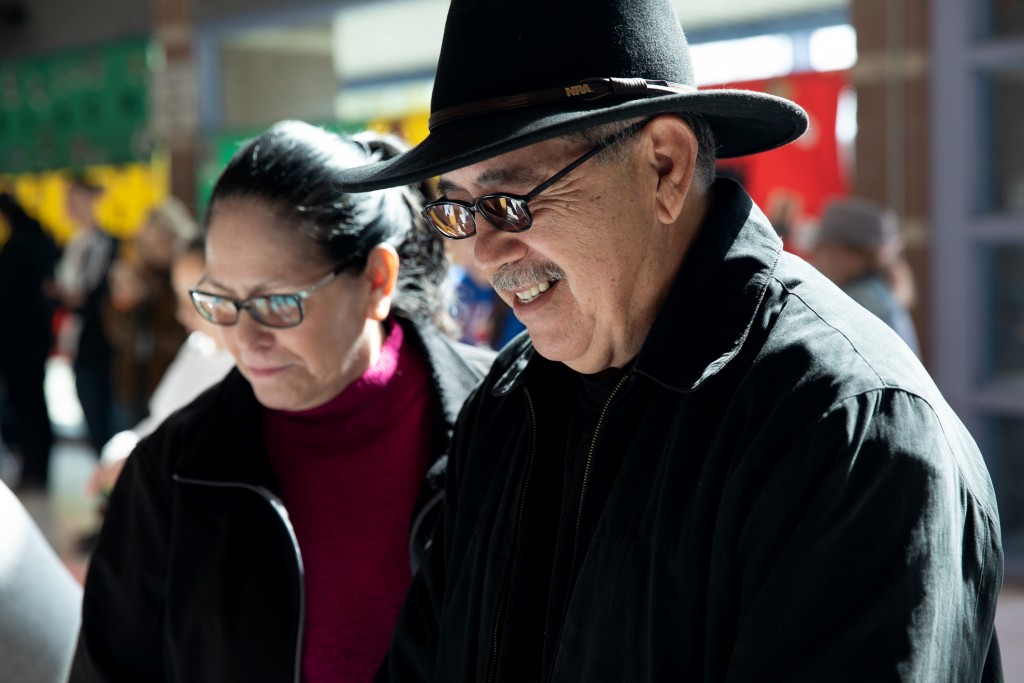 Voters, including Dan and Elvia Baca, check in for the Nevada Democratic Party caucuses at Desert Pines High School in Las Vegas on Feb. 22, 2020.Photos: Krystal Ramirez for The Intercept

This year, Sanders redoubled his efforts to win their votes, not only focusing on turn out, but also organizing specifically for the caucuses. Those efforts — such as holding trainings in Spanish and providing translation services at the caucuses — appear to have paid off. One such training — for the “Strip” caucuses that take place on Las Vegas’s famous main drag so hotel and casino workers can attend — took place Thursday night at the offices of Make the Road Action, an immigrant-rights group. Conducted entirely in Spanish, a young volunteer explained what a caucus is and how it works. The group concluded the training with a mock caucus, where they voted between prominent Sanders surrogates such as rappers Cardi B and Killer Mike.

In his victory speech from San Antonio, Texas, Sanders highlighted the support his campaign got from the group. “I wanna thank Make the Road and all of the grassroots organizations that helped us win there,” he said.

Sanders’s win is also thanks to young Latinos like 19-year-old Christopher Santoyo, who told The Intercept he’s been volunteering for Sanders since he was 15, and worked to convince his family to caucus for the candidate.

“At first they actually didn’t like him,” Santoyo said. “But I think based off the fact that I’ve been so involved in his campaign, and I’m directly reaching out to them telling them to vote, they’re supporting Bernie Sanders.” He walked some of his family into early voting locations and said he had elder relatives from coast to coast now supporting Sanders. 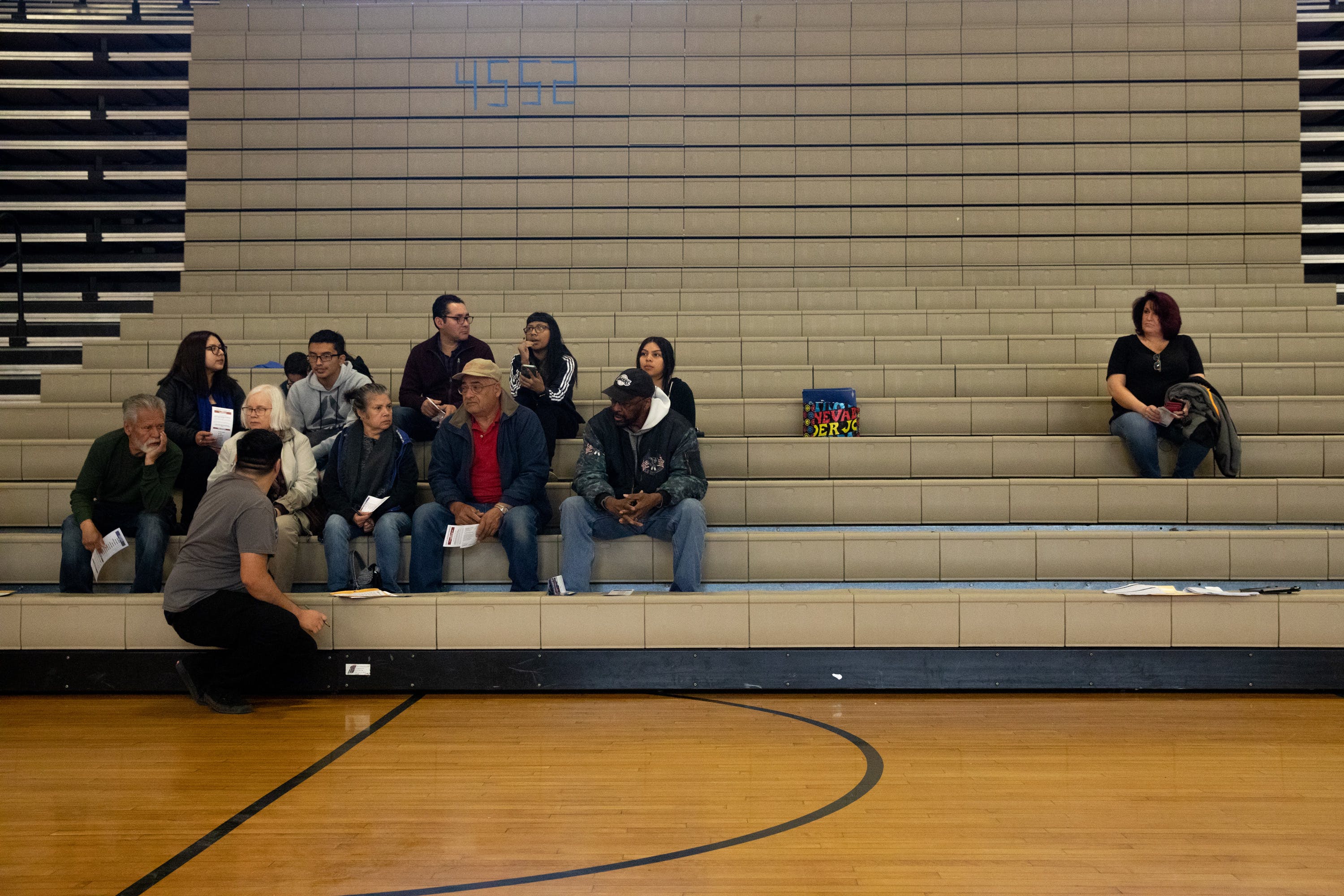 Voters wait for the tally at the caucus at Desert Pines High School in Las Vegas. Sanders supporters are gathered on the left, while on the right was the sole supporter for Tulsi Gabbard.

Photo: Krystal Ramirez for The Intercept

When asked whether he thought other young people are convincing their parents to vote Sanders, Santoyo said, “One hundred percent.”

“I think, like these ideas are so radical to them. Like free college, or a Green New Deal, Medicare for All. And then when you actually have a serious conversation as to seeing it through our lens, they really start to change.”

“A lot of them, especially my family specifically, they’re Latino so they listen to Telemundo, Univisión, and more corporate media. And they kind of echo those talking points. But when I fight back on it, they’re like, ‘Oh wow, you’re right,’” Santoyo said. “If you really speak to them, their mind will change.”

While cable networks were wrapping their heads around Sanders’s lead (Chris Matthews compared Sanders’s win to France’s invasion by the Nazi army on MSNBC), the mood at the actual caucuses was one of hope.

Belén Sisa, the Latino press secretary for Bernie Sanders, and Ana Maria Archila, the co-executive director of the Center for Popular Democracy, whose political arm endorsed Sanders, both teared up on the sidelines at Desert Pines as the majority of caucusgoers at one of the precincts huddled for Sanders.

“There are like a vast majority of people sitting in the Bernie side of the caucus,” Archila told me. “Brown people, mostly, who believe that a new world is possible, that it is entirely within our reach to have health care and free college and to end deportations and I’m so moved by the hopefulness of people in a moment of so much darkness, and that’s why I’m crying.”

For Pablo Montoya, 28, a first-generation Mexican-American and the first of his family to vote, the caucus was an opportunity to represent the entire Latino community. “Basically what I’m trying to do as well is to give a voice to the Latino population as well,” he said, “to the Dreamers, to DACA.” Montoya supports Sanders with Massachusetts Sen. Elizabeth Warren as his second choice.

Montoya wants to remake the Democratic Party — and he’s optimistic about the outcome in Nevada. “Basically, I’m focusing my choices right now for the people who are more focused on helping millennials at the moment,” he said, dismissing other candidates like Biden as the party’s past. “I think Bernie and Warren are ready to start a new Democratic Party, with new beliefs, with a new set of rules. And I really think we’re at a point where we can make that happen.”

How the CIA, Mossad and “the Epstein Network” are Exploiting Mass Shootings to Create an Orwellian Nightmare

In the Face of Rising White Supremacist Violence, Police Continue to Investigate Victims and Activists

Candidates, Your Views on the Middle East? You Have 30 Seconds.