The author of an article published in the Jewish-American press about anti-Semitic attacks in Ukraine has pushed back against progressive heartthrob Howard Dean, who suggested that the piece was inspired by Russian propaganda.

Lev Golinkin wrote an open letter to Dean – former six-term governor of Vermont and Chair of the Democratic National Committee – after he speculated on Twitter about Golinkin’s article, ‘Violent Anti-Semitism Is Gripping Ukraine — And The Government Is Standing Idly By,’ which was published by prominent Jewish-American outlet The Forward.

“Be interested to know if this is based on Russian disinformation,” Dean tweeted on June 24, in response to Golinkin’s piece.

Golinkin, who is Jewish, addressed Dean’s cynical insinuation in a letter published by The Forward two days later. He stressed that his article was published by a reputable Western media outlet and not a Russian one. He also claimed that, as a child refugee from the Soviet Union, he harbored little sympathy for the Kremlin. 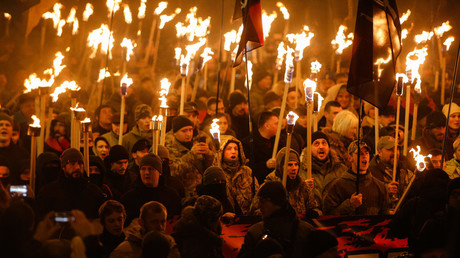 “The next logical step would’ve been to look at the article, which contains 58 links to stories by established Western media, including Reuters, the New York Times, and US-funded Radio Free Europe; statements from Amnesty International and the Anti-Defamation League; a video from the World Jewish Congress; a report from the Israeli government; and a press release from the president of Ukraine acknowledging the existence of anti-Semitism in his own country.”

He then theorized that Dean had made his comment because highlighting right-wing vandalism, intimidation and violence in Ukraine was inconvenient to American foreign policy, which is obviously unacceptable.

“I like puppies and rainbows as much as everyone else; the reason I choose not to ignore neo-Nazis, however, is because, well, they’re neo-Nazis, and ignoring neo-Nazis doesn’t work,” Golinkin wrote. “Indeed, it has reached the point where US-funded Radio Free Europe — certainly not an arm of the Kremlin — is now filing regular reports about Roma pogroms and neo-Nazi street gangs, some of which are supported by the government — the very government we’re giving billions to.”

Although he sharply criticized Russian media for covering anything bad that’s happening in America, while “suppressing and ridiculing coverage of horrible things perpetuated by Moscow and its allies,” Golinkin said that “did Russia cover this?” should not be “a litmus test for what’s allowed to be discussed in American media.”