A week after the disastrous G7 summit wrapped up in Canada, EU officials have leaked behind-the-scenes quotes from Donald Trump,…

A week after the disastrous G7 summit wrapped up in Canada, EU officials have leaked behind-the-scenes quotes from Donald Trump, giving insight into the bombastic, forthright style he deployed with other leaders.

US President Donald Trump arrived late, departed early, and made a show of his truculence throughout the Quebec meeting, due to the trade disputes between America and the other Western states. 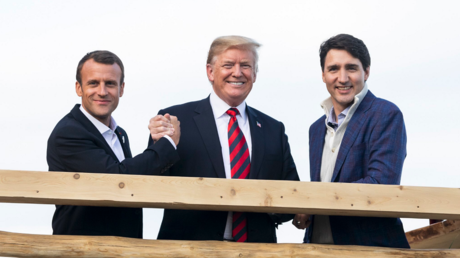 According to the Wall Street Journal, which spoke to a senior EU source, Trump was aware of his isolation, and at one point – when he finally agreed on an issue with Japanese Prime Minister Shinzo Abe – the US leader joked “Oh, well, then it’s five versus two.”

But Trump shared his worldview generously with both allies and rivals during the two-day summit. “Shinzo, you don’t have this problem, but I can send you 25 million Mexicans and you’ll be out of office very soon,” Trump told Abe to illustrate the battle he was facing against illegal migration.

During a debate on terrorism and Iran, the US president turned to his French counterpart, Emmanuel Macron, and said, “You must know about this, Emmanuel, because all the terrorists are in Paris.”

Earlier reports also indicated that Trump took to referring to Jean-Claude Juncker, the EU commissioner, as a “brutal killer,” due to his anti-trust campaigns against expanding US corporations.

“I think he meant it as a compliment, but I’m not so sure,” Juncker said on Thursday.

Trump’s deliberately petulant tactics – he even refused to sign the final communiqué – seemed to dismay and bamboozle the other heads of state, but their effectiveness has not been verified. Particular damage appeared to be reserved for Canadian Prime Minister Justin Trudeau, who Trump called “weak” and “very dishonest” over his stance on tariffs for American goods, but who has not backed down.

I have a great relationship with Angela Merkel of Germany, but the Fake News Media only shows the bad photos (implying anger) of negotiating an agreement – where I am asking for things that no other American President would ask for! pic.twitter.com/Ib97nN5HZt

“The mood really changed after the G-7,” the EU official said.