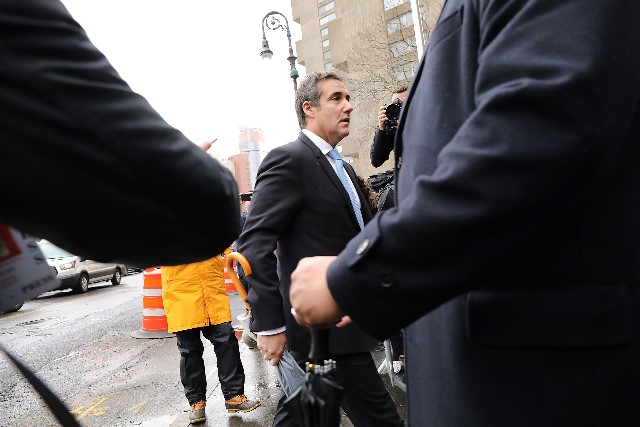 Speculation has begun to grow that Michael Cohen, Trump’s long-time personal attorney whose office and home were raided by the FBI, may agree to cooperate with Robert Mueller’s investigation. If so, he could go down in history with Salvatore “Sammy the Bull” Gravano, the mobster whose testimony ultimately destroyed the Gotti crime family.

The Schofield Kid: Yeah, well, I guess they had it coming.

William Munny: We all have it coming, Kid.

When your current lawyer has his home and office plundered of all paperwork by FBI agents bearing judge-certified warrants, and your old lawyer tells you your current lawyer is almost certainly going to give you up to the feds to save himself, you are having a bad day.

This is precisely the predicament Mr. Trump finds himself in, according to his old attorney, Jay Goldberg, who represented Trump’s interests for many years. In an interview with CBS News, Goldberg said he was all but certain Michael Cohen would flip under the intense legal pressure being brought to bear upon him.

In a comparison that should chill Trump to the bone, Goldberg likened Cohen to Salvatore “Sammy the Bull” Gravano, the notorious mobster whose eventual testimony and cooperation with federal authorities ultimately obliterated the John Gotti crime family.

“There is virtually no chance that Cohen would not try to win the affection and cooperation of the US Attorney,” Goldberg told CBS, “and thus, he would like all other persons accused of crime, where the penalty is substantial, he would give support for the government’s version of the facts.”

Goldberg made similar statements in an earlier conversation with the Wall Street Journal, which reported, “Mr. Goldberg said he cautioned the president not to trust Mr. Cohen. On a scale of 100 to 1, where 100 is fully protecting the president, Mr. Cohen ‘isn’t even a 1,’ he said he told Mr. Trump … ‘Michael will never stand up [for you]’ if charged by the government.”

Alan Dershowitz, famed attorney and Trump’s new bestie, is of a similar mind regarding Cohen. “That’s what they’ll threaten him with: life imprisonment,” Dershowitz told Politico. “They’re going to threaten him with a long prison term and try to turn him into a canary that sings.”

Possible signs of a ripple effect from the Cohen raid are already beginning to show. Out of nowhere, the National Enquirer and its parent company American Media Inc. (AMI) reached a settlement with former Playboy model Karen McDougal in a long-running suit over the rights to her story of an affair with Donald Trump.

Among the Cohen documents seized by the FBI were papers pertaining to AMI and the McDougal suit. “McDougal’s lawsuit did not name Cohen as a defendant,” reports the Washington Post, “but it did allege that Trump’s personal lawyer colluded with AMI to effectively silence her by buying the rights to her story and then declining to run it.”

The terms of the settlement were profoundly favorable to McDougal: She can talk all she wants now about what went down with The Donald a decade ago, and only has to share 10 percent of whatever profits she makes from the telling with AMI. Those seized documents may very well have proved her side of the story, prompting the settlement.

Cohen has also abruptly abandoned his own lawsuit against BuzzFeed and Fusion GPS. He brought suit against them after they published an unredacted version of the so-called “Steele Dossier,” the explosive document that details Trump’s alleged associations with shady Russian operators. That dossier also contained a description of the now-notorious “Pee Tapes” that allegedly show Trump asking prostitutes to urinate on a bed once shared by Barack and Michelle Obama.

No concrete reason was given for dropping the case. “Given the events that have unfolded,” said Cohen’s attorney David Schwartz, “and the time, attention, and resources needed to prosecute these matters, we have dismissed the matters, despite their merits.” One can only assume that “the events that have unfolded” refers to the FBI’s plundering of Cohen’s client files.

So that’s one Cohen cat out of the bag, and maybe another. How many more will follow?

It is not too far a stretch to imagine Donald Trump losing what remains of his tattered equilibrium as the legal footsteps march closer and closer to his door. Michael Cohen was Trump’s personal attorney, privy to all the secrets of the realm. If Cohen does what many in Trump’s orbit fear he will and takes whatever ride Mueller offers, the rain is going to come down hard and fast for all involved. Cohen was directly involved in the Trump Organization’s international business dealings, and a fair portion of those dealings were with the kind of shady characters that make a prosecutor’s mouth water.

Worst of all for Trump, a Cohen flip puts his kids on the firing line. “Cohen, Donald Jr. and Ivanka were essentially the Trump Organization’s entire global development team when the company was shaking hands with questionable business partners around the world,” reports Eric Lach of The New Yorker. “If Cohen were to cooperate with investigators, they would surely ask him about Trump’s children.” If all the rumors are true, nothing gets the bats in Trump’s belfry more agitated than a perceived threat to his progeny.

Trump’s ebbing fan base can rest easy, though. His legal team made a change, and former New York City mayor and terrible presidential candidate Rudy Giuliani has joined the cause. One can only imagine the fine legal prowess he will bring to the fray. I can hear him now, arguing with the judge: “Your Honor, I can only say that my client is a good man who was there on September 11 just like me, and we all know how bad September 11 was, because September 11 and September 11.”

Michael Cohen has some serious thinking to do. At the moment, he is tied tight to the rails with the Mueller Express highballing down the track. His options are binary: Hop on board or get run over. If Robert Mueller shows him the evidence he has along with a list of all the others who have chosen to cooperate — maybe Michael Flynn, maybe Paul Manafort, maybe who knows who else — his decision gets a whole lot simpler. As Rick Wilson noted last week, “Trump isn’t exactly known for paying his bills in the first place.” Loyalty is what loyalty does.

We shall see. Get ready for a long, hot summer.