Spread the love Across the country, statues are coming down. Many of these removals started with statues of confederate soldiers… 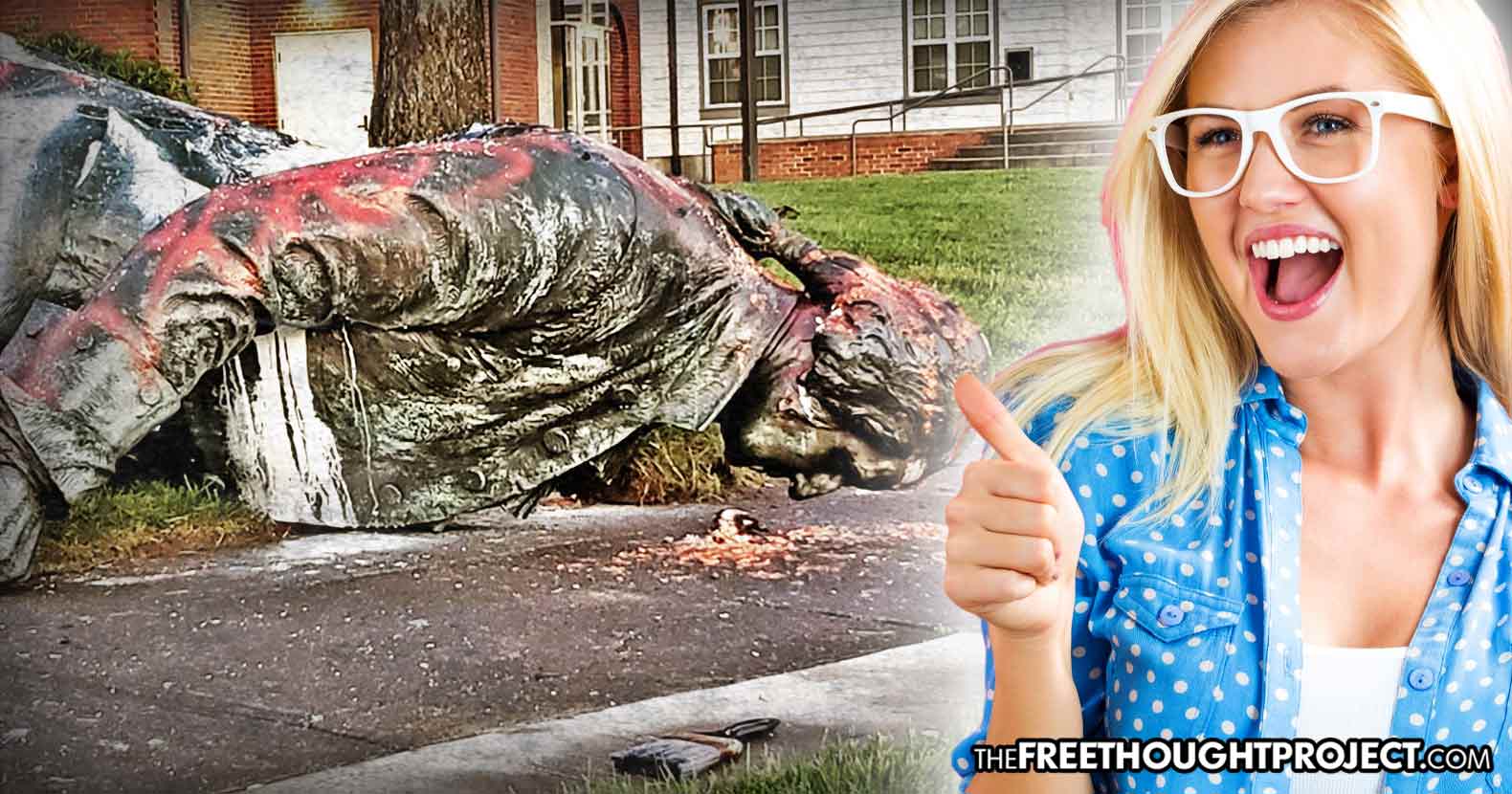 Across the country, statues are coming down. Many of these removals started with statues of confederate soldiers and controversial figures but it has since morphed into the removal of statues of the country’s presidents. After watching the statues getting toppled across the country, corporate brands from around the world began virtue signaling by jumping to erase their products with controversial histories. Hell, even the band formally known as “The Dixie Chicks” changed their name to “The Chicks” to signal to the world that they do not support slavery — because we all thought the did, right?

It has been a veritable kumbaya moment of coming together to end racism — but that is not exactly what’s happening is it?

Instead of bringing systemic racism to an end through the removal of statues and the changing of brands, these moves made people more defensive — up to and including the commander in chief, Donald Trump — who called for throwing people in jail for ten years if they destroy another statue. The blowhard president even advocated for the kidnapping and caging of people for their free speech over the constitutionally protected act of burning a flag.

A promise of state violence was likely not the intended desire many folks had when they took to removing shrines to racist tyrants. Unfortunately, however, that’s all we’ve seen.

Tearing down statues has led to the opposite of its intended effect. Many on the right have gone on the defensive and even the president wants to use violence against those who challenge his threats. This should come as no surprise, however, as violence is the language of the state.

As John Lennon famously stated, “When it gets down to having to use violence, then you are playing the system’s game. The establishment will irritate you – pull your beard, flick your face – to make you fight. Because once they’ve got you violent, then they know how to handle you.”

Watching people wage violence against their fellow human in the name of protecting or tearing down some arbitrary government artifact is as disheartening as it is frustrating. The future cannot be changed by attempting to erase the past as those who do not remember their history are destined to repeat it.

If tearing down statues actually has an effect, why aren’t we tearing down statues of George W. Bush or Barack Obama to end wars? Along with Donald Trump, these two former presidents and one current one all have the blood of millions of brown people on their hands left there by waging and maintaining endless wars in the Middle East. Where is that outrage?

How have we not learned that you can’t end racism by yanking down a confederate statue just like you can end US imperialism by removing a George W. Bush statue? One possible reason is that we’ve all been distracted by party lines and bickered over irrelevant talking points instead of talking about and demanding actual solutions.

If I were the establishment, I would be ecstatic that people are focusing on removing statues. It keeps the masses pacified talking about stone and metal while ignoring real solutions like ending the drug war, qualified immunity, & police for profit. Well played govt, well played

A statue holds no magical power to make people racists. If anything, the monuments to former racists serve as reminders that the state can and always will be open to the influence of bigotry. This is a telling reminder given the fact that only the state has the power to legally enforce said bigotry.

Racist government laws were brought to an end because people refused to obey them. Had Rosa Parks used her time and energy climbing up to the top of statues instead of disobeying a racist law, rest assured Browder v. Gayle, which ruled that segregated buses were unconstitutional, would’ve never happened until much later.

Had the Civil Rights Movement in the 1950s not organized the Montgomery Bus Boycott, rest assured, desegregation would’ve taken much longer.

Society has the amazing ability to force positive change through nonviolent and nondestructive means. However, all too often, we let emotions rule our thoughts and take to yelling and fighting in the streets and destroying property. This only serves to create more divide and empower the ranks of the racists and the police state.

If we really want to put the brakes on a racist system, we cannot play on the same field as the racist who have no problem using violence as a means to an ends. We have to think outside the box. Had Harriet Tubman attempted to free slaves by going head to head with slave owners, rest assured, this would’ve played out much different.

Boycotts, refusal of service, shaming, exposing — these are the tools we as citizens have against other citizens who are spreading hate and racism. Their ideas are easily defeated and we can observe this throughout society already. Open and overt racism has no place in a free society. No one says, “man I really hate black people,” and then gets a free coffee at Starbucks. It just doesn’t happen.

But what do we do when the state is perpetuating it and prolonging the suffering of minorities through systemic racism? Again, the answer to that question is not to tear down a statue, but to realize where the power of this racism rests.

In America, the area of government that is most responsible for maintaining a racist system, allowing racist actors to oppress their targets with impunity, and perpetuating the suffering and plight of millions through the persecution of morally innocent individuals — is the war on drugs, and predatory policing used to uphold that war.

Without a doubt, the war on drugs fuels the racist system by targeting minorities and the poor. It serves to increase interactions between police—who are often caught joining the force to act out their racist desires—and the citizens.

The drug war, from the police departments to the court systems, unequivocally targets and punishes minorities harder for the same victimless crimes for which their white counterparts receive slaps on the wrist.

As TFTP reported, a scathing report in Harper’s Magazine, written by Dan Baum set the record straight and relieved all doubt over the intentions of the drug war. John Daniel Ehrlichman, counsel and domestic policy chief to President Richard Nixon, came clean on the real reason behind the war on drugs — to criminalize blacks and hippies.

According to Baum, he tracked down Ehrlichman in 1994 at his engineering firm in Atlanta, Georgia.

“You want to know what this was really all about?” Ehrlichman bluntly asked Baum of the war on drugs. “The Nixon campaign in 1968, and the Nixon White House after that, had two enemies: the antiwar left and black people. You understand what I’m saying? We knew we couldn’t make it illegal to be either against the war or black, but by getting the public to associate the hippies with marijuana and blacks with heroin, and then criminalizing both heavily, we could disrupt those communities. We could arrest their leaders, raid their homes, break up their meetings, and vilify them night after night on the evening news. Did we know we were lying about the drugs? Of course we did.”

To this day, the racist intentions behind the war on drugs serve to further oppress black communities. The war on drugs is still creating criminals out of otherwise innocent individuals who’re caught in possession of arbitrary substances, removing their opportunity for employment by giving them criminal records, and guaranteeing a difficult future within the working class. All the while, arbitrary “offenses” like jaywalking continue to be used to target minorities so cops can wage fishing expeditions to see if a person may be in possession of an illegal substance.

It is no coincidence that the ACLU refers to the drug war as the new Jim Crow.

The war on drugs subjects the United States to much of the same harm, with much of the same economic and ideological underpinnings, as slavery itself. Just as Jim Crow responded to emancipation by rolling back many of the newly gained rights of African-Americans, the drug war is again replicating the institutions and repressions of the plantation. And like slavery and Jim Crow, the drug war garners appalling levels of support. Each has its own rhetoric, each its own claims to unassailable legitimacy. The brutality of slavery was justified on economic and paternalistic grounds. Jim Crow pretended that separate but equal treatment sufficed, even as blacks faced daily lynchings and every form of overt discrimination. The drug war claims morality and protection of children as its goals, while turning a blind eye to the racial injustice it promotes. And with all three systems of oppression, much of society sits idly by, accepting the rhetoric that later will seem so unbelievably corrupt. We will one day understand that the war on drugs was a war on people and communities.

If we really want to deal a blow to this racist system we must strike the root. The drug war is one such root. Until we eliminate the cause of this strife, tearing down all the statues in the world will do nothing. Until we realize that we are financing our own oppression and refuse to support the government programs that keep us in the days of Jim Crow, the tyranny will remain.

It is high time we realize this real solution to this real problem before the entire country is so divided that we enter a new American civil war.