Photo illustration: Soohee Cho/The Intercept, Getty Images It’s become clear to anyone with a pulse that President Donald Trump is… 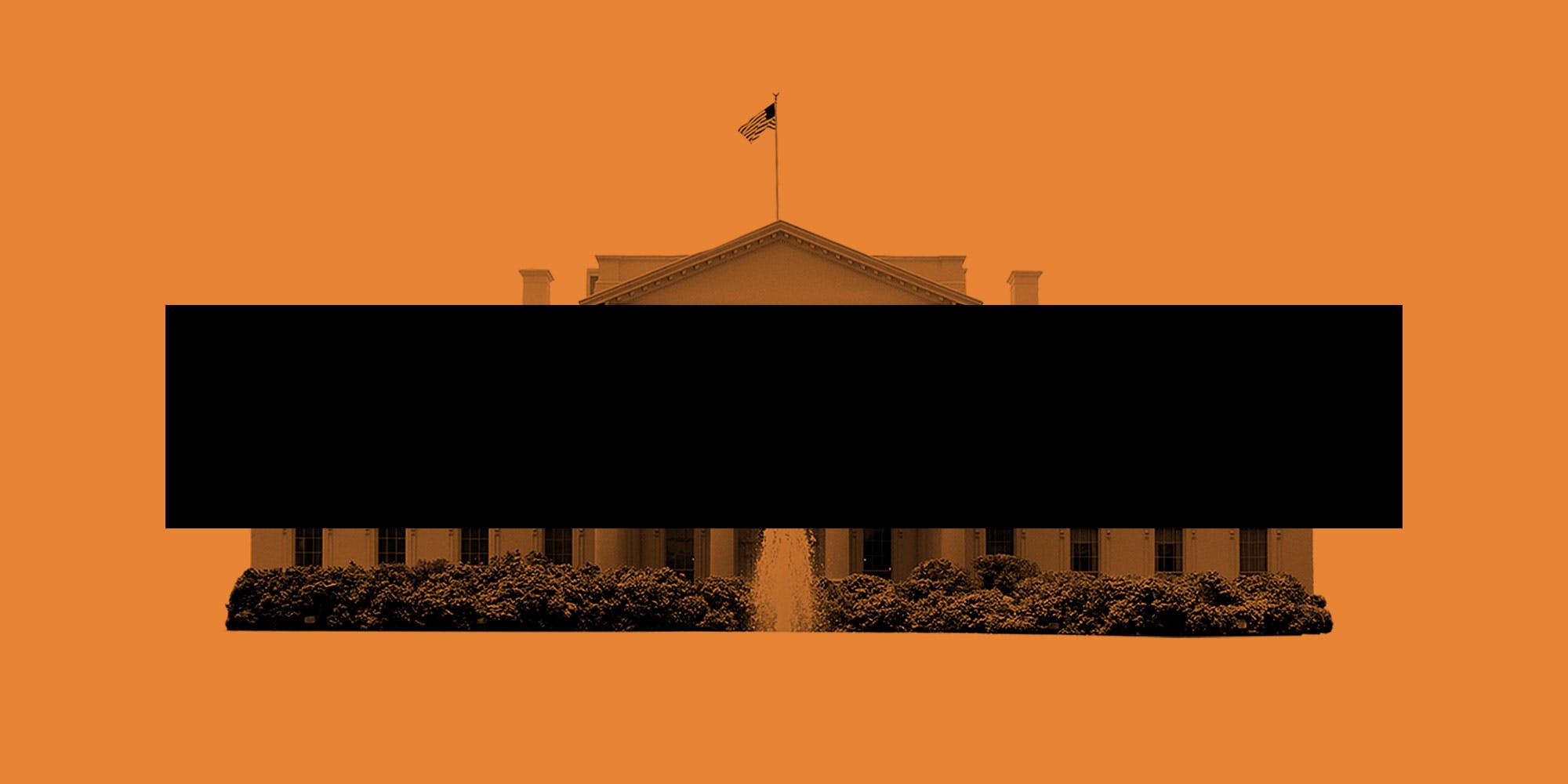 It’s become clear to anyone with a pulse that President Donald Trump is exploiting the classification system that compartmentalizes secret information within the government. So far, the past several weeks have seen stories about the administration using the classification system to hide embarrassing or potentially illegal conversations Trump had with foreign leaders.

Last week, there was another possible abuse of the classification system at hand: We learned that the Trump administration may be using the system to punish his political rivals — specifically Hillary Clinton, as well as her staff and associates — in an apparent bid to distract from the president’s political woes.

House Democrats are rightly focusing on impeachment, but it’s imperative that they also take up legislation focusing on abuse of the secrecy system. Trump is merely providing several acute examples of the dangers of abusing government secrets, but the classification system had done incalculable damage to our democracy long before he assumed the Oval Office.

After the whistleblower complaint about Trump’s call with the president of Ukraine was made public, we learned that the White House placed notes from conversations with other foreign leaders in a “code-word” computer system meant for highly classified national security information. The motive is obvious: to hide the conversations from all but a small circle of high-ranking White House staffers.

“White House officials are bound by Executive Orders governing the handling of classified materials,” Susan Hennessey, managing editor of the national security-focused website Lawfare, declared on Twitter last week. “This plainly violates the requirement that information not be classified to conceal crimes or avoid political embarrassment.” Clearly, many people were aghast that Trump is seemingly getting away with an unprecedented violation.

Trump is not an anomaly when it comes to abusing the classification system; he is the norm, just a particularly public and brazen personification of it.

Except, as Hennessey likely knows — she used to work in the intelligence community, as a lawyer for the National Security Agency — administrations of both parties going back decades have frequently over-classified information to hide illegal conduct, waste, fraud, abuse, and embarrassing facts. Trump is not an anomaly when it comes to abusing the classification system; he is the norm, just a particularly public and brazen personification of it.

Consider that no one is ever punished for the types of classification abuse prohibited by the executive order Hennessy pointed to. J. William Leonard, the U.S. government’s classification czar under President George W. Bush, has testified before Congress many times about the dysfunctional nature of the classification system. He told a House oversight panel in 2016 that while there are countless instances of government employees being harshly punished for leaking secret information, “to my knowledge no one has ever been held accountable and subjected to sanctions for abusing the classification system or for improperly classifying information.”

Leonard went on to say:

Everyone with a clearance knows that if he or she improperly discloses or otherwise mishandles information that should be classified, even inadvertently, he or she will be subject to sanction, perhaps even to criminal penalties. However, cleared individuals likewise know if they overclassify information, whether willfully or negligently, there will most likely be no personal consequences. Given this disparity, it’s no wonder that the attitude “when in doubt, classify” prevails, notwithstanding any admonition to the contrary.

The secrecy system is beyond dysfunctional; it’s a farce. Even former NSA and CIA director Michael Hayden once made a stunning admission: “Everything’s secret. I mean, I got an email saying, ‘Merry Christmas.’ It carried a Top Secret NSA classification marking.”

Examples of this over-classification are far too prolific to list, but here are just a few that relate to oversight of the executive branch and whistleblowers in recent years.

In 2015, the Pentagon completed a partial audit of its finances. The report, which only looked at a portion of Pentagon spending, found more than $ 125 billion in waste. When officials feared that it would be used to slash the Pentagon’s budget, they promptly suppressed the study and classified the underlying data in the report, “which ensured no one could replicate the findings,” according to the Washington Post.

In 2010, the Justice Department attempted to prosecute NSA whistleblower Thomas Drake under the Espionage Act for allegedly leaking information to journalists after he was stifled when going through the government’s internal whistleblower process. At the center of the case was an unclassified document in Drake’s possession that contained completely innocuous government talking points: It discussed “what a success” the NSA’s surveillance program was. When it was found in his possession, the government retroactively classified it and charged him for possessing it. Thankfully, the case fell apart on the eve of the trial. The judge ended up calling the government’s behavior in the case “unconscionable,” but it didn’t stop the case from ruining Drake’s career. No one — besides Drake — faced any sanctions.

Retroactive classification is a particularly pernicious form of abuse. The government has used it endless times to pull unclassified information into the secrecy regime — sometimes information that has been in the public domain for years.

That’s what the Trump administration did when, amid all the impeachment headlines, it reopened an investigation into several of Clinton’s aides from her State Department days. The targets of the investigations were recently “notified that emails they sent years ago have been retroactively classified and now constitute potential security violations,” according to the Washington Post.

Clinton left the government in 2013, so the information contained in those emails is — at a minimum — over 5 years old. Again, while this case seems particularly spiteful, other examples of dubious retroactive classification decisions can fill a 60-page law review article.

Instead of reforming the system to make sure that abuses are more easily punished, the only bill Congress has taken up would expand the classification regime.

In 2016, Clinton decided not to go on the offensive about the secrecy system that was helping to derail her campaign, and it was a huge missed opportunity to point out to the American public that the government often uses its classification stamp in all sorts of malicious ways.

Now, Congress is moving in the opposite direction. Instead of reforming the system to make sure this type of abuse is more easily punished, the only bill Congress has recently taken up related to government secrecy would expand the classification regime — even potentially making it a crime for journalists to publish information about CIA officers who have engaged in torture.

With bipartisan support, Congress recently passed updated language to the Intelligence Identities Protection Act in an intelligence community funding bill. The provision, which dozens of transparency and open government organizations protested as a direct threat to press freedom, would make it a crime for anyone to publish the name of a covert CIA officer at any time, for any reason — even if they were committing crimes. The author of the provision, Rep. Adam Schiff, D-Calif., who is now leading the charge against Trump in the Ukraine scandal, shamefully ignored the concerns of press freedom groups, even though he’s the chair of the “press freedom caucus” in the House.

There are too many egregious examples to list, but I touched on one in The Intercept last year. The story revolved around an “illegal animal killing” on CIA property. After BuzzFeed News’s Jason Leopold got wind of an Inspector General report on the subject, he filed a Freedom of Information Act request for more information. The CIA stonewalled and withheld the report on the incident, claiming that it would “harm national security” to release it. The excuse even covered disclosing the type of animal that was killed.

Leopold sued. Three years later, the government finally relented and revealed the animal in question: a deer. The rest of the report remains classified.

Activists Who Disrupted Biden in Detroit Back Sanders, But Dread Trump Most of All