More than 220 people have been killed and 843 injured after a tsunami hit coastal towns on Indonesia’s Sunda Strait,… 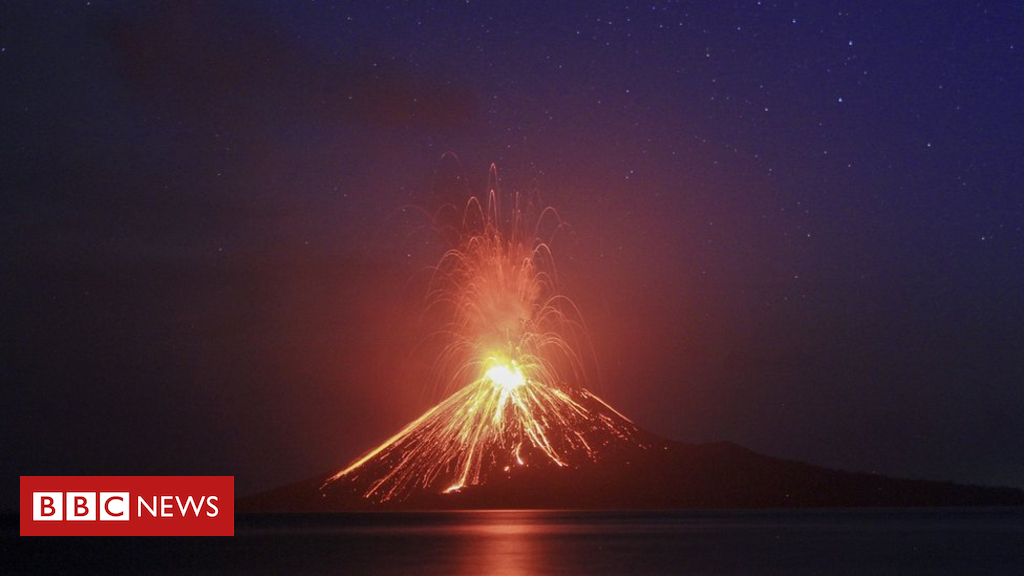 More than 220 people have been killed and 843 injured after a tsunami hit coastal towns on Indonesia’s Sunda Strait, government officials say.

The tsunami waves struck at night without any warning, destroying hundreds of buildings.

Officials say the tsunami may have been caused by undersea landslides after the Anak Krakatau volcano erupted.

The Sunda Strait, between the islands of Java and Sumatra, connects the Java Sea to the Indian Ocean.

What do we know so far?

The disaster management agency has warned people to stay away from the coastline due to fears of another tsunami.

It hit several popular tourist destinations including the Tanjung Lesung beach resort in the west of Java island.

Footage shared on social media showed a large wave crashing into a tent in the resort, in which popular Indonesian rock band Seventeen was performing. Members of the band were seen being swept away as the wave destroyed the stage.

In a tearful Instagram video, singer Riefian Fajarsyah said the band’s bassist and road manager had died, and three other band members and his own wife were missing.

A crew member, Zack, said he had survived by grabbing on to part of the stage and “in the final seconds [underwater] I almost ran out of breath”, Reuters news agency reports.

It appears that the main road into Pandeglang has been badly damaged, making it difficult for rescuers to reach the area, she added.

Eyewitness Asep Perangkat said cars and containers had been dragged about 10 metres (32 feet).

“Buildings on the edge of [Carita] beach were destroyed, trees and electricity poles fell to the ground,” he told AFP news agency.

Officials say more than 160 people were killed in Pandeglang – a popular tourist district on Java known for its beaches and national park.

Meanwhile, 48 were reported dead in South Lampung on Sumatra, and deaths were also reported in Serang district and Tanggamus on Sumatra. Officials fear the death toll could rise further.

So far, no foreign nationals have been reported dead, officials say.

‘There were two waves’

I was on the beach. I was alone, my family were sleeping in a room.

I was trying to photograph the erupting Krakatau volcano.

Earlier in the evening, there was quite heavy eruption activity. But just prior to the waves hitting the beach, there was no activity at all. It was just dark out there.

And suddenly I saw this wave coming, and I had to run.

There were two waves. The first wave wasn’t that strong – I could run from it.

I ran straight to the hotel, where my wife and my son were sleeping.

And I woke them up… and I heard a bigger wave coming. I looked out of the window when the second wave hit. It was much bigger.

The wave passed the hotel. Cars were pushed off the road.

We and other people at the hotel went straight to the forest (on higher ground) next to the hotel. And we’re still up on the hill now.

A spokesman at Indonesia’s disaster agency, Sutopo Purwo Nugroho, initially said the wave was not a tsunami, but a tidal surge, and told the public not to panic.

He later apologised for the mistake, saying there had been confusion because there was no earthquake.

“A tsunami siren in Labuhan Bay in Pandeglang regency started ringing all of a sudden, without any activation from the authorities,” Mr Nugroho said.

“There was possibly a technical error that made the sirens ring. Lots of people ran to save themselves… tsunami shelters are now packed.”

Indonesia’s geologic agency says the volcano erupted for two minutes and 12 seconds on Friday, creating an ash cloud that rose 400 metres above the mountain. It recommended that no-one be allowed within 2km (1.2 miles) of the crater.

The disaster management agency said high seas as a result of the full moon might also have contributed to the strength of the waves.

What caused the tsunami?

It is well known that volcanoes have the capacity to generate large waves. The mechanism as ever is the displacement of a large volume of water.

Except, unlike in a classic earthquake-driven tsunami in which the seafloor will thrust up or down, it seems an eruption event set in motion some kind of slide.

It is not clear at this stage whether part of the flank of the volcano has collapsed with material entering the sea and pushing water ahead of it, or if movement on the flank has triggered a rapid slump in sediment under the water surface.

The latter at this stage appears to be the emerging consensus, but the effect is the same – the water column is disturbed and waves propagate outwards.

How common are tsunamis in Indonesia?

Indonesia is prone to tsunamis because it lies on the Ring of Fire – the line of frequent earthquakes and volcanic eruptions that circles virtually the entire Pacific rim.

In September, more than 2,000 people died when a powerful earthquake struck just off the central Indonesian island of Sulawesi, setting off a tsunami that engulfed the coastal city of Palu.

On 26 December 2004, a series of huge waves triggered by a powerful earthquake in the Indian Ocean killed about 228,000 people in 13 countries, mostly in Indonesia.

However, tsunamis caused by volcanic activity like this are less frequent.

Anak Krakatau (Child of Krakatau) is a new island that emerged in 1927 from Krakatoa volcano.

In August 1883, Krakatoa underwent one of the most violent volcanic eruptions in recorded history: