Iran is facing “unprecedented” pressure from international sanctions, President Hassan Rouhani has said. Renewed US sanctions had led to worse… 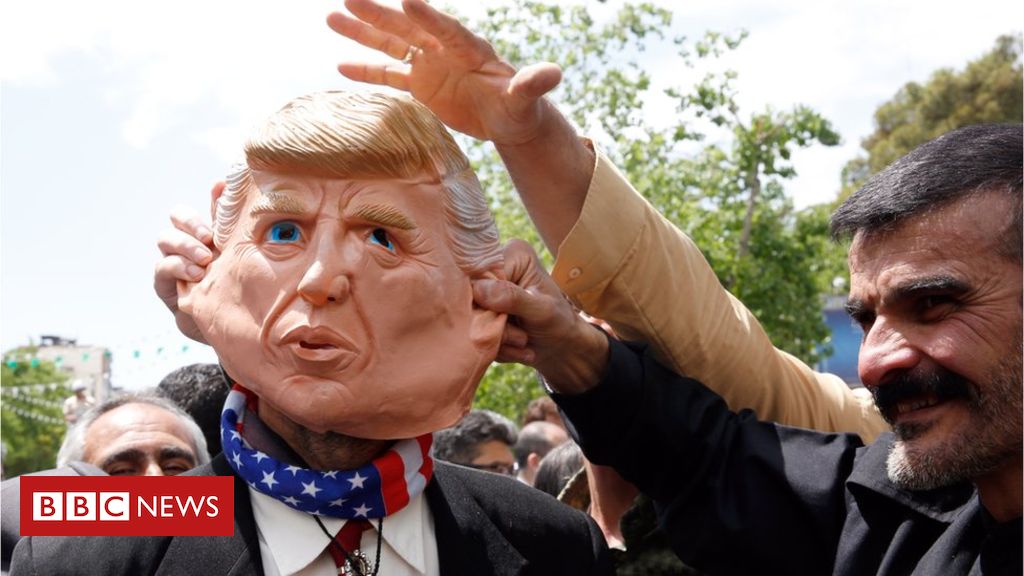 Renewed US sanctions had led to worse economic conditions than during the country’s 1980-88 war with neighbouring Iraq, Mr Rouhani said.

His comments came amid rising tensions with the US, which last week deployed warships and warplanes to the Gulf.

Mr Rouhani, who has come under domestic political pressure, called for political unity to face down sanctions.

“During the war we did not have a problem with our banks, oil sales or imports and exports, and there were only sanctions on arms purchases,” Mr Rouhani told political activists in the capital, Tehran.

“The pressures by enemies is a war unprecedented in the history of our Islamic revolution … but I do not despair and have great hope for the future and believe that we can move past these difficult conditions provided that we are united,” he said.

The US-Iran escalation has put into question the future of the landmark 2015 nuclear deal that Iran signed with the five permanent members of the UN Security Council and Germany.

US President Donald Trump last year unilaterally abandoned the deal and re-imposed sanctions – and Iran has indicated it may also resume nuclear activities if the other partners go along with American sanctions.

What pressures is Iran facing?

President Rouhani has personally come under pressure from hardliners in Iran after the US withdrawal from the nuclear deal his administration negotiated.

Under the accord, Iran had agreed to limit its sensitive nuclear activities and allow in international inspectors in return for sanctions relief.

US sanctions – particularly those on the energy, shipping and financial sectors – have hit oil exports and caused foreign investment to dry up.

The sanctions prevent US companies from trading with Iran directly and also with any foreign firms or countries that are dealing with Iran.

The International Monetary Fund has said it expects the Iranian economy to shrink by 6% in 2019.

However, that projection preceded another move by the US to tighten sanctions: the end to exemptions enjoyed by China, India, Japan, South Korea and Turkey, all five of which have been buying Iranian oil.

Iran has repeatedly threatened to retaliate to the US measures by blocking the Strait of Hormuz – through which about a fifth of all oil consumed globally pass.

What is the US doing?

The Trump administration hopes to compel Iran to negotiate a “new deal” that would cover not only its nuclear activities, but also its ballistic missile programme and what officials call its “malign behaviour” across the Middle East.

The US is sending a Patriot missile-defence system to the Middle East.

A US warship, USS Arlington, with amphibious vehicles and aircraft on board, is also joining the USS Abraham Lincoln strike group in the Gulf.

US B-52 bombers have arrived at a base in Qatar.

The US said the moves were a response to a possible threat to US forces in the region by Iran, without specifying. Iran dismissed the claim as nonsense.

A senior RG commander said that, if attacked, Iran could strike US forces.

“An aircraft carrier that has at least 40 to 50 planes on it and 6,000 forces gathered within it was a serious threat for us in the past but now… the threats have switched to opportunities,” Adm Amir Ali Hajizadeh said, according to Iranian news agency Isna.

“If [the Americans] make a move we will hit them in the head,” he said.

There are about 5,200 US troops currently deployed in neighbouring Iraq.

Earlier this week Iran announced that it had suspended two commitments under the nuclear accord. It also threatened to step up uranium enrichment if it was not shielded from the sanctions’ effects within 60 days.

European powers said they remained committed to the Iran nuclear deal but that they “reject any ultimatums” from Tehran to prevent its collapse.

Theodore Roosevelt statue to be removed by New York museum