Iranian forces launched more than a dozen ballistic missiles against two military bases housing US troops in Iraq early hours of Wednesday morning. The al-Assad airbase in western Iraq was hit by 17 missiles, and 5 targeted at a base in the northern Iraqi city of Erbil.  No US casualties were immediately reported.

Iran’s supreme leader, Ayatollah Ali Khamenei, called the attack a “slap in the face” of the US, and observers seem to question whether the attack was designed to kill or inflict casualties, or was it carefully orchestrated to produce closure to a situation which could have escalated into a regional or perhaps world war. Iraqi Prime Minister Adel Abdul Mahdi said he was informed of the attack by Iran ahead of time, which acted as a safety valve after he, in turn, informed US commanders.

Iraqi militias may now begin attacks of revenge for the US assassination of the Iraqi militia commander Abu Mahdi al-Muhandis, who died alongside Soleimani in the drone strike on Friday.  Iraqi militia leader Qais al-Khazali said today his group’s retaliation should be “no less than the size of the Iranian response.”

Al-Muhandis was the deputy head of the Popular Mobilization Forces (PMF), an Iraqi militia group that is an official component of the Iraqi armed forces.  Previously, the US had attacked Iraqi PMF troops in Qaim and killed 24 Iraqi soldiers and wounded dozens more.  The Iraqi military, militias, and government consider the recent US attacks on Iraqi troops and leaders on Iraqi soil as an act of aggression and more than enough reason to request the US military leave Iraq.

U.S. Defence Secretary Mark Esper, said Monday the United States “has made no decision whatsoever to leave Iraq,” seemingly oblivious to the fact the Iraqi parliament voted on Sunday to oust 5,200 US troops. Esper has repeatedly reaffirmed that the U.S. was not pulling troops out of Iraq.

The US has around 5,000 troops deployed in Iraq, with plans to send in another 3,800 American paratroopers, and an additional 4,000 troops that may be sent. US forces withdrew from Iraq in 2011, but returned in 2014 at the invitation of the Iraqi government to fight ISIS; however, that fight is over, and Trump angered the Iraqi government when he said the only reason he was leaving troops in Iraq was to watch Iran. There were anti-US sentiments brewing in Iraq since the 2003 invasion, which perceived the US military to be an occupation force, and unwelcomed, but after the Trump statement about his main mission in Iraq, the calls for “Yankee Go Home” grew louder and included groups who had not previously called for the ouster. The US military has admitted they have sidelined work against ISIS to focus on self-protection of troops. 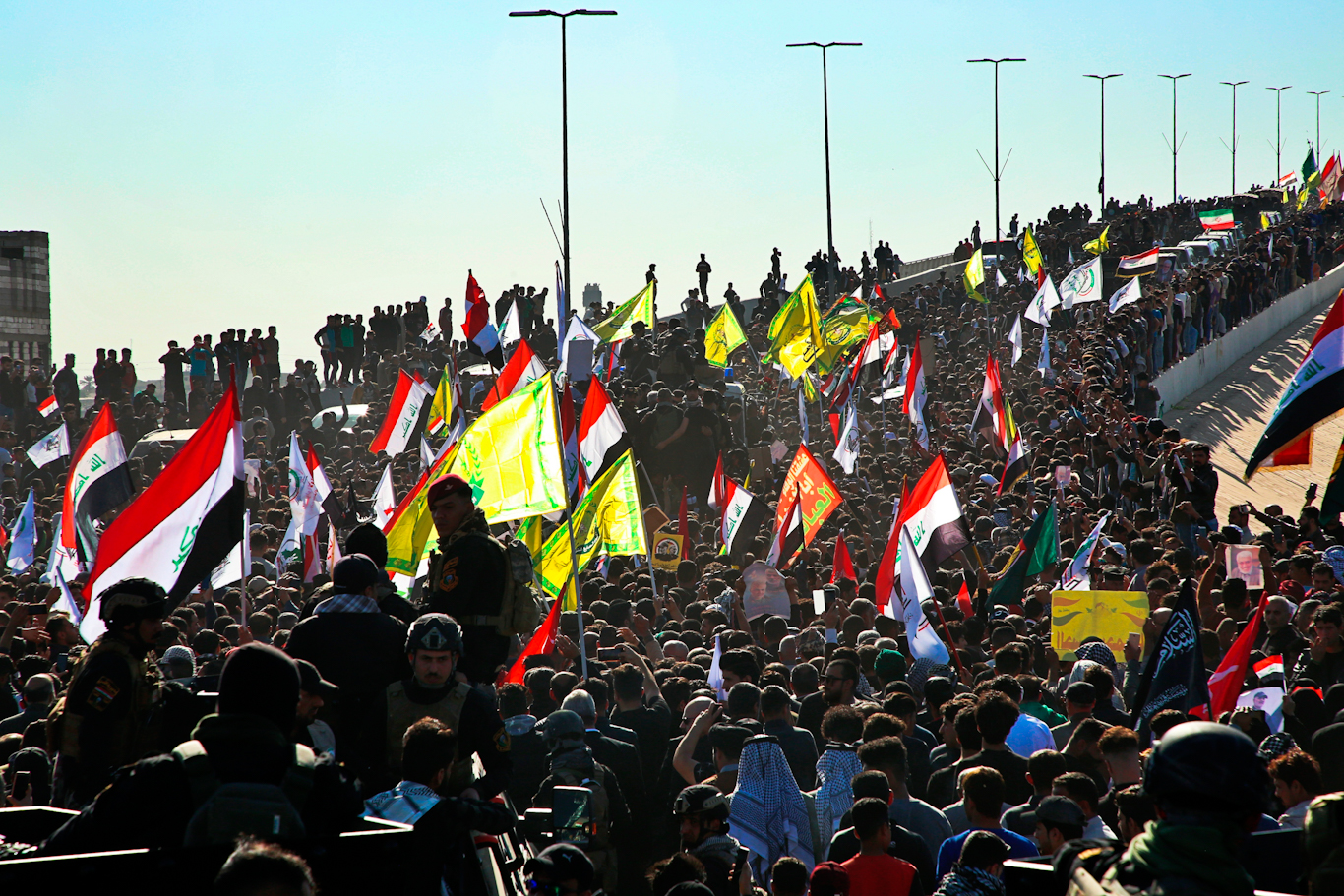 PM Abdul-Mahdi asked parliament on Sunday to take “urgent measures” to ensure the removal of foreign forces from the country, and on Monday, PM Abdul-Mahdi met with US Ambassador Matthew H. Tueller and stressed the need for the two countries “to work together to execute the withdrawal of foreign troops from Iraq,” and added the situation in Iraq was “critical.” American troops in Iraq are in the country based on a request by the then prime minister, Nouri al-Maliki, in 2014. That request can be revoked by parliament, and indeed, a recent parliamentary resolution to that effect passed 173 to 0, although 156 MPs boycotted it, but clearly, it passed by a majority and united some factions previously at odds. Sajad Jiyad, managing director of Bayan Center, an Iraqi think tank said, “Even people nominally pro-U.S., anti-Iran or neutral are not happy with what the US has done, and believe it’s a dangerous escalation,” and added, “The common denominator is this was an infringement on sovereignty.”

On Monday, PM Abdul-Mahdi received a letter from Marine Brig. Gen. William Seely III, commander of ‘Task Force Iraq’, declaring the US intention to withdraw, and with specific details about the exit. The letter was sent twice, and the copy that Abdul-Mahdi has in his possession is signed, and he added,  “It’s not like a draft, or a paper that fell out of the photocopier and coincidentally came to us.” Strangely, Trump said he thought the letter was a ‘hoax’, and his officials Esper and Pompeo denied any letter of the kind was signed, or official. Abdul-Mahdi took to the Iraqi TV to broadcast his exasperation with conflicting U.S. signals, and said: “We have no exit but this, otherwise we are speeding toward confrontation.”

The stated long-term goal of Iran’s reprisals is to remove US troops from the region. Supreme Leader of Iran, Ayatollah Ali Khamenei, said “This region won’t accept the US presence. Governments elected by nations won’t accept the presence of the US.” Iranian President, Hassan Rouhani, early Wednesday warned that the US forces would be removed from the Middle East, saying: “You cut off Soleimani’s hand from his body, your feet will be cut off from the region.”

Poland evacuated its ambassador in Iraq, and the Philippine government has ordered the mandatory evacuation of Filipino workers from Iraq. Germany has announced they will withdraw troops from Iraq, as well as Spain, Croatia, and Romania. France says they are staying. There are about 2,900 European troops in Iraq.  Trump has asked NATO to send more troops to Iraq; however, NATO troops are leaving Iraq.

Trump’s 2016 campaign promise was an “America First” policy, and he promised to reduce US involvement in foreign wars. However, his decision to bomb Iraqi militias and assassinate Iran’s commander Soleimani in a drone strike caught Middle Eastern and European allies unaware and confused. Since then, the US has given off conflicting signals on its intentions to exit Iraq even while it deploys more troops immediately for protection.

The US media uses the phrase ‘Shia militias backed by Iran’ to identify the PMF; however, this is misleading and verges on propaganda.  The PMF is an Iraqi militia and part of the Iraqi armed forces. The fact they are mainly comprised of Shias should not be a surprise, given the fact that Iraq is overwhelmingly populated by Shias. Iran is a neighboring country and is also mainly Shia.  Iran supports Iraq, their armed forces, and their militias. Iran supports a ‘resistance’ philosophy: that is resistance to the occupation of Palestine, Lebanon, Syria, and Iraq. Iran is inside Iraq at the official request of the Iraqi government. The fundamental division between the US and Iran is this ‘resistance’ philosophy, which has become ingrained in the mentality of the majority of residents in the Levant, but which the US fails to recognize or understand.  Iraq also has Sunni militias, and they are Al Qaeda and ISIS, while Iran, Iraq, and Syria are all fighting those terrorists.

Steven Sahouni is an independent Syrian political analyst and writer based in Lebanon; he has been covering the Syrian crisis since it’s onset in 2011 and has published several articles in numerous media outlets – He is regularly interviewed by US, Canadian and German media.

This article was published with special permission from the author. It originally appeared at Mideast Discourse.