Terrorist group Islamic State (IS, formerly ISIS/ISIL) has launched a new propaganda campaign against the West, threatening US & EU… 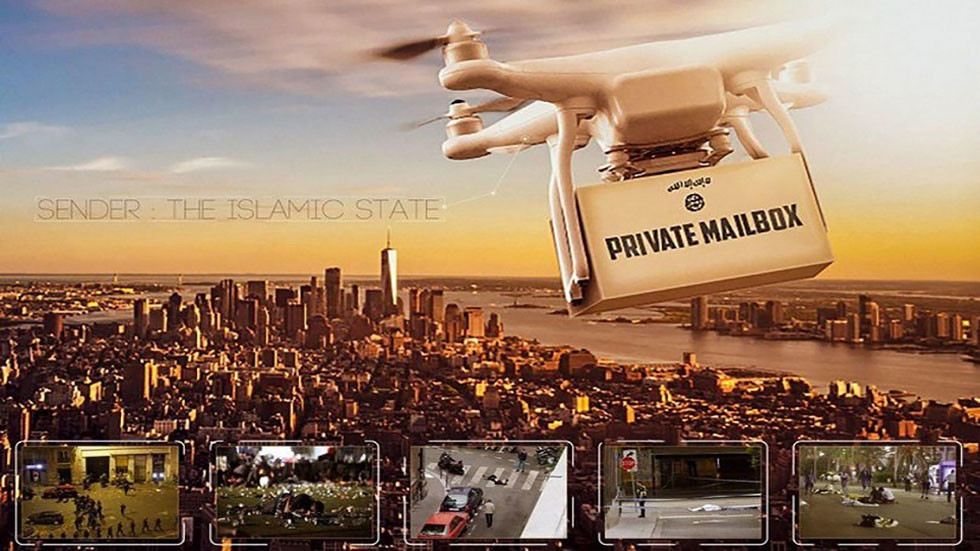 Terrorist group Islamic State (IS, formerly ISIS/ISIL) has launched a new propaganda campaign against the West, threatening US & EU cities with drones, in a new poster prompted by the travel chaos at London’s Gatwick Airport.

The post, circulating on social media, shows a photoshopped image of a drone carrying cargo with the terrorists’ logo, ominously flying over New York city, with five separate scenes of carnage at the bottom, seemingly the aftermaths of attacks on Western cities carried out by IS.

Attached is the tagline: “Sender: The Islamic State.”

Also on rt.com Air traffic out of control: Gatwick caught short by drones over the runway

It comes on the back of travel chaos that has brought London’s Gatwick Airport to a standstill due to drones hovering in the skies above. All departing flights had to be grounded and incoming planes diverted to other airports, including Dublin, Glasgow, Amsterdam and Paris.

The airport finally reopened on Friday morning after the runway had been closed for more than 24 hours.

Police are still looking for the drone operators with reports that an ‘eco-warrior’ could be behind the incident. According to the Telegraph, Whitehall sources said police were investigating the possibility of a ‘lone wolf eco-terrorist’ being responsible for the drones.

The motivation for such a perpetrator may stem from plans to expand the Sussex airport. Gatwick is currently seeking permission to use its standby runway in conjunction with its main runway, to increase its capacity, it says, from 20 to 30 percent.

It comes as the British Airline Pilots’ Association claims that their worries over the incident have not been eased, adding they are not aware of any special advice that has been given to pilots flying in or out of Gatwick.

They say they are “extremely concerned at the risk of a drone collision” and understand that “detection and tracking equipment has been installed around the perimeter of Gatwick.”

BALPA remains extremely concerned at the risk of a drone collision. It is possible that the rogue drones may go undetected around the perimeter or could obstruct the flight paths outside the immediate detection zone. (5/7)

Transport Secretary Chris Grayling said the military and police “genuinely don’t know” who the culprit is, reports the Daily Mirror.

Asked by BBC Radio 4 if a foreign power could be responsible, Grayling replied: “We genuinely don’t know who it is or what the motivation was. I think it’s unlikely to be but at the moment I’m not ruling out anything.”