When you’re thrown behind bars, not much is more important than a phone call. And while a lot of attention…

When you’re thrown behind bars, not much is more important than a phone call. And while a lot of attention has been paid to the exorbitant rates and hidden fees of phone calls from federal and state prisons, the cost of calling from city and county jails remains largely unchecked, preventing many prisoners—the majority of whom are pre-trial—from communicating with loved ones or lawyers.

According to a new report this week from the nonprofit research organization Prison Policy Initiative, the average cost of a phone call from jail is over three times as much as one from prison. In some states, it’s much higher than that: In Michigan, a 15-minute call from jail could cost as much as $ 22, whereas that call from state prison would come out to just under $ 2.50. In Illinois, a typical jail call is over 50 times more expensive than a call from state prison. 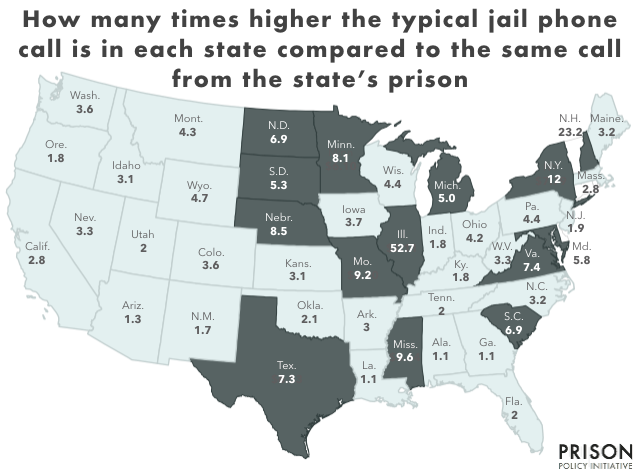 The report focuses on jails and state-run prisons only. Federal prisons are overseen by the Federal Bureau of Prisons and have separate contracts and rates.

The cost disparity between state prisons and jails is particularly jarring given that 65 percent of jail inmates are awaiting a court decision, according to Bureau of Justice Statistics, meaning they’ve yet to be found guilty (or innocent) of a crime. “These are folks who are not convicted of anything. They’re still legally innocent,” says Peter Wagner, executive director at Prison Policy Initiative and co-author of the report. “The state should not be putting up barriers that make it harder to make bail or harder for them to keep their families together or harder for them to prepare for their defense.”

In the past several years, there has been significant progress in bringing the costs of calls from correctional facilities down. Increased attention and pressure from affected families led the Federal Communications Commission (FCC) in 2013 to cap the cost of out-of-state calls for jails and state and federal prisons, in addition to cracking down on hidden fees. But the vast majority of calls from jails and prisons are made in-state, and in 2017, an appeals court struck down a 2015 FCC attempt to limit rates within states, ruling that such regulation exceeded the commission’s statutory authority.

Last year, Sen. Tammy Duckworth (D-Ill.) introduced bipartisan legislation that would close the gap between in- and out-of-state calls and allow the FCC to regulate intrastate calling for prisons and jails. Trump-appointed FCC Chairman Ajit Pai signaled potential support during his confirmation hearing and has consistently agreed that costs are too high, but in practice has stymied regulation of prison phone rates in the past. Duckworth’s bill stalled in committee.

On the bright side, movement for reform has continued at the state level while further federal progress is pending. Most state prisons have cut call costs considerably. In Illinois, the price of a 15-minute phone call dropped dramatically from an average $ 6.14 in 2008 to $ 0.14 today.

But jails have not benefited from the same kind of rate reductions as state prisons, with the exception of New York City, which made jail calls free last year. (According to the report, the cost of calls from jails across the country has in fact decreased, just by far less.) 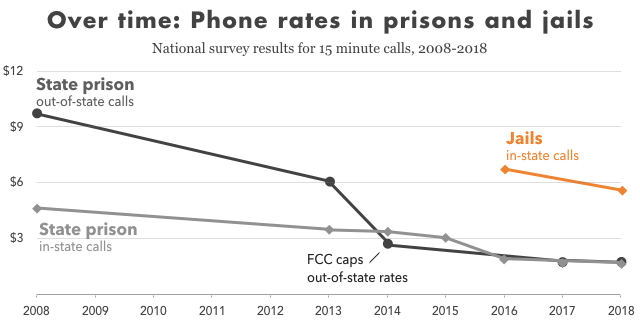 The growing discrepancy is caused by a number of factors, the report points out. The turnover in jails is much higher; prisoners are in and out, so there are fewer people advocating for change long-term. “The people that are inside there are passing through, so they don’t generate the critical mass to get coverage to create political discussions,” Wagner says. “State prisons get pressure from the families directly and then indirectly via the legislature to lower the cost of phone calls home.”

What’s more, prison phone providers take advantage of the relative lack of familiarity many encountering the jail system have. Those communicating to and from jail are often less aware of and unable to navigate the many hidden charges tacked on to the already elevated call rates. For example, Securus, a major provider, encourages people to pay for each call individually rather than setting up a pre-paid account, so they incur an extra charge every time. The report highlights a case where call recipients unwittingly face a $ 3 “one-time transaction” per call. When it comes to some of these hidden fees, “prison families would get word not to pay that way,” Wagner says. “It’s the kind of thing that really preys on jail families.”

Importantly, these fees can be disadvantageous not just prisoners, but also for the facilities, whose contracts vary state to state or jail to jail, depending what each works out with the providers. Jails and prisons often make commission on the number of calls made not the attached fees, the report notes, so if people are unable to make calls due to prohibitive costs, it ostensibly hurts everyone except the phone companies. But jails are run by local governments. They’re smaller and have less flexibility and sway to negotiate complex contracts with sophisticated prison phone providers, a billion-dollar and oft-criticized industry. In the meantime, as Mother Jones has reported, providers are solidifying their grasp by bundling services, pairing phone calls with video calling and even money transfers for commissary accounts. The few companies that offer these services are also consolidating, meaning fewer options and less leverage for correctional facilities wanting to negotiate better contracts. Currently, two companies, Securus and GTL, dominate the market. The FCC is currently reviewing the acquisition by Securus of another competitor, ICSolutions.

Poll: Black Americans Think Racism Is a “Major Threat” and Getting Worse

The Alternative to Police That Is Proven to Reduce Violence

Are Police Helicopter Fleets Worth the Money?

Republicans Hoped a “Crime Wave” Was Their Ticket to a Red Wave. It Wasn’t.

The Long, Scary History of Doctors Reporting Pregnant People to the Cops