How many people have been killed in the post-9/11 war on terror? The question is a contentious one, as there…

How many people have been killed in the post-9/11 war on terror? The question is a contentious one, as there has been no formal accounting for the deadly cost of the initial U.S. interventions in Iraq and Afghanistan, not to mention the secondary conflicts that continue to wreak havoc across the Middle East and the opaque, covert war still expanding across Asia and Africa.

But even as the U.S. government evades responsibility for the human cost of its overseas endeavors, some researchers are determined to keep count.

Brown University’s Costs of War Project this month released a new estimate of the total death toll from the U.S. wars in three countries: Iraq, Afghanistan, and Pakistan. The numbers, while conservatively estimated, are staggering. Brown’s researchers estimate that at least 480,000 people have been directly killed by violence over the course of these conflicts, more than 244,000 of them civilians. In addition to those killed by direct acts violence, the number of indirect deaths — those resulting from disease, displacement, and the loss of critical infrastructure — is believed to be several times higher, running into the millions.

The report, which uses data spanning from October 2001 to October 2018, compiles previous analysis from nongovernmental organizations, U.S. and foreign government data, and media reports. In a statement, the report authors said the figures still just “scratches the surface of the human consequences of 17 years of war.” Due to challenges in data collection, their total estimate is an undercount, they added. The study also focuses on only the three countries where the United States launched its so-called war on terror. If the conflicts in Libya, Yemen, Somalia, or Syria — where the U.S. has conducted major military operations in recent years — had been included, the death toll would likely be significantly higher.

Some American politicians have lately evinced a refreshing willingness to make call for public accountability for the war in Yemen, where Saudi Arabia is the party that is doing the immediate harm to civilians, albeit with logistical support and weapons from the U.S. But there has been far less appetite to similarly criticize, or even account for, the many conflicts in which the United States is directly responsible for the violence — despite monumental death tolls, refugee crises, and other sobering evidence of human suffering.

“With everything going on in the United States at the moment, the fact that we’re even at war has largely fallen off the radar.”

“The major challenge in tracking the full costs of these wars is that the U.S. military doesn’t even meaningfully investigate civilian death tolls. Generally, they know it’s not good to have civilian casualties, but their focus is mainly on fighting, and there is little pressure to make protecting civilians a key priority,” said Daphne Eviatar, director of the Security With Human Rights program at Amnesty International USA. “Meanwhile, the U.S. public simply doesn’t see deaths in other countries. They don’t see civilians being killed in Iraq or Afghanistan. With everything going on in the United States at the moment, the fact that we’re even at war has largely fallen off the radar.”

The post-9/11 wars in Afghanistan and Iraq have raged on for well over a decade now. In that time, both the nature of the warfare and the enemies the U.S. is at war with have evolved. In addition, the initial invasions have generated violent new conflicts across the region between local governments and non-state actors, some of which the U.S. is also involved in.

Although public attention has almost completely drifted from Afghanistan — the war there was not even mentioned during the last two 2016 presidential debates — the United States actually dropped more bombs in that country this year than in any year since the war began. American casualties have been minimized in recent years by a greater reliance on airstrikes over ground forces, something that has also helped take American minds off the war. But U.S.-allied Afghans fighting on the ground continue to pay a horrendous toll, with thousands killed this year in the face of advances by a resurgent Taliban.

Despite all these deaths, it remains highly questionable what exactly the United States has gained from these wars. The initial confrontation with Al Qaeda, a clandestine organization numbering perhaps a few hundred people at the time of the 9/11 attacks, has somehow metamorphosed into an endless war against an expanding universe of even more extreme terrorist groups, many of which did not even exist on September 11, 2001. Entire cities have been left in ruins, with the United States offering no coherent strategy for a return to stability, or even normalcy, in the places it has been at war.

“It matters how you fight and what you do afterwards,” said Eviatar. “Hundreds of thousands of people have now been killed in the name of fighting terrorism. We need to ask who has benefitted from this, who has suffered, and what the cumulative effects are.” 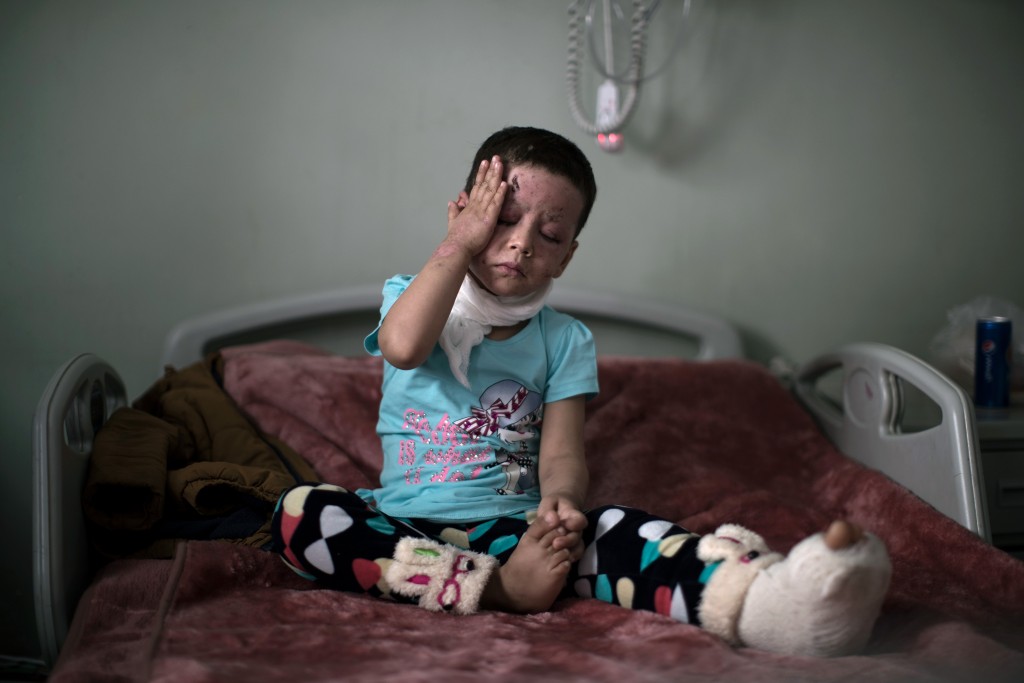 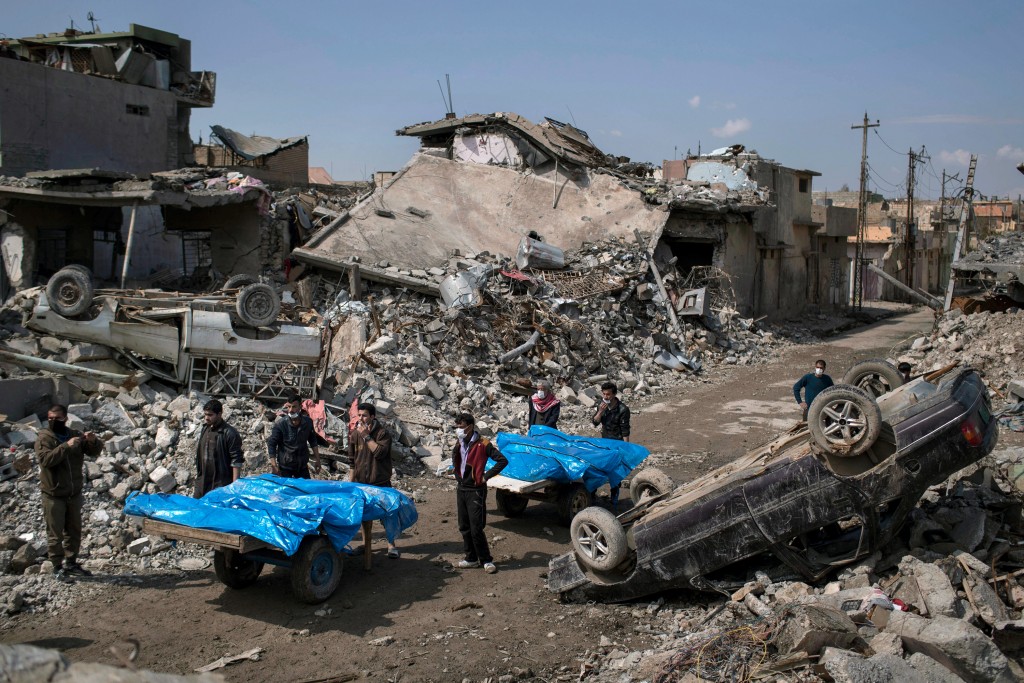 Left/top: Hawra Alaa Hassan, 4, who was badly burned in a U.S. airstrike in Mosul, at a hospital in Irbil, Iraq, on April 8, 2017. Right/bottom: Residents carry the bodies of several people killed during fights between Iraq security forces and Islamic State on the western side of Mosul, Iraq, on March 24, 2017.Photos: Felipe Dana/AP

Studies like the one published by Brown University add to a steadily growing body of scholarship showing the horrifying human costs of the wars. The media has also made some significant contributions to improving public awareness. Journalists Anand Gopal and Azmat Khan, for example, published a groundbreaking New York Times report last year on civilian casualties in Iraq. Their reporting showed the actual death rate to be a stunning 31 times higher than the one officially reported by the U.S. military. It can hardly be said now that the truth isn’t out there. But some experts say that it isn’t surprising that this information has failed to translate into public action.

John Tirman, author of “The Deaths of Others: The Fate of Civilians in America’s Wars,” a study of the impact on foreign civilians of American military operations, argues that psychological factors might help explain why Americans don’t seem to care about the human cost of their wars. Faced with a terrible situation requiring complex solutions and sustained attention, people are likely to just ignore it if they have the option to do so.

“They turn away … because the carnage challenges their strongly held self-perception that their country is a force for good in the world.”

“People tend to turn away from disasters such as a war gone bad very quickly. They turn away because it bothers them morally, but also because the carnage challenges their strongly held self-perception that their country is a force for good in the world,” said Tirman. “In the face of something horrible, people are much more likely to become indifferent than they are to protest. Oftentimes it’s even easier to just blame the victims for causing their own suffering.”

The Brown University researchers also reported the number of U.S. military deaths, which, unlike civilian deaths, the government generally keeps track of. Around 7,000 American soldiers have lost their lives in Afghanistan, Iraq, and Pakistan since 9/11. Roughly double that number of private contractors, who performed supporting tasks that in previous conflicts were handled directly by the military, have also been killed. Improved battlefield medical procedures have lowered the overall number of American deaths, but tens of thousands of Americans have also been wounded in battle, with many suffering grievous lifelong injuries.

During the Vietnam War, the institution of the draft forced the public to maintain at least some basic level of awareness about the war. But the creation of an all-volunteer military has made the conflicts much easier to ignore. As public attention has waned, it has become easier for the U.S. government to obscure its own role in helping foment violent crises that have sent waves of desperate refugees streaming across the world. It has also helped deflect attention from wartime expenditures that are now estimated to have sucked up over $ 6 trillion in public funds — money that could have done much good in a country that is starving for infrastructure and public health spending.

While Americans continue to search for explanations for their own eroding domestic national stability, the wars that continue to rage outside of public notice may help explain some of the ugly direction of U.S. politics in recent years.

“There is a perverse dynamic at play, in which we’re killing more people, creating adverse consequences like mass displacement and refugees, and then banning those very people from our shores,” said Hina Shamsi, director of the American Civil Liberties Union’s National Security Project. “We really need to question both the fairness and necessity of these policies, which are inflicting devastating human costs abroad while harming our own civil rights at home.”