California Gov. Jerry Brown signed a bill into law Thursday that prevents cities and counties in the state from levying… 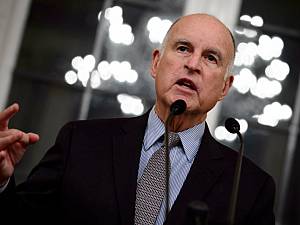 California Gov. Jerry Brown signed a bill into law Thursday that prevents cities and counties in the state from levying sales taxes on groceries, including soda and other sugary beverages, through 2030.

Sounds great, right? On the surface, yes, but Brown and other Democratic lawmakers in the state weren’t motivated by a desire to protect citizens from excess taxation. Rather, Brown signed Assembly Bill 1838 in an effort to ensure that California localities can keep on increasing other types of taxes.

The bill, which passed with overwhelming support in both houses of California’s legislature, is the result of a compromise between lawmakers and the beverage industry, which was supporting a statewide ballot measure that would have made it difficult for cities and counties to raise all local taxes. Had the ballot measure passed, local tax increases would have needed the approval of two-thirds of voters rather than just a simple majority.

In a signing statement addressed to the California State Legislature, Brown assured lawmakers he understands that soda taxes “combat the dangerous and ill effects in the diets of children,” but indicated he had no choice in the matter. Just four cities in the state are currently passing soda taxes, he wrote, while indicating that the tax initiative had the potential to affect all 482 cities in California.

He also noted that the ballot measure would have restricted “the normal regulatory capacity of the state by imposing a two-thirds legislative vote on what is now solely within the competency of state agencies.” Such a restriction, Brown believes, “would be an abomination.”

The ballot initiative, which was formally withdrawn within minutes of Brown signing AB-138 into law, would have had a significant impact on local tax increases. According to California’s nonpartisan Legislative Analyst’s Office (LAO), about half of local tax measures approved by voters since 2012 did not receive two-thirds support. Those measures have raised hundreds of millions of dollars in tax revenue each year, the LAO said.

The initiative did have some support in the state legislature, particularly among several Republicans who weren’t happy it was withdrawn and didn’t think AB-1838 was a particularly good compromise.

“This bill tells one million people that signed this petition to make it harder to raise their taxes that their voices don’t matter,” said state Sen. Jeff Stone (R–Temecula), according to the Los Angeles Times.

Assemblyman Matthew Harper (R–Huntington Beach), blasted Democrats who voted in favor of AB-1838 even though they support soda taxes. “Don’t cry your crocodile tears at me,” Harper said.

Indeed, there were many Democrats who said publicly they didn’t like AB-1838 but ultimately voted yes on the measure.

“I think this is a terrible decision that we’re making,” said Assemblyman Kevin McCarty (D–Sacramento), who still supported the bill.

State Sen. Scott Wiener (D–San Francisco), couldn’t bring himself to support AB-1838, but said he understood many of his colleagues felt like they had to do so. He claimed the beverage “industry is aiming basically a nuclear weapon at governing in California and saying if you don’t do what we want, we’re going to pull the trigger and you are not going to be able to fund basic government services.”

“This is a pick-your-poison kind of situation, a Sophie’s choice. What the legislature is doing is perfectly reasonable,” Wiener added, according to The Sacramento Bee.

In essence, Brown and other lawmakers supported AB-1838 because they didn’t want to give taxpayers a bigger say in government. The result is passage of a bill that no one seems to actually like.

The Oppressive Mask “Mandates” Finally Go Up In Flames

The Mother of all Economic Crises