A United Kingdom court has ruled that Wikileaks cofounder Julian Assange must remain in prison, despite an earlier ruling that…

A United Kingdom court has ruled that Wikileaks cofounder Julian Assange must remain in prison, despite an earlier ruling that he could not be extradited to the United States.

Explaining her decision, District Judge Vanessa Baraitser said that, “As far as Mr. Assange is concerned, this case has not been won,” adding that the United States must be allowed to appeal her earlier decision. Part of the ruling was based upon her assessment of the Australian publisher being a serious flight risk if released, noting he had “huge support networks” that could help him “should he again choose to go to ground.”

The court’s decision was immediately panned by journalists and press freedom organizations who had hoped to see Assange released today, after seven years in prison and hiding in the Ecuadorian Embassy in London. “To us, that is nothing more than a pretext to keep him detained. This seems unnecessarily punitive and adding insult to injury after the 10 years of hell that he has endured…We are deeply disappointed with today’s decision,” said Rebecca Vincent, Reporters Without Borders’ Director of International Campaigns, outside the courtroom.

Vincent had been denied entry to the courtroom today, as had some of Assange’s relatives. She had also faced questioning and harassment from police, who used their new powers under the U.K.’s lockdown law to break up pro-Assange demonstrations, even arresting a 92-year-old man. 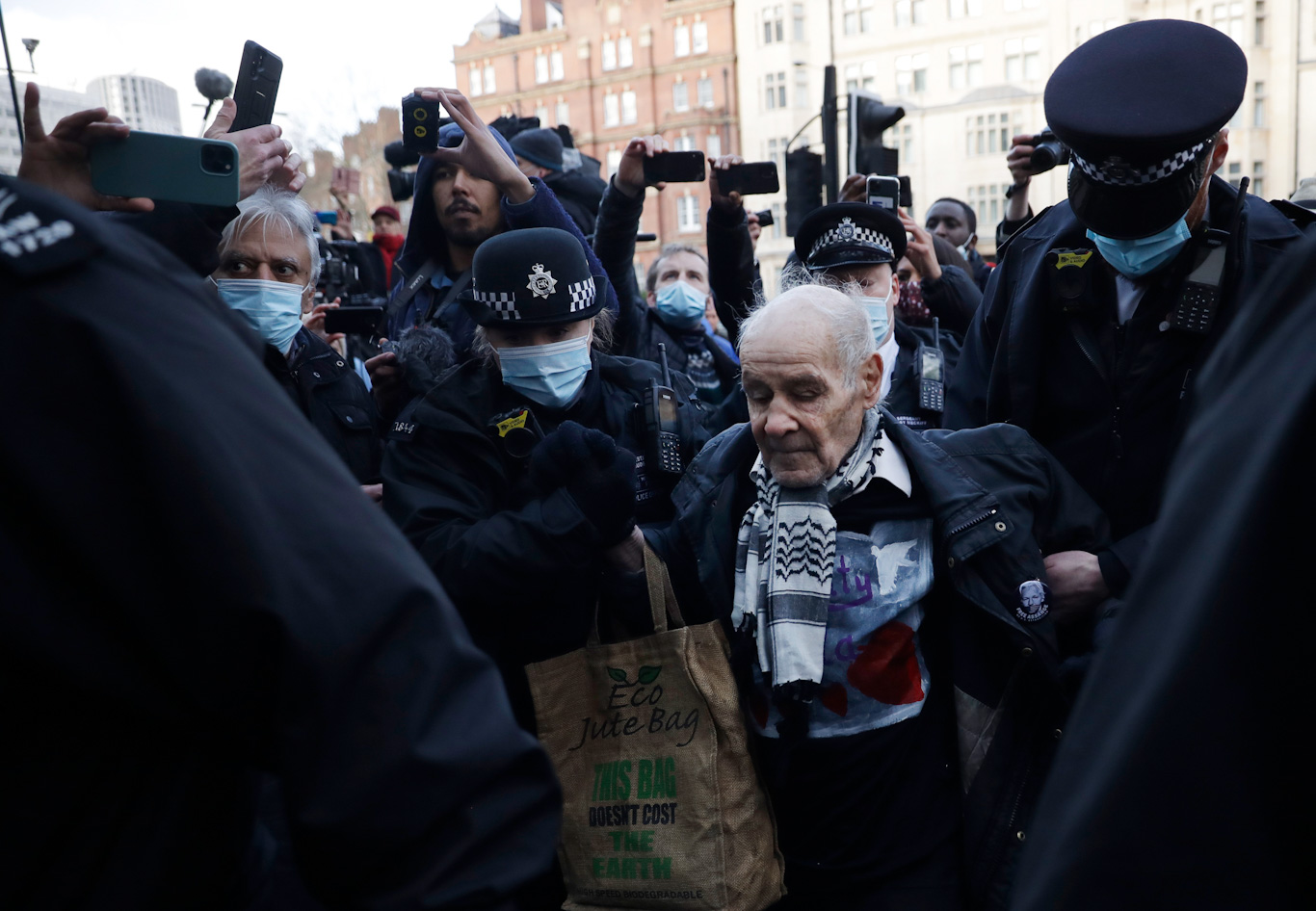 Assange’s lawyer, Edward Fitzgerald QC, expressed his disappointment at the news that his client would be heading back to Belmarsh prison in south London. “The logical outcome of the ruling would be he regains liberty at least conditionally,” he stated.

@Rebecca_Vincent of @RSF_inter
“condemned” Judge Baraitser’s decision to refuse Assange bail as “unnecessarily cruel” saying that he should be freed from prison and reunited with his family.

Assange’s colleagues in [alternative] media were also quick to condemn Baraitser’s ruling. “The judge’s decision against bailing Assange only fuels the theory that this prosecution is about keeping a publisher who the U.S. government despises tied up and in limbo so he cannot effectively challenge them ever again,” said Kevin Gosztola, “This is absolutely outrageous for the judge to deny Assange bail and to claim that Belmarsh is doing a fine job of handling COVID, even while London is on lockdown.”

“There are no charges pending against Julian Assange in the U.K. A U.K. judge denied the U.S.’s request to extradite him, the only place where charges are pending. Despite this, the judge just ruled he must remain imprisoned — in a COVID-ridden high-security prison — while the U.S. appeals,” added Glenn Greenwald. “This shows how authoritarian the British judiciary is. The only thing the U.S. cares about is keeping Assange in a cage, silenced and disappeared. This gives them the best of all worlds: he stays in prison, with no need to prove he’s guilty of anything. That’s despotic.”

Julian Assange’s bail was denied even after UK Judge ruled against extraditing him to the U.S. There are NO CHARGES against this Australian citizen in the UK

Let’s just call this what is is…a kidnapping by the UK on behalf of the U.S.

A particularly high-security prison, H.M.P. Belmarsh is generally considered the U.K.’s most notorious jail, taking in prisoners from around the country that other prisons cannot handle. The government’s 2019 report on conditions inside the facility noted it was overrun with 120 violent gangs and that there were 161 recorded inmate assaults on staff. After a COVID-19 outbreak this year, inmates have been largely locked down in their cells, typically for 23 hours a day.

On Monday, Baraitser ruled that Assange would not be sent to the United States as she was not convinced that the U.S. prison system could guarantee he would not commit suicide while incarcerated. The publisher faced up to 175 years in prison for his alleged breach of the Espionage Act of 1917 while receiving classified information from U.S. soldier Chelsea Manning. However, she sided with the United States on both their assertions and the legality of their claims, setting a precedent that some called a “chilling” ruling for investigative journalism.

Wikileaks disseminated Manning’s information, which came to be known as the Iraq War Logs. Perhaps the most explosive revelation was a recording of a U.S. helicopter attack on central Baghdad in July 2007. The video shows American personnel massacring at least a dozen Iraqi civilians, including two Reuters journalists, in cold blood. The images went viral on social media and showed a completely different side to the occupation than the carefully sanitized one the U.S. military had been fastidiously curating.

From 2013 to 2019, Assange was confined to the Ecuadorian Embassy in London, unable to travel to the country that had offered him political asylum. However, keen to curry favor with Washington, new president Lenin Moreno allowed British authorities to enter the building and arrest him. Since then, he has been housed in Belmarsh. This new ruling prolongs his stay. But if the appeal is unsuccessful, the U.K. will no longer have any legal argument to keep him interned. Perhaps there is light at the end of the tunnel for the Australian.

Feature photo | Wikileaks spokesman Kristinn Hrafnsson, at center, speaks to the media outside the Westminster Magistrates Court after Julian Assange was denied bail at a hearing in the court, in London, Jan. 6, 2021. Matt Dunham | AP

Cuba is Testing Products Against Cancer, Alzheimer’s and Parkinson’s Disease

Houthis Anticipate US Assassination Attempts, Warn US Troops Will Be Targeted in Retaliation